Is an external journal worthwhile for ext4 on a modern system?

Reading through the Arch performance wiki I came upon this. I could definitely see using an external journal being worthwhile for an HDD, but maybe not an SSD. Almost definitely depends on hardware pathways too. (spreading loads across multiple busses)

Sadly, I came upon a post indicating multiple ext4 partitions cannot share the same journaling device, but that’s over six years old and might be out of date. Will I still need to create a separate partition for each journal? Is this worth losing the data=ordered flag? 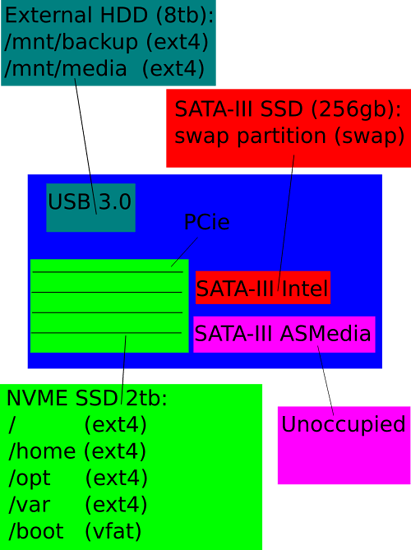 I was thinking I could add a SATA SSD on the Intel or ASMedia controller for handling the journaling of the ext4 partitions on my NVME and HDD disks. Will the better performance of the intel controller be worth swap and journal being on the same controller, as opposed to splitting them up between Intel and ASMedia?

Will having the NVME disk’s journals on SATA III actually reduce performance? At the most I could eventually see a system with two to three NVME disks in raid 0, and smaller fourth disk in raid 0 just for handling the journals, if enough PCIe lanes are present.

Overall, would it be worth investigating the movement of the journal to a separate disk to improve read / write times, and possibly speed up boot time?

Mixing NVMe with Sata will have a performance impact. There really is no need to have an external journal if you are using a SATA SSD or NVMe. I would not put in the effort as that would be a lot of work.

It would be much easier if you just had a ton of excess disks laying around for benchmarking purposes.