I have a 5.5gen IPod Classic (30 gb model, I only believe the case and battery are different) but I was wondering about storage limitations of the old hardware. I have converted the ipod to accept sd cards and i was wondering if it would accept 512gb cards ( I know that 256gb cards work) I've just never seen 512gb iPods before.

If you know of anything any info helps 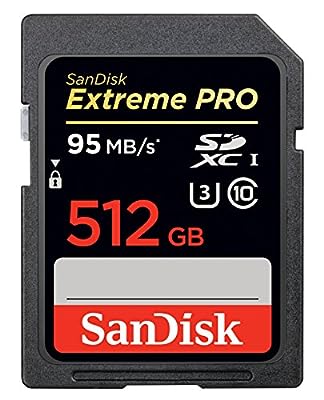 With write speeds up to 90 MB/s and recording at the UHS Speed Class 3 (U3) rating, our most powerful, highest capacity UHS-I SD memory card enables your DSLR, advanced digital or HD video camera to d ...

Realistically would you fill all 265GB with stuff you'd always want?
Also read something rather interesting about large capacity SD cards in the comments on a piece about ipods and sd cards.
The stupid high prices of such large SD cards would perhaps also urge a rethink about the 256 / 512 gb cards for me anyways.

"I think I have mentioned many many times before – all them ebay/amazon sold no name / Adata / Samsung SD or MicroSD cards in the following capacities 64Gb/128Gb/256Gb/512Gb/etc are all fake and at best they are reprogrammed 4Gb/8Gb/16Gb cards made to appear as higher capacity. People I have spoken to about this tell me they are generally factory QC failed cards which are bought by secondary sellers who reprogram them.

As of typing the only 512Gb cards in existence are PNY & Sandisk each costs over $400. In the 256Gb you only have cards made by Lexar/PNY/Kingston/Sandisk/Patriot/Sony/Hama/Transcend again all of these start from $100."

That was by the author of a popular guide on modding ipods to accept sd cards btw
EDIT Just noticed all the amazon reviews are for capacities no bigger than 64GB so going on what is said above I'd look for some testimony about the 512GB card to see if it is legit.
With that said however, I'm not exactly a Storage aficionado so perhaps someone with lots of video or photography knowledge could provide some insight about the whole capacity conundrum.