Intel May Use AMD GPU's On Their [email protected]#$ Intel may use AMD GPUs to challenge Nvidia's rising power

I thought this was a joke when I heard about it but no apparently thats legit.

AMD FTW! WE SHALL CONVERT THE WORLD! 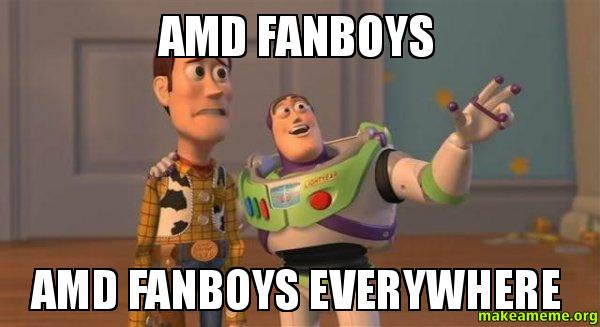 I like this because it means intel iGPU's will become better, AMD will profit from it, and there will be some AMD fanboys out there that get butthurt that AMD would cooperate with intel. 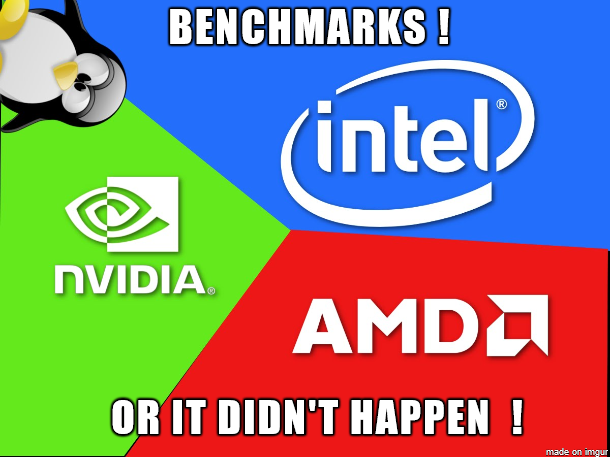 Why? Intel isn't doing that well with their gpu stuff. It's a black hole for them. Why not use what's available? And since Nvidia probably asked for too much, we are left with amd. They already have some cross patent agree and stuff for the X86 and the 64bit x86 etc etc. They will just have some extra stuff together.
On top of that AMD already support all possible standards, including the freesync, Intel have stated they will support.
They are basically spending less money to use and chips, instead of developing their own.

AMD fanboys out there that get butthurt that AMD would cooperate with intel.

Then they aren't fanboy enough to remember the fact that AMD licensed a particular instruction set to intel some years ago...

These are the new age fanboys, that don't remember anything about a world before 64 bit. They're the fanboys that think Intel and Nvidia are LITERALLY ran by Satan himself.

Have you seen Satan and Jen Hsun in the same place together? Just saying...

Speaking of Intel rumors, wasn't Intel going to stop supporting socketed cpu's by now? I remember reading how they were going to only supply surface mounted CPU's for motherboards in the future (which would probably be right about now).

Remember it's intel we're talking about here. By now their cpus should be significantly faster than sandy bridge, but they aren't. I mean those two things aren't as important as improving the igpu... or staying on the same node and architecture for 5 more generations

the more codependent these companies are, the more monopolistic the x86 marketplace will become (also, the better OSS support we'll get on the graphics side)

there's both good and bad.

I see this and think that it could be good, because we could get some really nice APUs from Intel, which is always good. Low end gaming rigs, and things like that would always benefit from that, and it would give more options for APU than just AMD and will hopefully make them more commonplace and keep them in the minds of the masses to help improve APU sales in general (I don't think that APUs get enough attention from the masses at the moment).

On the other hand, there could really be some downsides here. Intel could very well have gotten a deal with AMD where AMD makes practically no money off of it (like with other deals that AMD has made for things like the consoles), and then beat them in the APU market as well, taking that market away from them (which I think they have been trying to do for a while, and have been very unsuccessful at).

Either way, an increase in the number of decent graphics processors on cpus means that we could very well see better utilization of the hardware in a lot of different places that could really use it. Think, a widespread adoption of HSA. Improved performance and efficiency, which is always good. We will just have to see about all of this. I hope things go well, but there is almost no information about it at the moment, so I don't know.

my 2cents
this has a place on the very low end as a cheap itx mobo + 2-4 core cpu + apu that can do medium 1080p gaming for around 100-200 for the chip + mobo and 100~ for case/ram/psu/and a small drive. any more expensive and people will just buy a old 2nd or 3rd gen i5/7 workstation and throw in a gpu + ssd and maybe a better psu OR get a console. margins arent very good down at the bottom of the food chain and split between two companys, for intel this could be a way for their engineers to learn how to improve their igpus on their intel processors in the future. for amd, helping their competition does not make sense. however they are poor atm and they NEED money in a bad way. polaris, vega, and ryzen is a hail mary, this could be amds cash cow hedging their bets. the apu technology is valuable and while long term this could mean more competition from intel, but their wont be a long term if amd gets bought out or goes bankrupt. smart move for intel, and a desperate one for amd. but hey budget pcs will have a much cheaper low end maybe in a year or 2.

I was surprised to read this as well. Perhaps more background on this from this recent video. Intel may not be all roses, but getting a little fat and lazy.

Intel needs to stop spending fuck all on developing their iGPU and move that cash into pumping out faster cores... Didn't think it was as bleak as that video paints it for intel.

[Disheveled young man breaks into an Intel marketing meeting]
Hey, I'm an intern,
And this is Crazy:
Just clock up Skylake
And Call it Kaby

Slowly this will be on every cpu-related thread ever... This is only the 17th time I've seen it thus far.

fun fact: I am the originator.

the guy is a bit of a AMD fanboy. I do think people take Intel's success for granted. The desktop market is shrinking. And those of us with desktops are upgrading our CPUs less often. It says something when even enthusiasts are waiting 6 years to replace their CPU. And then its pretty safe to say AMD's market is going to grow from bulldozer to Zen, meaning even more shrinking for Intel.