Everybody’s favorite, Dr. Ian Cutress gets the early review out on RocketLake:

Intel’s Distributors in the EU sold it early and Anandtech got their hands on it and let Intel know.

Some info is still under NDA until it can be reported.

Here are the benchmark results: 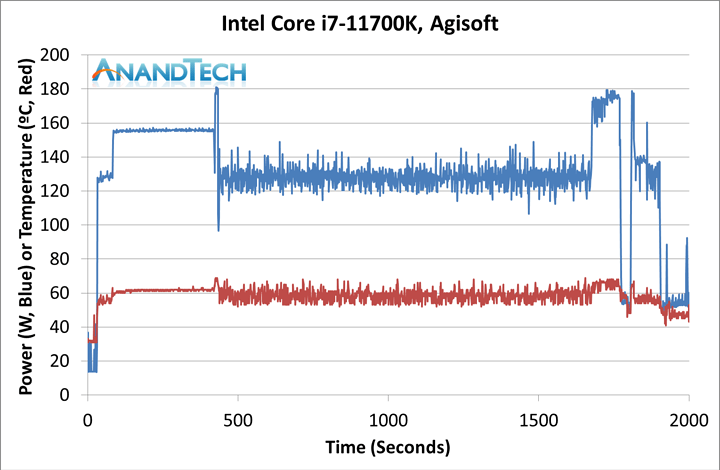 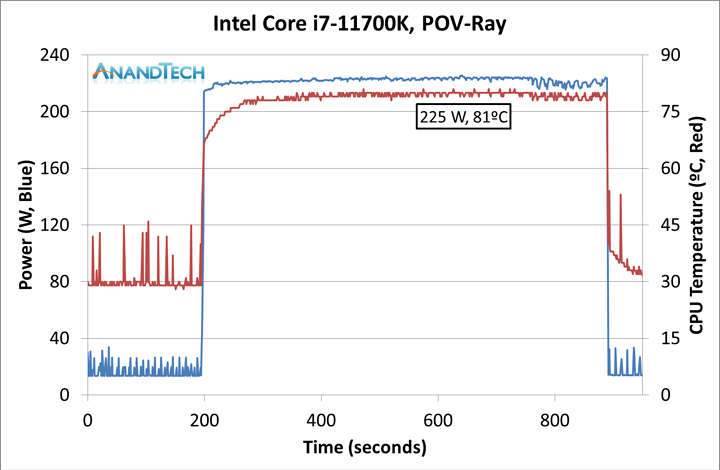 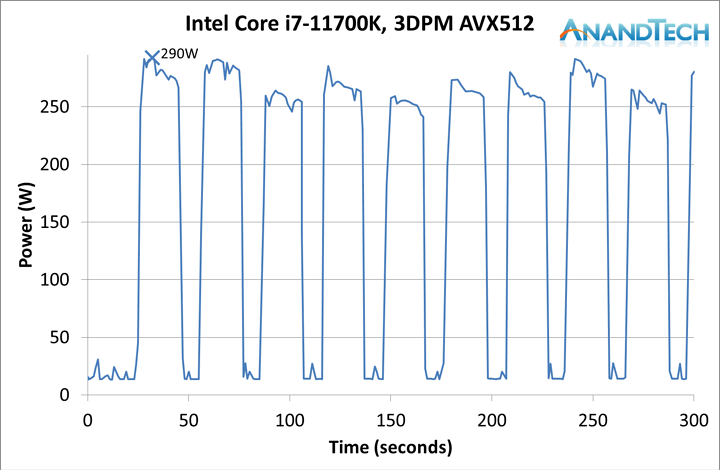 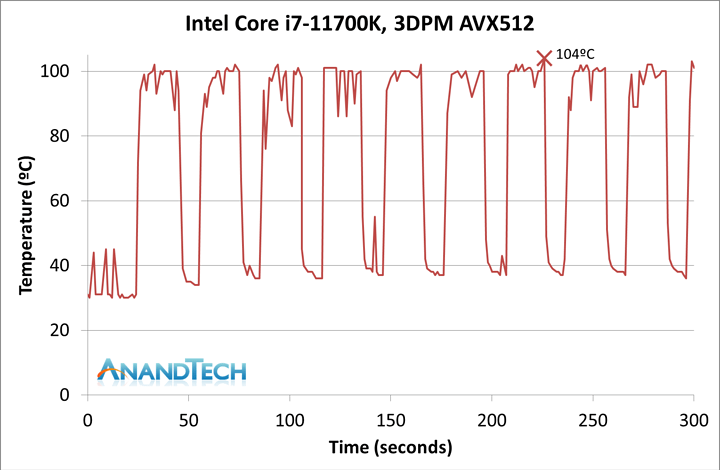 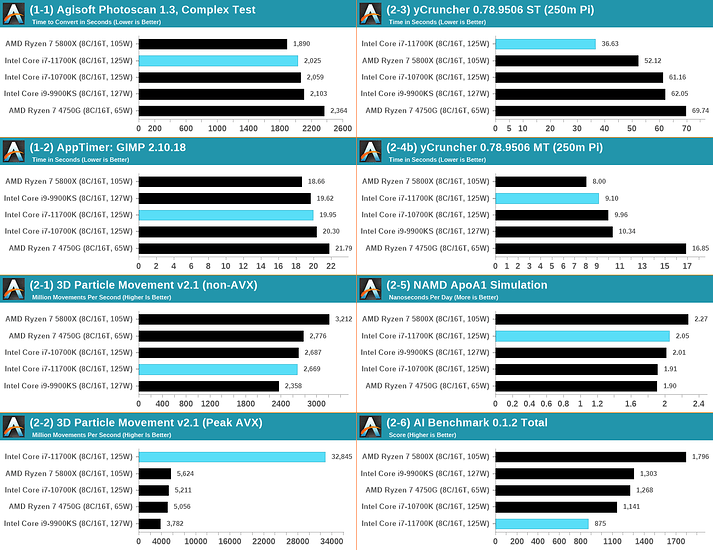 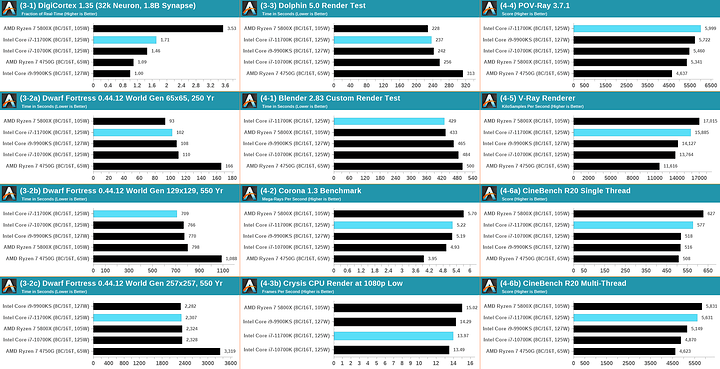 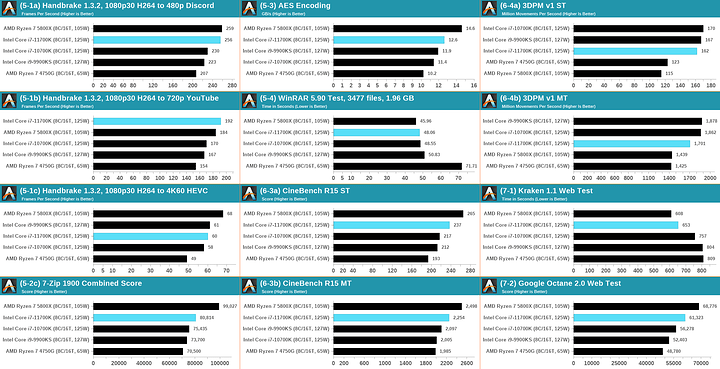 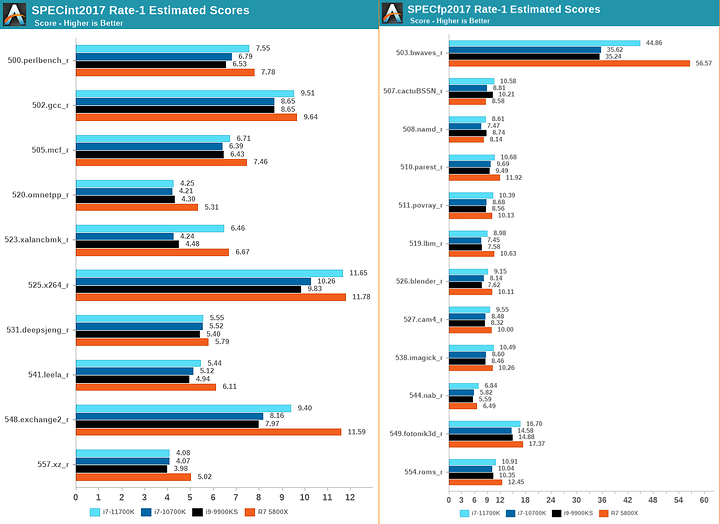 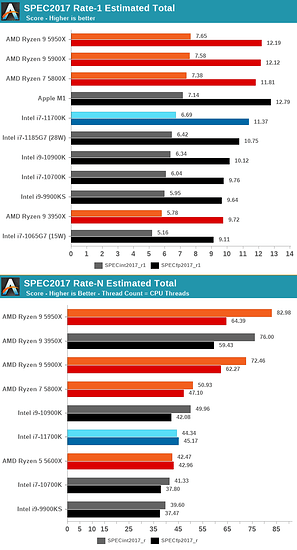 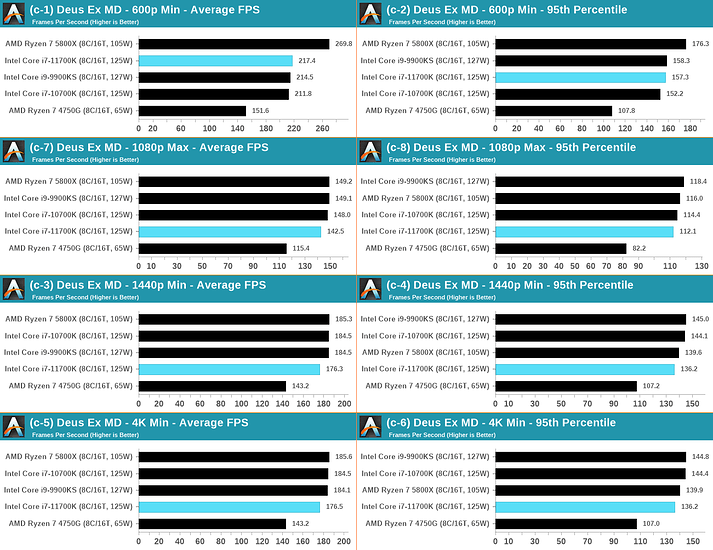 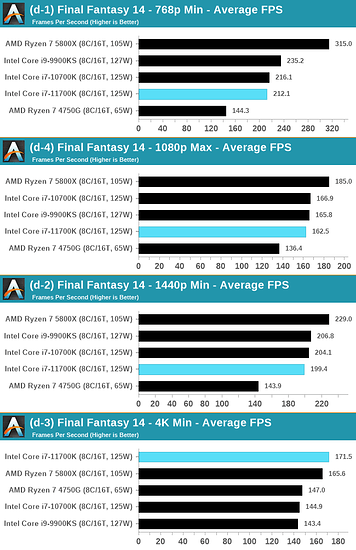 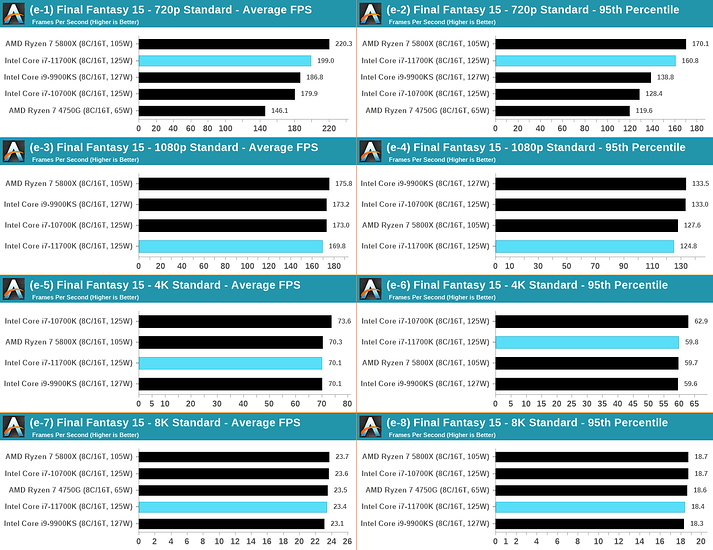 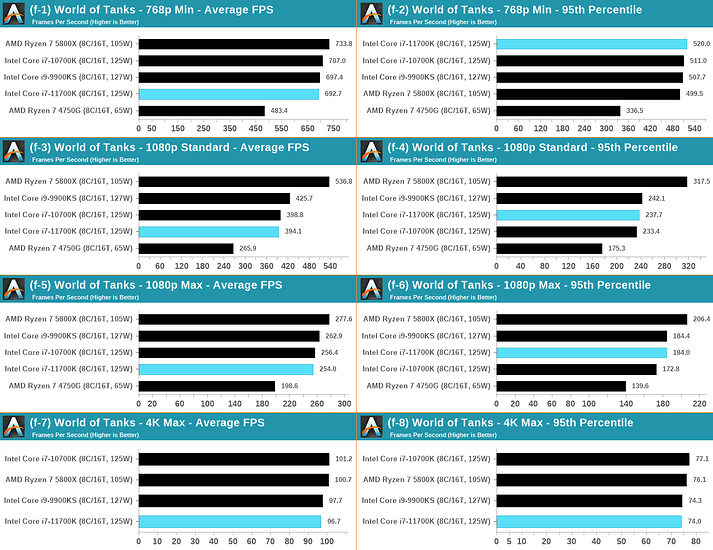 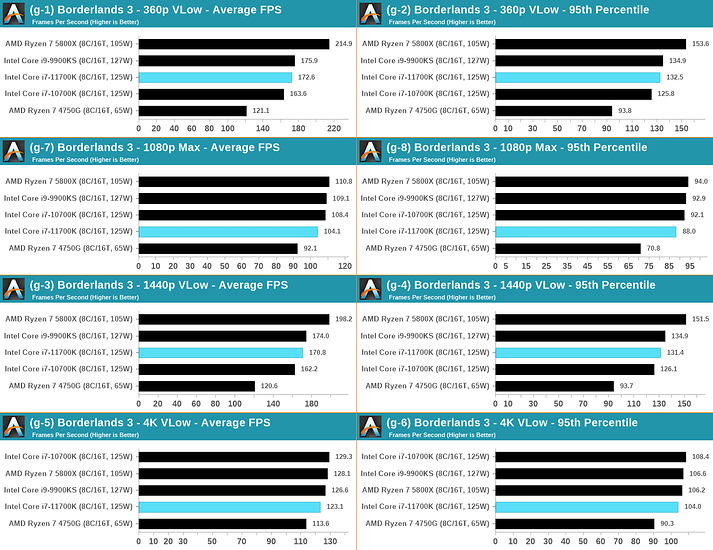 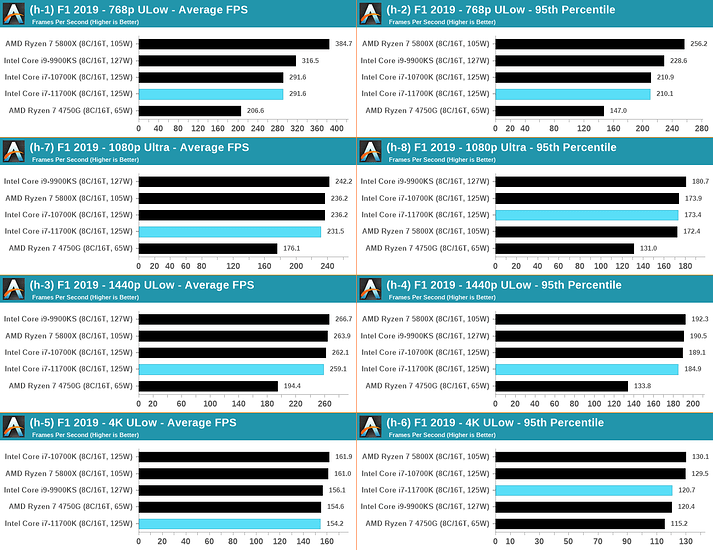 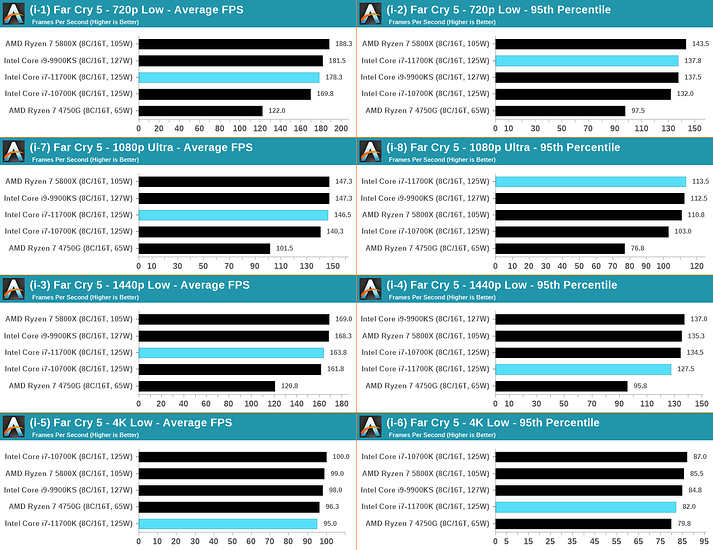 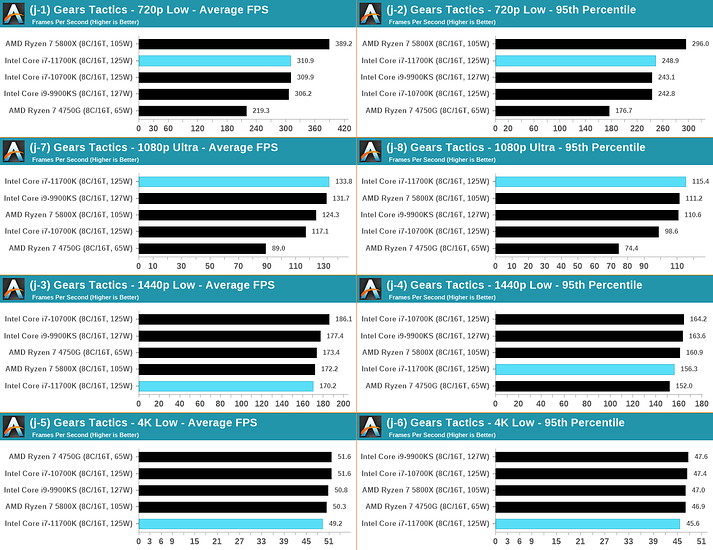 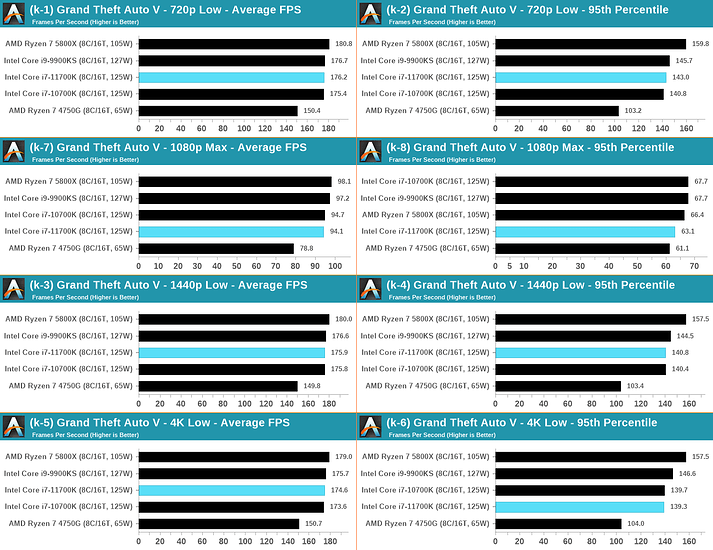 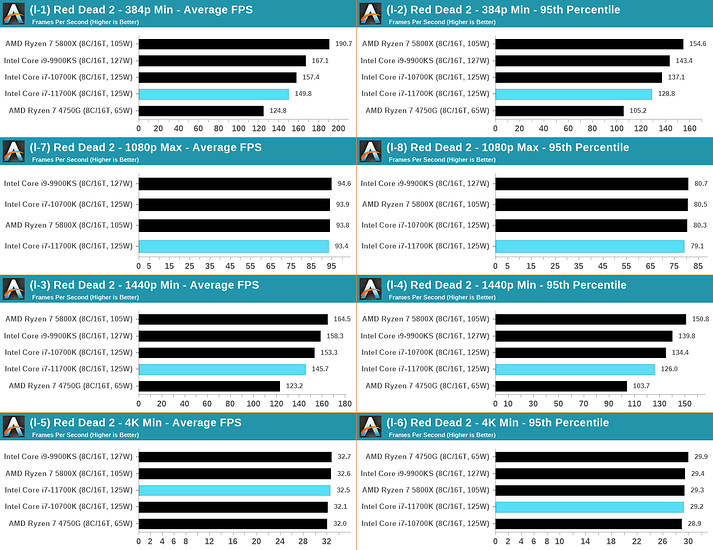 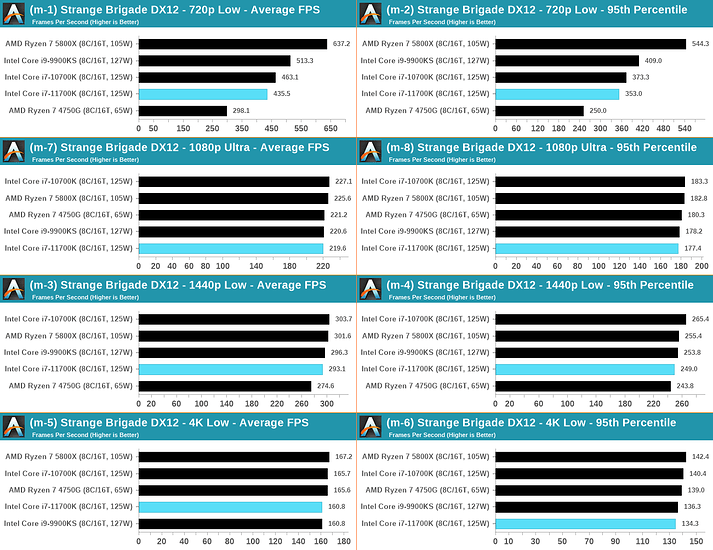 Our results clearly show that Intel’s performance, while substantial, still trails its main competitor, AMD. In a core-for-core comparison, Intel is slightly slower and a lot more inefficient. The smart money would be to get the AMD processor.

The smart money would be to get the AMD processor.

I don’t think anyone would know the difference in a blind test and that’s the beauty of modern tech: is good enough to the point that you’re almost never buying something BAD. Maybe you’re not getting the best performance per dollar, but it’s not that big of a deal in my opinion.

No it is not bad and you are right in terms of an isolated test of something happening on a PC they will all feel the same.

I think now we are moving into the world of the experience outside the PC. This 11700K is very power hungry at certain tasks, this will lead to your cooling working harder and making more noise, potentially limiting the life span of an AIO, increased cleanining of custom loops or needing larger air coolers (or larger rads in the other two). That’s an impact on real life. They will haso produce more heat for the given task compared to the AMD part, making the space the PC is in less comfortable to be in.

The feel of the two will be the same but you may end up changing how you use the Intel part to avoid the real world impact which in turn will impact the feel of the system, or trading that off for spending more money and effort designing a space that will be suitable for the processor just to retain the same performance feel as the AMD part.

I didn’t think of it that way and I appreciated you pointing that out. They’re all very valid points!

Well I’ve been around P4s, straight up heat monsters eating watts like nothing and I don’t think I’ve ever held back on how I used it hahaha Luckly it’s not an FX9590 situation in which you almost had to not use the CPU to it’s limits to avoid frying motherboards.

It’s also fair to assume that this CPU won’t work well enough in an SFF system. In my experience so far a 3700x is cutting it close going air cooling so no chanche for a CPU that consumes double the amount of watts.

It is something that is occurring to me more and more, the jump from FX6100 to 3700X was huge but the actual noticeable gain (other than CPU limited games) wasn’t all that great. I am not a power user so it is not a great comparison and gaming is the main thing I use the PC for, and it definitely was a huge change, literally doubling the FPS in GTA V on the same GPU.

But it is that GPU that is making itself known when it gets hot. In a comfortably warm house, it makes the room excessively hot. While a new GPU will likely have the same thing happen depending on the game the excess processing power it has available might mean it works a little less hard, just speculation. It is something I am thinking about more now.

Yes. I’m not pushing my 2070S to lower temps noise and it’s consuming less power so it’s a fair assumption to make.

I’m more of a colder house type of person so it’s doesen’t really bother me if a system is kinda hot running. But I remember the R9 285 heating up my small-ish room by a couple °C when I was gaming for 2-3 hours continuously (can’t really pause MMOs to open a window lol).

If you could even get your hands on a Maxwell GPU you’re gonna feel the difference in room temperature while gaming. Or just get a riser card and put your GPU out of the window for now.

right now.
I don’t think it’s that bad of a CPU

Massively disagree.
It’s drawing double the 5800X power, it’s hitting 100C and it’s still Lagging behind in performance. It is a bad CPU. The only universe in which it’s not that bad of a CPU will be if it is cheaper than 5800X, and this being Intel, I don’t see it happening. On top of that the AM4 500 chipsets platform is more affordable and better feature packed for the price.

Luckly it’s not an FX9590 situation

Do not kid yourselves, it is a bad CPU. The only thing that can save it is price.
Why was FX 8350 not that bad? Because it was priced on the i3 levels. 11700K is priced the same as 5800X and is worse in every aspect possible.

Don’t get me wrong, I would love for intel to do something and force AMD to drop prices, so I can replace my Ryzen 1700X, but 300W 100+C trailing performance isn’t it.
Maybe in September when the 12th gen comes out things will be different.

… Guessing the steadier availability factor, can make it a seller

Under AVX-512 which, if you ask me, it’s just instruction bloatware. From what I know no Intel consumer CPU can do AVX-512 without becoming a supernova.

Yeah, if it was cheaper it would attract more buyers for sure being close to the 5800x performance wise.

Yes […] while the FX was the top end of the bunch for AMD at the time.

I did’t mean to compare those CPUs between their position in the market, but more on the heat/power consumption “issues”.

Absolutely. Intel is on the back foot, but I felt like not being too negative about it.

AM4 500 chipsets platform is more affordable and better feature packed for the price.

But less reliable too. Not by much, but I’ve encountered some weirdness with USB devices on X570 that never appeared on other Intel systems. I already notified AMD about it through the link on their subreddit. I would’ve liked not to waste months with Logitech for an issue which didn’t belong to their product lol

Thanks for having add to the conversation, I appreciate it.

I did’t mean to compare those CPUs between their position in the market, but more on the heat/power consumption “issues”.

but I felt like not being too negative about it.

Yeah, maybe we shouldn’t be too negative, but on the other hand now is the time to be negative.

I’ve encountered some weirdness with USB devices on X570

What is most sad to me of all is how much time and resources intel wasted. Their technological, architecture and everything else advantage was absolutely wasted… Maybe I’m more negative cause of the multiple sources before release talking about the advantages 11th gen will have over 10-th gen and at the end there is nothing. They are about the same performance. Utter disappointment.

What is most sad to me of all is how much time and resources intel wasted.

Well they’re profitable and investors are happy. What users get for it doesen’t really matter until everyone that works there get paid, especially all the people in charge of the company I should say. That’s how things will always be.

They are about the same performance. Utter disappointment.

They tried to sell what they had the best they could and they misrepresented the product to make it look better. This is what us consumers can do about Intel: show with buying choices that their marketing tactics.
I agree on the fact that it’s a disappointing CPU if someone was expecting a jump.

After reading briefly on new Rocket Lake info. I have one question.

Isn’t the i9 supposed to be an upper tier part with 2 more cores?!

Based on my knowledge and what i’ve seen Intel doing, their lithography tends to be closer to AMDs lower die size equivalent. So perhaps 10nm with Alder Lake will see a significant jump? Supposedly the most significant CPU in 14 years?

Either it will truly be impressive. Or they will try and hide the still disappointing and obsolete performance in IPC and thermals with their new hybrid setup. Likely branding it similarly to Hyperthreading. Which we now know to simply be Simultaneous Multi-Threading.

I’m on a quad core single thread i5 still. And I was thinking Sapphire Rapids would be their saving grace. Then I learn it’s a server CPU. Then 10nm is delayed. And with that, single-digit CPUs. Oh, boy. My gut tells me with the new UV Light lithography, Meteor Lake will actually be the CPU to wait for. I don’t know.

Maybe Alder Lake will deliver? Keeping multi-threading behind a huge pay wall was a FUCKED UP move by Intel. And now they do this?! i7 and i9. Same amount of cores? WHAT THE FUCK DID I JUST SEE?! 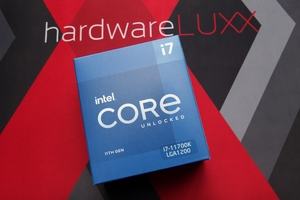 EDIT: OH YEAH. And I almost forgot. This is a BLATANT Texas Switch to an ENTIRE PRODUCT LINE. Nevermind BRANDING. For such a massive corporation to do that is absolutely mind-blowing. i9 = No Difference

Am I awake? Or is this a fucking nightmare?

Seriously, this is just insanity. I don’t know HOW the people of importance at Intel aren’t profusely sweating right now. I don’t know how you can make this blatant move. And come Alder Lake, what? Are we going to put the 12th gen i9 back in its pla-err… GIVE it 2 more extra cores?!

As if things weren’t bad enough with the locked-off Multi-threading from 9th gen, or whatever time it was. I can’t put more emphasis on this point; that’s a blatant display of bad company culture. In a time when they should be doing their best to deliver a better product, they lock an important feature behind a premium price. That, combined with their complacency in moving forward with a smaller node says everything about their company culture.

because all intel have left now is market segmentation, they have always been super aggressive about it down to tiny features which usually meant there was no one item anywhere in any line up that did everything forcing you to always have to look at everything they had if you needed one of these specific features, that way you see all they have to offer, but it has never really worked as far as I am concerned as people will just land on one recommendation and that will be the majority of what is bought.

This is just that on a really stupid level, ultimately with a cooler of any worth both the i7 and i9 will be almost identical. I would say that will result in low i9sales but in reality they will probably aim for as many of the chips possible to go into the i9 as they know right now, people just want parts, no matter what they are, no matter what the price, so they will likely limit the i7 and just use it as a headline grabber that is not actually attainable one they officially release.