Which is better for gaming and school? Im building a pc and can decide between the two of them.

in terms of raw fps the aren't really going to make a huge difference. The i5 will probably beat the FX6300 by a little bit in most tests, but the FX6300 is SO much cheaper. Go with the FX6300. If money is no object and you want the premium intel chip then go for it, but then again if money were no object you be asking about higher level CPU's.

I am getting the FX-6300 for my next build which will be very soon. So thank you for making this thread, I was wondering how good it goes up against the newer Intel CPU's

Generally Intel beats AMD. I would go for the Intel model as far as you aren't on a budget. Me personal, I'm going for the FX 6200 some gaming and especially Adobe-Softwares, as I am on a budget.

No, I mean the 6200 Black Edition in this case. There is a slight difference between the 6300 and the 6200 but I just wanted to mention, that If someones on a budget, he should try out amd

Also, if you haven't gotten it yet, consider the few bucks more you could spend on the 6300, which boasts considerable improvements over the 6200, while still consuming less power( allowing for more overclocks). I even checked pcpartpicker, and the lowest listed 6200 is $10 more than the lowest listed 6300

The box even lists them as "Black Edition". 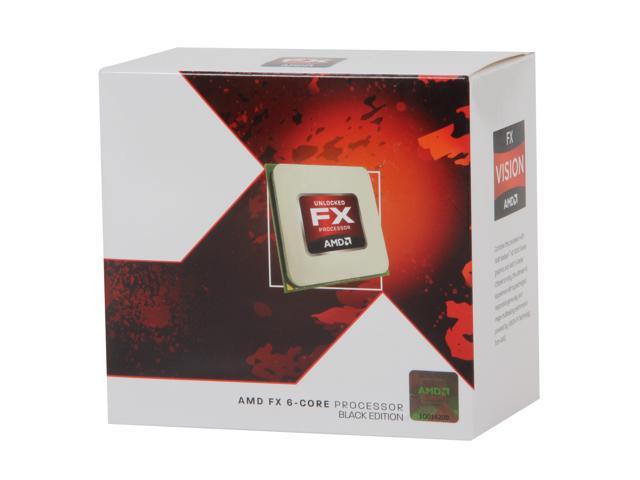 Here is a video from Newegg and AMD discussing the new FX 6300 Vishera series of chips. It starts out at 3.5Hz and can comfortably go up to 4.1 Hz I just built a system with the FX 6300 on a Gigabyte GA-990FX-UD3 motherboard. I used the RAM Loan suggested which was the G Skill Ripjaw X series (2X8) DDR3 1333. This is an excellent, stable system with the CPU costing only $139.00 and the board was $154.00. For that price I honestly don’t think you can go wrong.

3570k.  Depending on where you live they can actually be cheaper than a descent FX build.

One module= two cores sharing the same resources. So it is a hexa core. Not really necessary for gaming, but it's only around $10 more than a quad core 4300, so it has more bang for your buck.

If you need a monitor, OS, keyboard, mouse, and speakers as well, then you're better off getting the FX6300 and spending more on the video card.

If you get any new FX processors make sure your motherboard has out of box support for them. Version 2 boards from ASUS and MSI are the only ones I know of so far that support the new cpu's

How can motherboards support Am3+ but not support the new CPUs?