They realistically will never do that Debian has its way in Red hat has its way.

In a lot of ways Debian and Ubuntu are the special snowflakes. But they are the big globby ones you can’t ignore

without relearning a few things here and there because someone had the bright idea of having a completely different philosophy in user experience.

Then use what you want? All I’m saying is that pedigreeism in choosing one because we think one is better than the other is false

You weigh the pros and cons of what the distro has. Does it suit the purpose you wanted to It’s not going to be better

Almost all posix tools you’ll use function exactly the same way. And a newer kernel functions pretty much the same way.

your terminal is going to function pretty much the same way we’re talking about file paths here.

And it’s frustrating I know I bitched about it too but it’s just like we got to look it up and then we are okay. Fedora in particular threw me off again but I actually started to like its organization’s game with nginx

As @Novasty pointed out I do run arch and Manjaro arm.

Manjaro was the closest I ever got to dabbling with Arch-family stuff, on my quest to find the perfect (for me) Linux desktop distro I made a quick detour with Manj ~17 maybe, but my preference remains to stick within Deb family stuff, although I don’t love the pure Debian desktop experience, especially if you have modern hardware. But it’s rock-solid, almost boringly stable. Great for set it and forget it appliances I tend to build and tinker with.

Testing complete. No issues to report.

Optimizations have worked and are very nice

Memory usage increased 15% but its well within limitations

Additionally you can change all the servers of your pihole if you want to remove the bigger names and just want to use them. 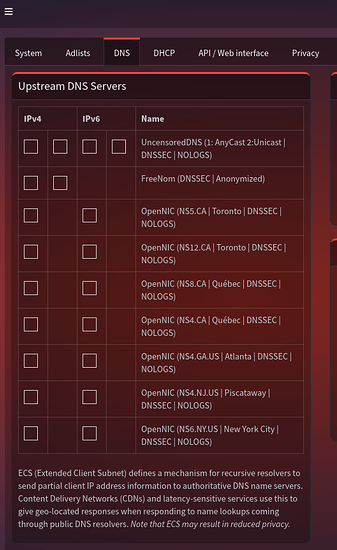 To do so you edit the dns-servers.conf

In my case I want to leave opennic as a fallback. Preserved the accent mark in Québec

boringly stable is a meme to me. I like rolling it simplifies my life haha

you need to add this to your stream{} block configurations

@PhaseLockedLoop still love you for this series. I’ve been reading through and looking things up as needed for my own understanding. Thank you for these again.

why not just add it to the beginning of the block and not have to add it to each config?

It tells me it doesn’t belong there

No problem. I expand notes as I find little tweaks lol

I do go further than others about hardening though

That’s why I’m enjoying it so much… looking into a firewall pc atm.

Any basic system will do that’s post sandy bridge.

You just have to decide are you going to put multiple NICs in there or do a trunk? Lol

OK, I’m in over my head… I guess I need to start with Nginx? lol

yes… where are you lost. 1 step at a time

Where should I try to have Nginx? Or should I start with the firewall first? Lol ug…boo… Im just too disorganized. I need to get sorted…

Do you have pihole running?

Yes on my home machine. Not all systems use it as a DNS because wife would freak but my machines use it. Its not on any testing equipment. Its on a LXC container in the ryzen 2700 Fractal 804 Server.

Yes on my home machine. Not all systems use it as a DNS because wife would freak but my machines use it. 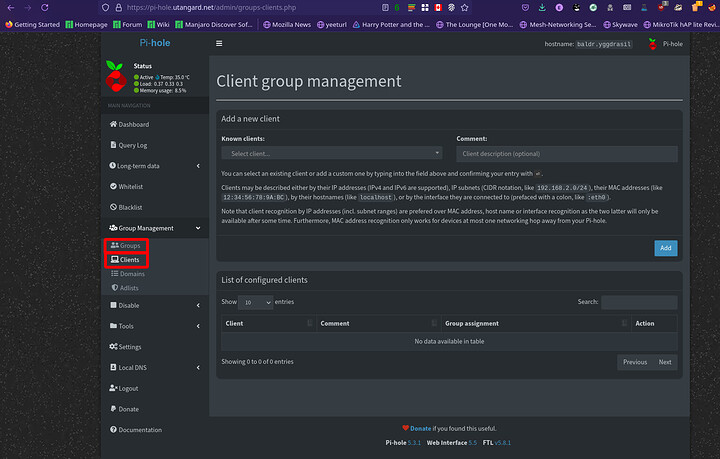 Assign static IPs both 6 and 4 to your home clients

(I dont use the function but I hear its powerful)