i need to make a dicision. what the heck is going on. in the past few weeks i've read everything written on i5-4670K and FX-8350, i mean "everything".

i even made a post here in teksyndicate i wanted the 8350 and everything seemed clear to me... then 4670K prices went down and it's HELL on earth again LOL

so i can't make a dicision.

both builds cost the same (in israel)... intel's build costs around 10$ more only

i have the "deepcool ice blade pro" cooler and i have no intention on buying another.

i'm worried that with the 8350 i won't be able to overclock it and keep it cool with the cooler mentioned above.

with the 4670K I think it will run much cooler and overclock better. I'm not sure though.

the 3rd generation is NOT an option for me.

check out the pic included to have an idea about the two builds i'm considering here.

help me out. on August 18 there will be no turning back, i don't want to get back home holding the wrong cpu in my hands. if the FX-8350 run too hot i might get a heart attack LOLOL 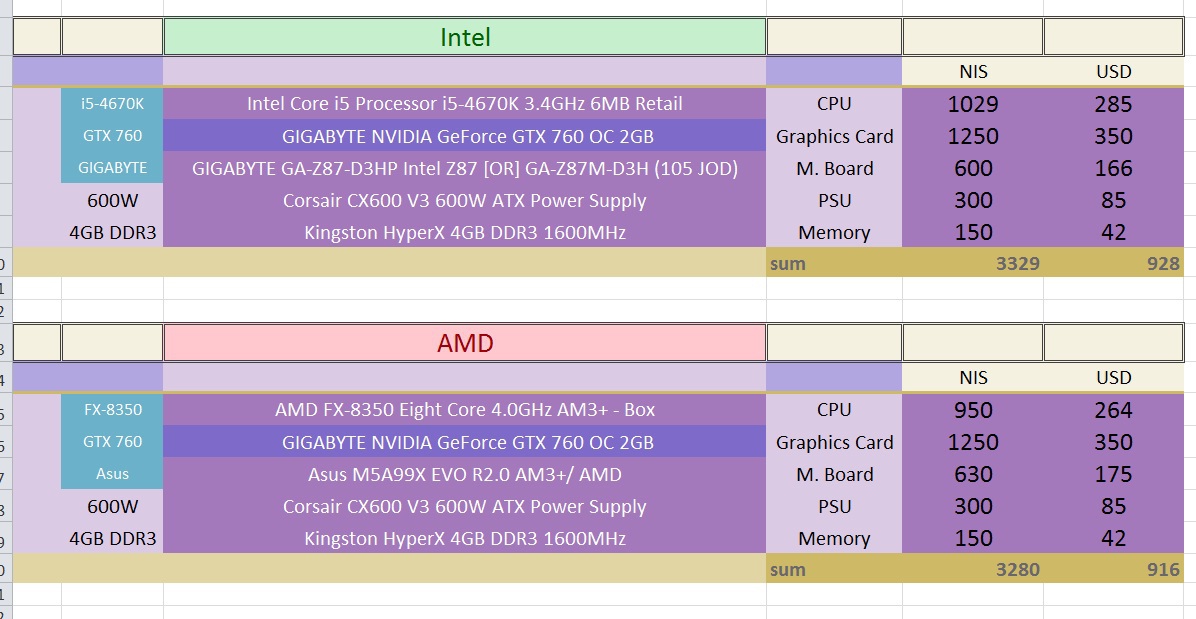 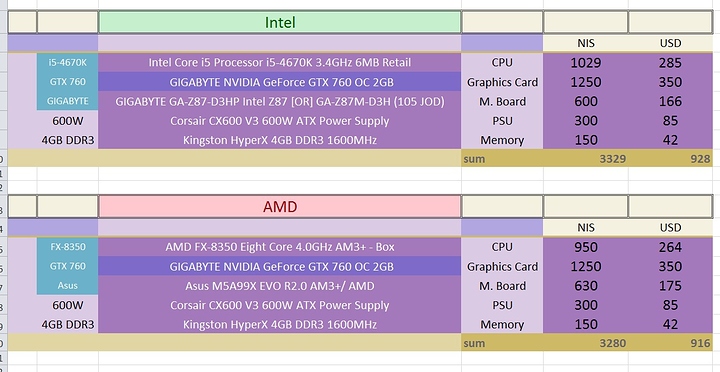 What if I told you, Haswell runs hotter than FX CPU's..

You could also go with a Ivybridge CPU if you're overclocking considering there's almost no difference in performance and it's slightly cheaper again.

"What if I told you, Haswell runs hotter than FX CPU's.." I would be confused even more.

I believe so, yes. However I am not the expert. Just going off of what I have read.

I can assure you that my 4670k runs hotter across the board. It idles at a higher temp and reaches higher temps while gaming and stress testing. That said, Haswell is a very capable platform with the Z87 chipset.

Ultimately, if prices are equivalent where you live, I'd probably go with the haswell chip series mainly because of the Z87 motherboards. However, If I was to just build a gaming rig, I'd get the 8350 hands down.

when I'm at the pc-shop (or whatever it's called) I'll just grab whatever CPU+M.board combination is in stock.

Good point. I'd assume it's not so much the amount of energy though, I think it's more how efficiently the heat can be transfered away. The Intel also uses a smaller manufacturing process so it would be more dense - this probably accounts for some of it.

So how did it turn out? head or tails

not yet lol not until i'm at the pc-shop. heads will be for amd and tails for intel. and i'm serious because each system has its advantages and downsides, and either build is good in a way.

i'll do some benchmarks next week and post them in the forum for anyone who's having the same struggle i had to go through.

1280x1024? Haha dude your hardware is wasted on that resolution. I can max out 2560x1440 with the comparable 670 as long as i don't use much AA (which doesn't matter as much at higher pixel densities anyway)

4670k, better IPC performance and way less power consumption. OC to OC it will perform better than 8350 on gaming and editing.

yeah i know ! getting a new monitor in a couple of weeks now.

My 4770 can reach 86 degrees in full load while rendering a video and watching a flash video. It maxed out at 101 in prime95 in place ftts, but that's a synthetic benchmark known to not work well with newer processors. It's around 60-70 in games with the stock cooler and fans on silent, and idles at 30 (used to be 35 in hotter days). I also have a hd 4870 which distributes a lot of heat in the case (stock settings make it idle at 60).

8350 is cheaper for gaming and you can still overclock enough to make a difference (although I don't get you people who plan to OC the top of the line products when the whole scope of OCing was to get away with something cheaper while having the performance of a more expensive part). Some games actually preffer the fx8350, as is with encoding. I'm not sure about video editing, I'm pretty sure there's a few 3d editing programs (maya is one of them)  that preffer physical cores, although I'm a novice and it doesn't make a difference yet.

I can tell from my experience that you can't go wrong with either, except that you might feel a sting when multithreaded programs will favor more cores vs. "just" a quad core. Keep this in mind.

Before you jump to any conclusions:

Yes I did apply thermal paste (AS5) properly. The stock cooler is just too weak to cool it properly, and they get away with this because it's stable at high temperatures, just like Pentium 4 Prescott.

I am sure even the older LGA775 bigger cooler (same build, but much bigger and with a copper core) would give at least 5-10 deg. off. Intel have become the mcdonalds of cpus, and I just bit their slimy fatass nutrient devoid and locked multiplier bigmac >:{D . And I am very happy with my choice 'cause i don't OC (except that if this older cooler won't cut it it will force me to waste money on a cooler).