at this point all I have is the main components blocked out, it will need some more height or length for the power cables to get around the motherboard but other then that everything is placed pretty much where it should be (I think).

any thoughts or feedback welcome…

aaaand I cant post a link to onshape. so heres a still… 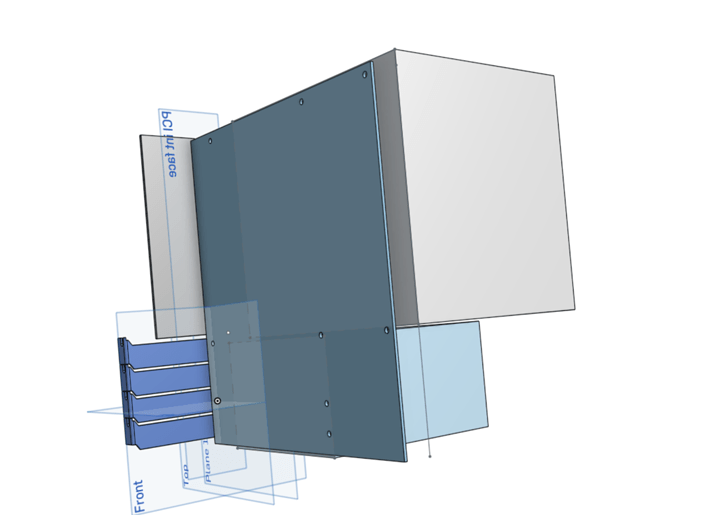 aaaand I cant post a link to onshape. so heres a still…

Sign in to Onshape, the #1 fastest growing CAD system in the world with over 2 million users.

Onshape is amazing for free non private designs… Super easy to use. Great job on you for using that service

Sketched out some basic shapes with 3 different basic themes, these are of course very rough ideas, but slightly more interesting than the basic box…

Bi-Lobe -
pros - its the one I most like the shape of…
cons - difficult shape to construct unless its mostly printed, which would take a very large format printer, access / build would be a bitch

One potential problem with the general layout is fans, front to back airflow on the motherboard side would restrict fans to 80mm, the other approach would be a larger fan on the side with exhaust front and back via positive pressure, does anyone know if there are reasonably quiet 80mm fans out there?? it’s been a while since I used anything smaller than a 120mm…

btw for people not familiar with onshape, the link above always links to the latest version of the model…

As I’m not a professional it’s plenty powerful for me, and being browser based means I don’t have to use the windows VM with its crappy video card

I actually find it easier than Fusion 360, although that may just be familiarity.

I have been thinking about a custom PC case for a while for something like a NAS, since I have a bunch of left over PC parts. I actually got the extra parts I needed, a motherboard and power supply, with a $200 amazon voucher I won in a snapmaker 3D printing competition (it was actually one of 20 runner up prizes, 1st prize was $5000 which was pretty insane).

My original idea was for a low cost, small-ish formfactor build with good cooling (planning on a single 200mm fan on the front), so I planned for a micro-ATX motherboard and standard ATX power supply since they tend to be the common budget form factors. ITX is nice for the compact size, there are a lot of 3D printable cases which are ITX (including modular and expandable ones) since it’s easy to fit on common 3D printers, but it is not budget friendly and often lacks PCIE expansion and other features.

Also want to make it modular or parametric to some degree so it can be used for different purposes. 5.25 bays are themselves modular to some extent but the idea is that certain spaces could have interchangable/extendable 3D printed modules depending on what you need it for. This seems to overlap with this project quite well since I am intending to use this as my first NAS build.

I originally intended to make it fully 3D printable in parts on a 200mm-ish cube volume printer although that is quite ambitious while also making it robust. I have some 15mm aluminium extrusion profile I was going to use for a printer frame but I think it would be ideal for a case frame, along with some transparent plastic sheet I have laying around. I think it would be good to make the side panels 3D printable as well even if that’s not the ideal process for producing 2D panels.

Dust filters are an interesting problem. In theory with a fine nozzle e.g. 0.25mm, and deliberately underextruding you could print a fine mesh with as many layers as you want. Another method would be to stretch a mesh material over a printbed and print on it directly (or halfway through a print) which is a technique used in cosplay to incorporate fabric into a part. There may also be some commercially available dust filters I don’t know.

I also originally intended for this to be a commercial project, where I sell the object/CAD files but I don’t know if there is a market for something like this. Once I have finished my MSc course in a couple of months I may start on this project.