I got a PI like thing in the mail from Webroot

So I received this board with a little monitor, usb, magnetic sensor, a battery, and a tiny speaker all soldered on. It originally was used to play some silly "Get malware protection" ad. Putting an .avi video file was easy enough, played my breaking bad test file right away. Doesn't like .mp4 files however.

Anyone recognize the board? It has got a Hynix chip and a micron chip. One is memory and one is flash. E200. That reminds me of powerpc but, that's not a thing anymore right? A lot of unused contact points run along the top of the board.

I wanted to know if it is possible to have it run as a little monitor through usb to a pc. Can't display much but, could be cool. As of right now it plugs in as a usb drive with ~ 450 mb of storage. 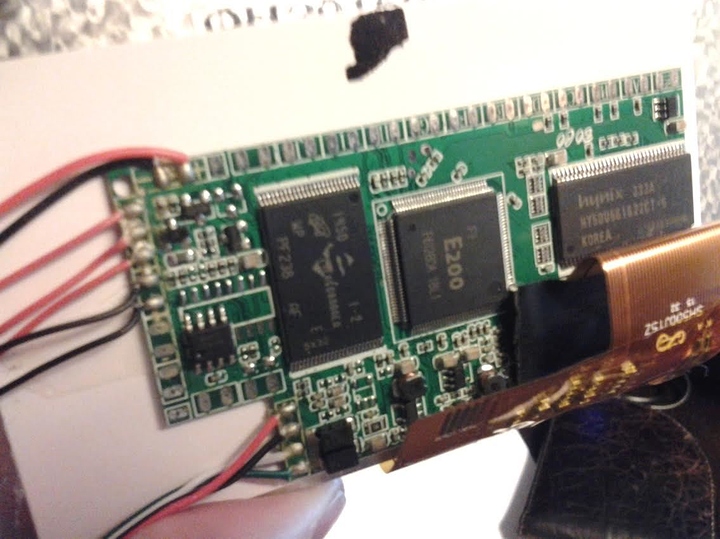 That looks cool. How or why did Webroot send you that? Looks neat.

It was a marketing thing. Had a small 15mb file that went on about phishing = bad and buy webroot stuff. I looked at the thing and saw free hardware.

Have you found the data sheet for that chip?

This is what I found. ARM cpu. Old powerpc name, but this looks to be an arm.

I also found a french guy who has a similar board. Same chip, but different layout. Same lcd. He had trouble getting the thing to hook up through serial. Looking at what he did I will have to set up one of my pc's with gentoo to see if I can make any progress. If only my laptop that I always had running that didn't fail. I could jump right into it then.

Cool! Hope it works out! If you have a RPi laying around you could use the serial interface on the GPIO.

That would be a nice way of doing things, however I do not know the pinout for this board. I have a usb. So I need to either write drivers or hand things over to linux. If I knew the pinout that would make things easier. There is near no documentation on this board sadly.

Some links that could be useful: