Before people suggest to move to another host OS, I have some software that only works on Windows plus I need to be able to use the LCD screen to output some stuff, so ESXI is out of the question also.

What I want to do is get rid of the second physical box that is running backup NAS and just move its hard drive to the main box.

However, at the moment, my hard drives are set up in a passthrough mode to the Synology VM and since I can't some S.M.A.R.T. info inside my VM anyway, I was thinking I should migrate from passthrough setup to a virtual disk instead. (for snapshots etc)

Now here is the question: what would you recommend for redundancy of my hard drives on the host(windows server) level where I will store my virtual disks? Should I just keep hard drives separate and store individual virtual image on each one. Or should I do some sort of redundancy and store virtual disks there. I would prefer to just have one big disk that combines all of the physical storage I have and just keep my virtual images there, but I don't want to lose my data if one of the disks dies.

My storage. First 512 is SSD that hosts the system itself. 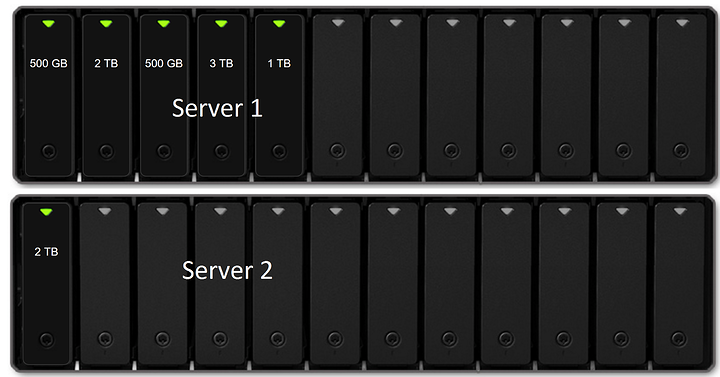 Define what type of redundancy you're wanting clarification on?

Typically I would just have a storage pool on the NAS and host the VMs there but last I checked synology didn't support that. Additionally it doesn't make much sense to host your vm storage on the same supervisor as the other VMs. Hope I read that right.