How's this for a Cheap Linux Build. Should I make it cheaper? 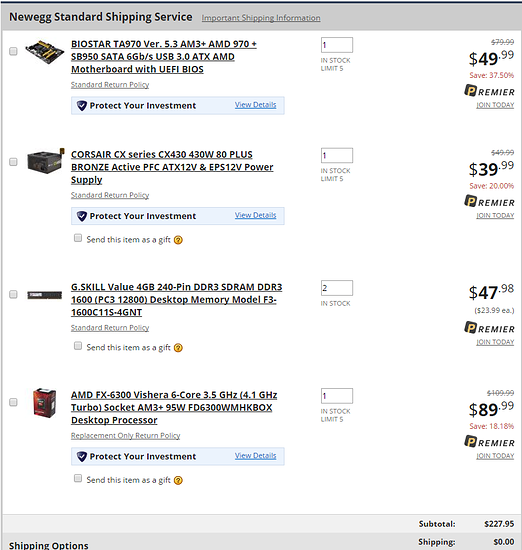 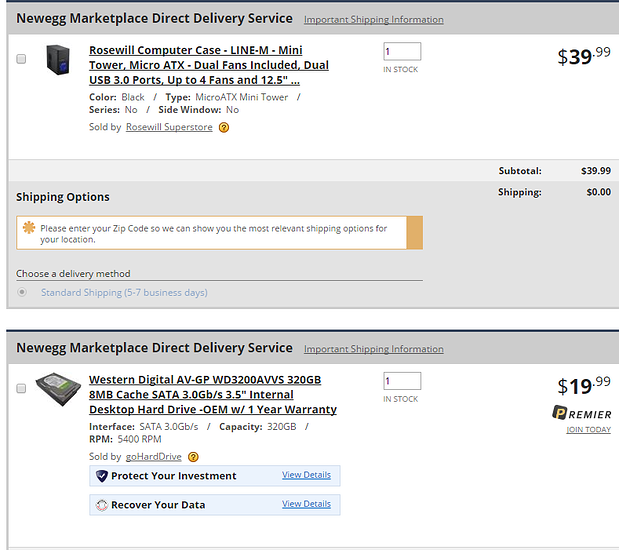 Pasted image789x701 57.5 KB
Looking to make a cheap build might give it to my little cousin as a first computer don't know yet also he's 12 and hates Windows 10 so I guess he got that going for him. I excluded the fans cause I already have lots.

For that Mobo take 8GB stick if so I would go that route.

AM3+ has no built in video out, so you will need a video card with that cpu. I would go for a a8 7600 unless he wants to game. And I would not trust an hdd that cheap. I would suggest going with a cheap ssd. You could also go with an In win Chopin if you get a mini ITX mobo. It is really compact and has a built in psu. But that would severely limit upgrades. Really depends on what you plan on accomplishing.

In the vein of what I was saying, I like this build a lot and would recommend it, if it fits the needs. 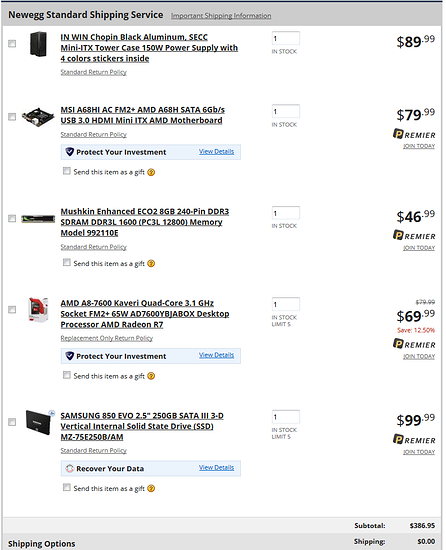 Naw not really he needs it just for doing school work and browsing the internet.

In the vein of what I was saying, I like this build a lot and would recommend it, if it fits the needs. 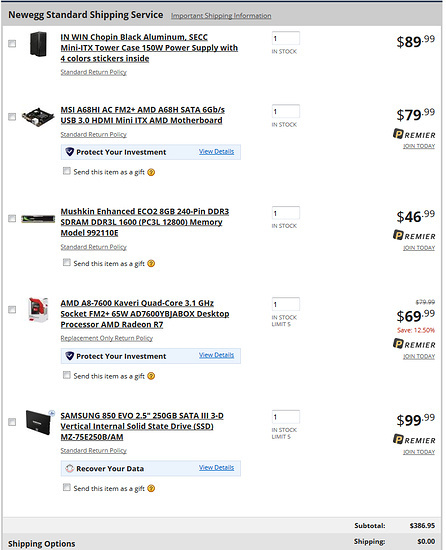 I might swap out that ssd for a WD Black 1TB, I don't know how much gaming he'd do since he has like a ton ps3/ps4/xbone games that he always playing.

If you have a microcenter nearby check out thier FM2+ and AM3+ combos.
http://www.phoronix.com/scan.php?page=article&item=intel-pentium-g4400&num=1

Phoronix is a GREAT Linux hardware review site. With the Pentium 4400 you can atleast go with DDR4. The AM4 APU's would be better IMHO but I have yet to see them available for the desktop.

I have one of the first MSI A68h based MB's. 80 bucks is insane and I would go with Gigabyte. Mine came free with my 7850k.
Hope this helps

I picked that mobo because it is 1: mini ITX and 2: has wifi already. You can find slightly cheaper ones, but that is a decent price.

As for the hdd thing, just make sure that you get a 2.5" drive because I don't think that that case supports 3.5" drives. I doubt that he will need much in the way of storage space though.

EDIT: You can go with an sshdd for the speed benefits and the storage. Or you can get a decent sized ssd and a separate storage hdd.

I am about to be gone for the day, so I will add this really quickly before I have to leave. The a8 7600 is a favorite of mine. I've built a few machines around it. One of which was for a graphic designer. Huge photoshop files, multi tasking, etc. It handles it like a dream. It is reasonably priced. It has a good iGPU for light gaming (should he want to mess around with xonotic or TF2 or something). It is just a good all-around chip for a really solid price. Not to say that you won't get what you are wanting with something else, just that this one definitely has its pros, and is my go-to for budget builds that aren't geared solely towards gaming.

Why not build something around the AsRock Deskmini 110? It's pretty cheap and you just need to add some RAM, a CPU and an HDD. Maybe you'll be going a bit over budget (around 300$ from what I picked up looking at all the builds in the thread) but you'll be getting a better overall solution, in my opinion.

If you want to go cheaper, you could probably lowball someone on Craigslist. There is a shit ton of stock post xmas.

Do you live near a Microcenter? They have a combo deal on some AMD processors... $40 off with motherboard purchase.

Have, I not taught you ? Dual channel amd always :)

He will have a chance to do that latter give him more of an upgrade path.

For a cheap linux amd office build 6300 is not bad even if it is a dead end. Really should just consider building the cheapest modern intel or wait for Zen if a upgrade path is needed.

Why does it seem like everyone has such a hard on for these drives? They're overpriced plain and simple... if you want reliability you don't have to shell out near that much, for example: 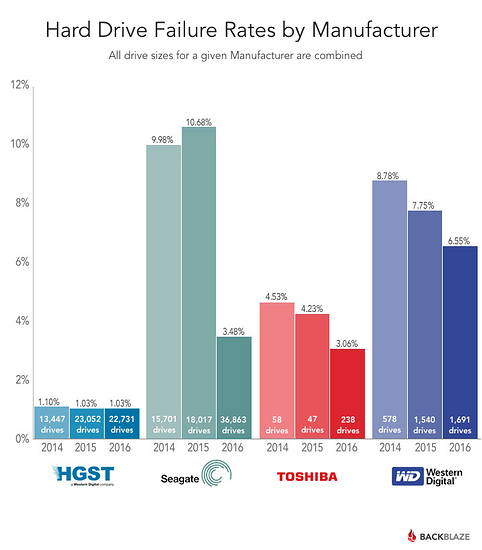 As you can see clearly HGST (Hitachi) has the best drive failure rate by far. According to pcpartpicker (yes I know... not the best place to do price comparisons but it's quick, easy, and usually pretty accurate) the cheapest 1tb black is 69usd, whereas, a 1tb Hitachi ultrastar is a touch over 45usd. $24 dollars saved to throw elsewhere, of course you could go cheaper with smaller capacities.

Alternatively, you could salvage an old pc for linux, if it's just schoolwork, watching videos, other internet stuff, etc. A toaster would be good enough.