How do i clone raid 0 drives

So after dropping $900 this weekend, i now have some new stuff, in particular new drives. A screen shot of my setup here -> 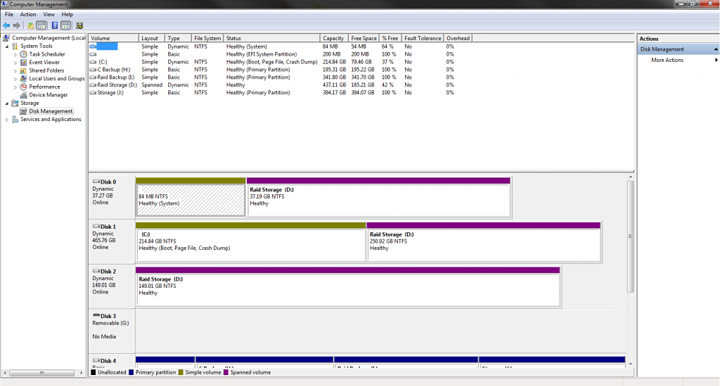 So based on what you just saw, I have two main partitions, "Raid Storage" And C:\

So i need some help on this problem, I want to put my C:\ on to a new SSD i bought, and then taking the Raid Storage partition, to two new 1TB drive that will be set up in raid for about 2TB of useable storage. I would prefer a direct clone if possible. Not a fan of images.

Come on guys, help me out

Well that's a cluster f*ck if i've ever seen one.

Is the drive you wish to transfer the C:\ to the same capacity as the existing partition.

Also is your RAID configured with Windows and not at the hardware level.

Why did they do that .

Even though I have no clue what you're attempting to achieve on your storage, to answer your question Raid 10 is what you are after, but you cannot do it with software that I've ever been aware of. But if you're going hardware raid might as well go with like Raid 15 or go crazy and do Raid Z.

No what im trying to achieve is cloneing the windows raid partitions, the screen shot shows how I have the drives configed, how do I clone the partitions that windows sees

Exactly, raid 10 does that, as well as 15 except with 15 it does so with the parity information as well so if two disks fails it can still rebuild the raid where as 10 it just does the data and if a drive fails you have to manually rebuild the raid.

There's no way to achieve what you are attempting to do with software (that I'm aware of) though.

Ok let me refraze this, I want to make a copu of the data on the drives

Word of the day is backup, you're wanting to backup your data. Okay, now that we've got that covered Windows OS allows you to backup your data automatically onto a DVD, USB drive, Drive or Partition. You can access it by going to control panel then systems and securities.