I'm curious. How did you get your start in table top role playing games and what are you doing currently with Table RPGs?

How I got involved with table top role playing pen and paper games is an interesting story. I was 13 years old sitting in a hallway at my church writing in the 1st draft of my 1st book book, while a loud, noisy, and boring dance was going in the gym. A 15 year young man came up to me and said, “What are you doing?”

“I can't tell you what's it about because you might steal it.”

“So there will be magic?”

“Ever hear of a game called Dungeons and Dragons?”

He pulled out a paper wrote his name number and address. Then he said, “Come on Saturday at 3:00 pm, if you want to know more.”

I decided to go. It took 4 hours to make my first character. My first Dungeon Master taught me about the sandbox method of running a campaign. That the DM creates the world and the players drive it. If the player wants to destroy a town then they can and it will have consequences. This was Advance Dungeons and Dragons at the time. This DM stayed my DM till I went off to college.

My 2nd DM was ok but he ran the modules so there wasn't as much freedom as I would have like.

I decided to run a D20 modern campaign. I ran it for one year. I started working on the 1st edition of my own pen and paper rpg at this time.

My 3rd DM was awesome. By this time 3.5 was established. He also used the Sandbox method. He also taught about the chandler effect.

DM: You're in the dinning hall. A goblin is moving towards you.

Player: I cut the rope to the chandler.

DM: You succeed. The chandler crashes down on the goblin killing it.

That's the chandler effect. Player can use their surrounds within reason and the DM goes with it. This 3rd DM asked me if I had ever run a D and D campaign before. I said no. He said for me to give it a try. I ran three campaign's for this DM. Each campaign took 6 months. We took turns. He run 6 months and then I'd run one. Then I moved.

I've retired from certain types of role playing campaign's, if they are all about kill everything and no story, I want no part. If it's focused on the role playing, and the story then I'd most likely play it. I've been a DM for 10 years. I've actually converted d20 modern to 3.5 rules. I ran a western campaign with those rules. I ran two sessions both in the same city with two different groups. What one group does the other group sees the impact. I'm working on the 5th edition of my pen and paper rpg.
Currently I'm a Dungeonmaster for Dungeons and Dragons 5.5 edition (I combined the best of 5th with 3.5, hence 5.5 edition). I created a world for all my future campaigns. The following are the maps that I have drawn for this world so far. 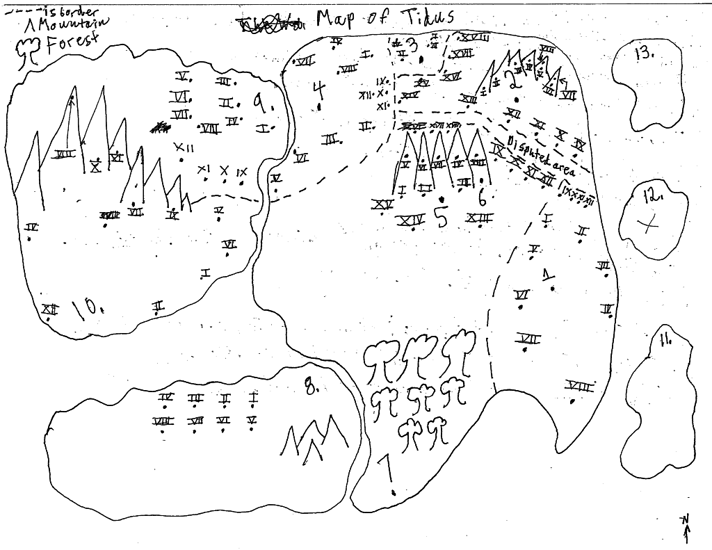 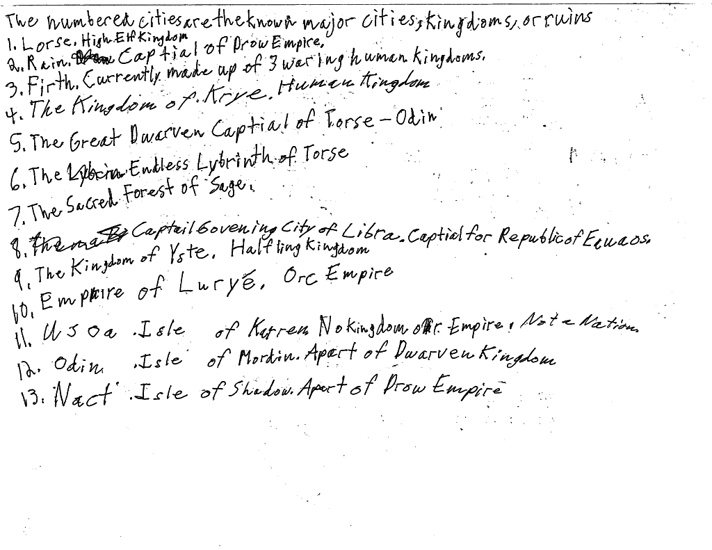 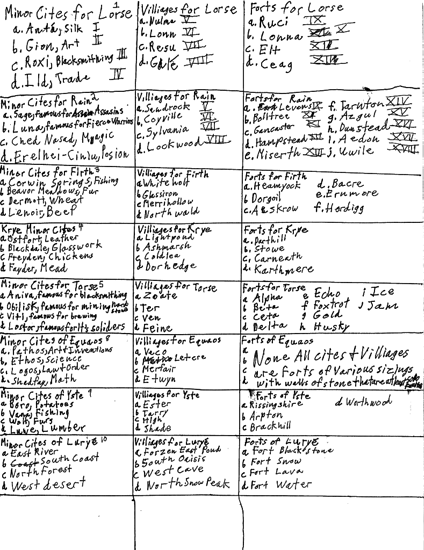 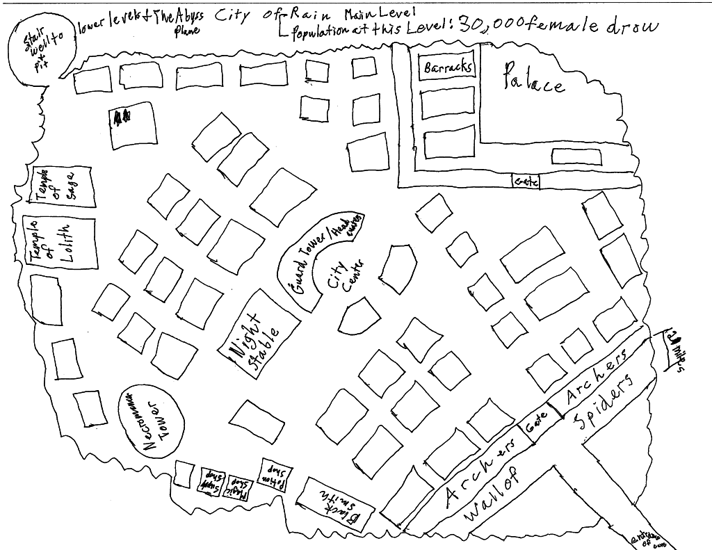 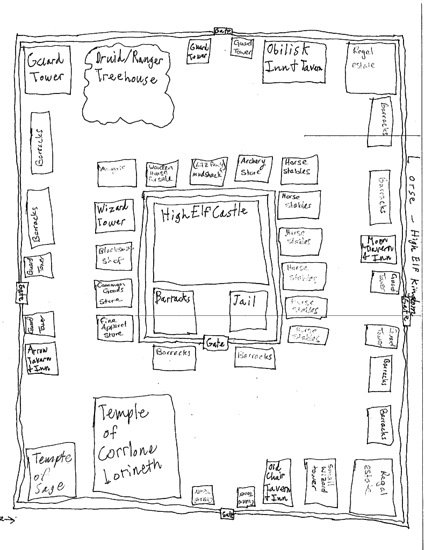 I created over 700 NPCs, named all of them, named all the cities. Created the history of the world. The campaign is the sandbox method, meaning I shape the campaign around the players and everyone of them gets a moment to shine. I run a session ever Saturday from 7:00 to 10:00 pm EST The campaign has been going for 8 months now. 4 of my players are females and one is male. The group is pretty awesome and they've done a lot: Overthrew an Evil Drow Empress, Started Peace talks between the Drow and The Elves, visited 3 planes, and they saved magic. I'm very pleased with how well they roleplay. They stay in character and don't use any meta knowledge. Everything that has happened in the campaign is because they chose to act on the world one way or another.

How did you get your start in table top role playing games?
What are you doing currently with Table RPGs?

We got started because my groups of friends and I were going through a board games phase and the next step, it seemed, was to jump into RPGs. We went to a store ask around for something that was appealing to our interest. Eclipse Phase caught our eye and, even though the store clerk warned us against it being our first, we bought.
He was right about it not being an ideal entry point to RPGs but we had a blast.

We got started because my groups of friends and I were going through a board games phase and the next step, it seemed, was to jump into RPGs.

This.
My first experience was with Hunter the Reckoning. A friend of mine, who had played it previously with his friends, took up the mantle of the GM. He was really effective at it too. I get lost in the details because we've changed games, campaigns and GMs many times over the years but if memory serves we were basically fighting the supernatural (vampires, lycans, etc, etc). Also, we got Brownie Points from the GM when we were abnormally sadistic.
One such example was in a campaign previously run by one of his friends - they needed information from (I think) a vampire. After defeating it in a team combat he took it to a nearby garage (the kind next to a house, not like a petrol station). He tied the guy to a chair, laid him flat and set up a candle underneath an oil can that was slowly dripping onto his head - the oil would drip, catch fire then land on the guy's forehead.

We next moved on to play Stargate SG-1. That was quite an entertaining game, full of shenanigans, epic consecutive natural 20s and laughs. My character even hooked up with the base's bike after failing to score a night with a named NPC.
The problem with SG-1 was the lack of rules. It's based on D&D so we started using those books for reference but ended up playing D&D after a while as something different. I enjoy modern RPGs but the combat systems leave a lot to be desired, particularly with guns. We've also tried D20 Modern (and Girls with Guns, which is one of my favourites).

The biggest problem that we've had over the years is holding onto a GM. My friend that started it all off moved to a different county to intentionally leave it all behind, including some of his best friends, so that ruled him out. I have two friends that do quite well as GMs but when either of them are the GM they end up arguing a hell of a lot (they do anyway but this is a different level). I suck at GM'ing - I have some initial ideas but the execution is useless and I don't really have the time to plan properly during a normal working week. I'm also more inclined to be a PC than the GM.
My fiancée also plays, as does another one of my friends but her execution is worse than mine and he just... just no. My fiancée's step-father is old-school so he counters one of my arguing friends' abilities to pick holes in the campaign. He's overall a really good GM but he can't commit to it at the moment, most due to health problems.
That leaves one of my arguing friends to GM and the other to sit out, though the one that's GM'ing prefers to be a PC.

It's been a number of years and really enjoyable but yeah, holding onto a decent GM is the hardest part. We all still want to do it though. Anyone fancy being a GM on a weekly basis ;)

I've mostly been fascinated with developing games into tabletop forms (though I've met no success yet; it's a skill I'm working on). It's a fun mental exercise for me.

Recently, I've decided to start game ideas in a simple system like The Window for testing it, and then gradually add things in to make it its own game. The goal is that eventually, the system gets overhauled into something unique that suits the setting and the intended feeling of the game.

My lack of success is, in part, due to lack of testing - though this might be 90% the reason nothing reaches past draft stage; maybe most devs just need droves of testers?

Here's one sample of a plan - https://untapped-warfare.obsidianportal.com/wikis/home-page

Played MTG a ways back. Bought a few different players manuals, & DM guides but never had anyone else interested in d20s. Now I and a couple of friends are trying to coordinate our adult schedules enough to put together a couple of D&D nights and get back in it.

I picked it up a few years ago with one of my friends and played a session with what limited knowledge we had on it. I still have yet to find a decent group and its quite agitating me.

i started out with my old boss from gamestop. he listened to a podcast about d&d and wanted to give it a go... i turned in to the party healer / slave. fast forward 6 months later and i started dating my wife. she has been playing d&d for years and invited me to a game. now 4 years later i'm in a 3.5 game 3 pathfinder games, and 2 star wars saga edition games. and running 2 of them myself on roll20. all and all im glad i didn't let the one bad experience spoil the whole thing.

My first time was some time ago on a scout camp. We gathered around the fire place, 6 people in total, one being the GM and already knowing the game, physics, ways to roll. As we sit there, everyone gets handed a PC. Just looking at the race and inventory, we had to say what to do.. and how. So each step, was our first. Every move had to be rolled, literally some broke their ankle at first, but we went well.
I learned that when being a dwarf, you don't use your small knife to make someone talk .. when u have a giant battle hammer on your back.

The second time it was already another universe, but I did well. Creating my own Shadowrun character, distributing on how I would love him to play.
Early that day, I met the whole group, we went to a hotel to get our new contract, meet who is telling us what to do for their money and our benefit. While being in discussion, we all get a feeling to be a little more observatory than usual. I as the only one - young experienced with no augmentations implemented - recognize a small helicopter with two big bad looking miniguns flying into my view at the window. Quick thinking as hell I shout out "MINIGUN, take shelter!!!" - and stay put. Looking like a cheese shortly after, lying on the ground like all the others, but with somewhat covered in more blood, all over my coat.

My dad played with his friends. I just always wanted to hang out with them so at 8 they would let me play till they got to drunk and stoned then I would have to leave. Later on in life I kind of became emancipated and on my own at 14. I really didnt have any friends so I would just create stories and player sheets and play by myself. The dice kind of were my laws of physics and rules that kept it... believeable. That way I just didn't let my mind run to wild and out of control. It lead to a lot of my creativity and even though I don't play anymore I always look back on all of that time with fond memories. Even if I was dirt poor, and all alone.