Higher speeds than ISP gives me?

But now I've noticed that the Blizzard Launcher shows a higher download rate than should be possible.

But my data plan says 50Mb/s up, 5Mb/s down.
So does the speedtest.

This just doesn't sound right to me. Is there something essential I'm missing?

Speedtest don't have the best servers. Try testing your connection on speedof.me to get more accurate results.

This just shows how Blizzard has quicker servers than speedtest.

Well what you are seeing is marketing at work.
Comcast for example started marketing Turbo Boost, which is really just 60mb and depending on traffic it may slow to 50 or so...
But they market it at 50mb which turbos up to 60! Wooo free speed!
It's probably too much work to throttle you to exactly 50mb, so you get more sometimes.

I have time warner and I pay for 30mbs/5mbs and I regularly pull 215mbs/22mbs when I use a VPN. I also use a Motorola surfboard for a modem and have one port going to my router that pulls the stated speeds. The other port I have running to the modem/router combo that time warner gave us and that only gets about 85mbs/15mbs without a VPN.

Screw you people and your amazing connections. :P

So long as you're getting what you're promised, I wouldn't worry about it.

Its a mis-calculation. Thats all. If it "checks" files that it already has while downloading and patching they get counted in the bytes processed without actually being downloaded. It sees Im X bytes ahead in the last 60 seconds so thats X/60 Bytes/Sec but doesnt account for some of them being pre-present.

Thanks for the insight! 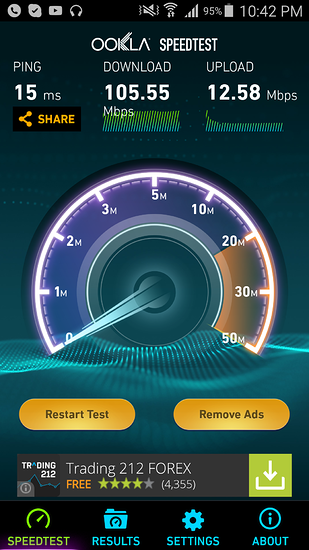 How about this hahahah I love my ISP I'm only paying for 65Mbps down and 5Mbps up.