Hey remember that juicer from the news. Here is a tear down of it

Wish the chain saw had worked.
Damn you could go to space with this thing. Thing must cost a crap ton just to machine.

Thing must cost a crap ton just to machine.

As a machinist I can tell you that they lose money on the machine, its the razor blade model but worse because of the subscription.

I got a razor handle for free in the mail on my 18th birthday. I still use that handle, which means I buy their razors.

if its made in America

When I worked at Black & Decker, my mechanical engineer friend, was having trouble with the new food processor failing prematurely in testing. He couldn't figure it out because he had designed many food processors in the past and the new one was just a 'shell-over' of the previous model he had designed.

It turned out the the new cheaper Chinese manufacturer (Windmere) was not machining an edge onto the blades of the food processor as specified. They thought using thinner sheet metal and just stamping them out like they do in China was acceptable.

I think there is a market for quality built products that arent all marketing wank, but dont know of any company that does it that way anymore.

dont know of any company that does it that way anymore.

My Dad was given a Black & Decker drill and a circular saw in the 1950's by a carpenter that bought them in the 1940's. The outside of those suckers are made of aluminum and they still work great.

When I worked with carpenters in the 1990's they told me "If you buy a Black & Decker saw, when the blade wears out just throw the whole thing away." Companies make more money if their shit is constantly breaking, regardless of the bad reputation that causes.

The golden years of companies where they didn't have to increase the profit 100% year over year.

My great granddad had a McGraw-Edison drill like this: 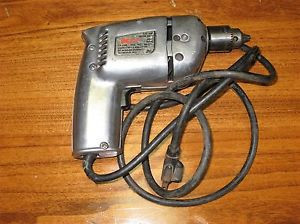 Now my grandma lives in his house, and being the grandson I get to do house work (change light fixtures, fix electrical outlets, replace doorknobs, etc) so I get to use his tools. That drill is probably 60 years older than me and it's in better shape then the 5 year old Black and Decker cordless drill we have at home. Old tools are the bomb.

You must not watch much AvE

I watch too much AvE!

I bought the skookum choocher shirt and the shop ruler. Get on my level.

You must not watch much AvE

No I don't, never heard of it.

I am just going by the engineers that worked at Black & Decker that said their own tools were shit, but DeWalt was worth buying (biased). Compared to Black & Decker, DeWalt is better, but I know there are much better tools than either of those.

Hey let's not brag about how much interweebs we watch ok.
But seriously that thing is dumb. You can tell those are made for early adopters to praise how good they are bc nothing is harderned. Any fucking idiot will take a look at that and go wow quality. Then start praising the shit out of it. Then When they do start to catch on they go right to China to make and all that machining sex goes away. A chunk of Al that big is ridiculous. I don't see why any of that stuff could be plastic. Even their actual pressing mech is over kill. Fuck you could juice a ham with that thing. It's clearly meant to be a hey look it's quality buy our shit.

I will say despite the mediocre-ness of the newer DeWalt tools, I have an old DeWalt drill (too old to be cordless but too new to be steel, it's plastic) that's bulletproof. You can tell it's pure analog cause there are no speed steps and no PWM noises. Having a cord is a pain, but I'm convinced that thing will knock a hole in just about anything. Makes me wanna buy more DeWalt tools even though the newer stuff isn't as good.

Im not saying dewalt is shit specifically. I'm mostly saying theyre all chinesium on the inside.

Yeup. Snap on or bust.

Milfuckee is getting pretty good though. Their higher end stuff is getting closer and closer to actually being good.

My father has a drill exactly like that, and holy crap is is good lol

AvE is the shit!!

I got the same one form my grandpa replaced the brushes and it's been good since. Just be sure you hold on to it right or you will be in trouble with its two speed control.