hello iv recently been trying to stream/record with OBS but its not picking up my mic at all. i'v messed around with the audio levels in windows, and the only way i can get OBS to pick up my mic is to have the levels at 100% with a 30% boost on it. the problem then is you only hear static when i talk. iv also messed with the noise gate in OBS, but nothing seems to work
I'm currently using a mod mic 4.0 and plugin it in to the back of my computer.

here are my specs if you need them.
8350 AMD eight core
ASUS saber tooth 990FX R2.0
a 770 graphics card
two ssds and a hardrive
the rest shouldn't matter

any help would be appreciated

OBS has to 'recognise' your mic, and you need to go to the 'audio' settings window, then 'desktop audio device' and there will be a drop-down box where you will be able to 'reinitialize' and 'apply' the settings for your mic.

The other trick is to re-apply a new save-as file for your local recording to be sent to, OBS can be buggy, and sometimes doing this can force the mic to reset.

I use an AKG 120 Perception USB microphone.

*Just a note: it might also pay to look at your mic technique, too. All mics have a 'sweet-spot' for detecting sound, especially 'cardioid mics', I actually speak quite close to my AKG mic to enhance the audio. 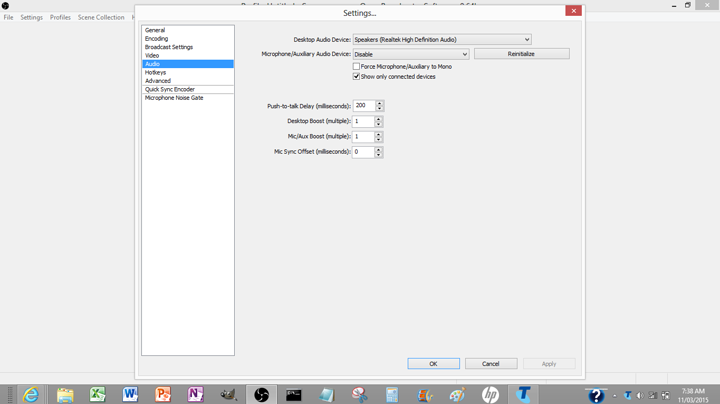 The video below is created using OBS:

Have you tried to check that the right mic is chosen?

ok so iv gotten obs to pick up my mic now i just need to figure out how to eliminate static, again messing around with the noise gate doesn't do anything if i record or steam there's permanent static thats being displayed, also i sound dissent, any thought on those issues?

Did you try using a different USB port to see if that eliminates the static?

do you think a adapter to change it to USB would help?

I'm not an expert, but the static may be related to connection problems with your mod-mic (I don't really know enough about mod-mic USB adapters)