I’ve used makemkv in the past with no issues, however, when using the same bluray drive as before but now over a usb3 adaptor, makemkv refuses to see the drive. Windows and linux versions of the software don’t seem to work in my case. Both os’s can see the contents of the drive and read from it.

The drive is a laptop pull, UJ141 by Panasonic, hooked up with a usb 3 to slimline sata adapter. 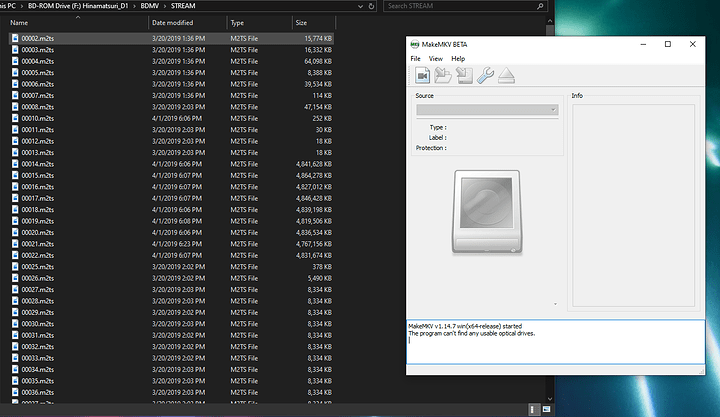 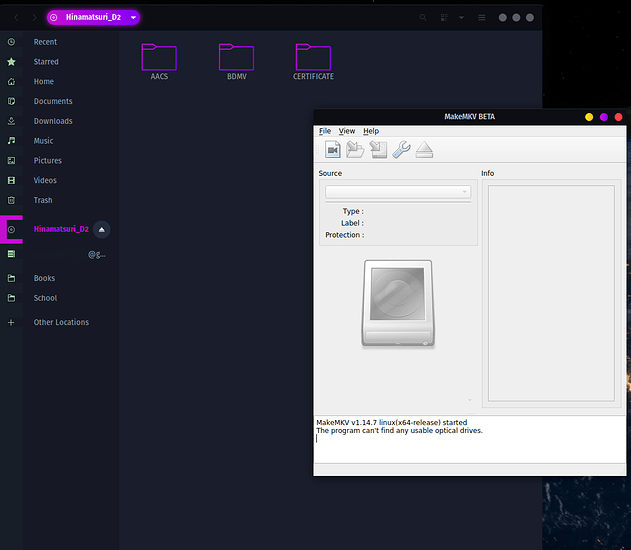 Is the MakeMKV software running with a user/permissions that allow it to see the drive? I don’t know how you are getting access to it, though I’m assuming it’s some sort of automounter. This may be a classic case of “udev rules are needed for this”. That’s just a quick thought based on similar experiences I’ve had with devices.

Yea I’ve launched it as administrator in windows, unsure about linux.

I’ve dug through that forum already, but thanks for the link.

Here’s my post there asking for help if your curious.

If the drive can be seen and CDs (or Blu-rays) can be read by the OS, the adapter is providing enough power. So that’s not the problem.

I suspect that the adapter makes the Blu-ray reader not identify as such, which may not be a problem for Windows but still causes MakeMKV to not find it. It probably thinks the Blu-ray reader is a USB stick, not an optical drive. As such, MakeMKV doesn’t look at the contents of the drive.

I just grabbed an old 2.5" Toshiba HDD and hooked it up to my Icybox SATA->USB adapter (IB-AC6031-U3). Win7 recognizes the drive as an “ASMT 2105 USB device”, not as a Toshiba HDD. I suspect you’ll find something similar if you start looking in Device Manager or the Linux equivalent.

I suspect that the adapter makes the Blu-ray reader not identify as such, which may not be a problem for Windows but still causes MakeMKV to not find it.

x2 for this… I believe makemkv uses some lower level voodoo that might be lost in translation over a USB <> SATA bridge.

I have had the same problem. BluRay drive ripped disks just fine laying naked on top of my case, with a long SATA and power cable running inside. But, buy it an expensive USB 3 enclosure and is it happy? No, doesn’t work to rip discs at all. Makemkv sees it, but the rips won’t start, or start and quickly fail.

You guys are right, that would be it. You guys/gals really are a resourceful group. 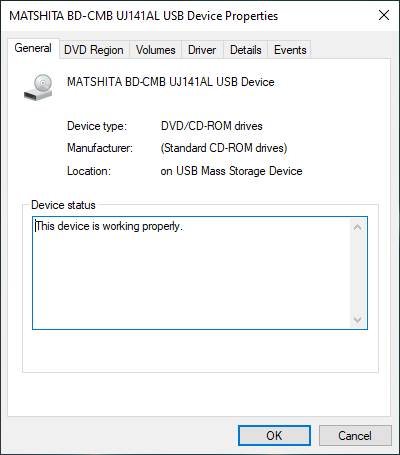 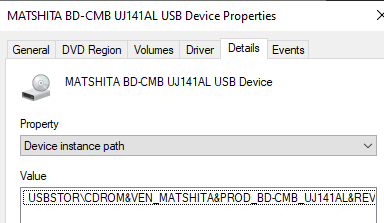 Now… heh, is it possible to change the location of it?

edit:
In control panel it shows up as Ext. HDD with the same drive letter. 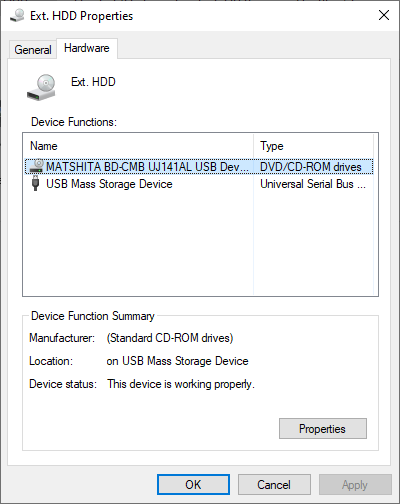 Now… heh, is it possible to change the location of it?

I’ll reiterate to look at the quote below. Modern disks don’t like being ripped, and makemkv may leverage parts of the drive that only raw access provide.

believe makemkv uses some lower level voodoo that might be lost in translation over a USB <> SATA bridge.

I’m likely to believe this because according to this thread you can’t use makemkv on an iso because it needs more information, which clearly it has to get from the drive, that USB won’t let it have for reasons https://www.makemkv.com/forum/viewtopic.php?t=16732