Hi good peeps. A long shot but maybe someone can help.

I've been having an issue with "disc 0 has been surprised removed" for almost 2 months now. I've tried to the hilt to resolve this issue but to no avail. Mostly its recurring almost to the second on the hour every time. I've tried looking into tasks ect... and everything else within my knowledge but to no avail. Driving me nuts pretty much now.

I have a screen shot of the event viewer but not clear how to post that here.

Any feedback much appreciated.

Screen shot would be nice, just get printscreen or gyazo they are free and require low resources

Have screen shot just how to upload here? 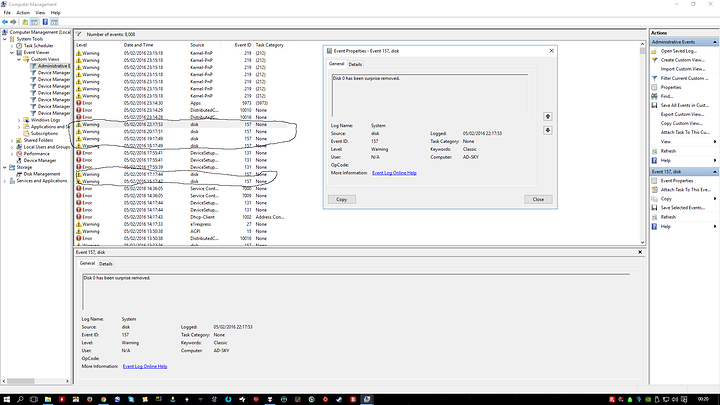 Many errors & warning due to having windows locked down ..

This is rather curious, also could you change the name of this thread to something like "[HELP] Disk Error" just so other people know whats this is about
I would get http://crystalmark.info/software/CrystalDiskInfo/index-e.html to see some more information because all I get from this is that your disk is being disconnected while in use

No worries thanks for the feedback Xeth ;)

Have crystal here mate. Ill give that a go. The disk just keeps popping in and out every hour on the hour never happens when im using it. It is indeed curious.

What motherboard are you using, and have you installed the manufacturer's chipset drivers or are you using the drivers from windows/windows update?

if you go to services, and look for "Windows Driver Foundation - User-mode Driver Framework".... Does the status stay running and what is the startup type? If the Status is not running, set the startup type to automatic and reboot.

Curious i have 2 drives connected to the Asmedia controllers on this board (there are only 2). That's disc 0 & disc 1 only with disc 0 do i have this issue.

I've also tried removing and reinstalling the asmedia drivers witch helped for about 1 day then the issue re-occured..

If the issue was a slight connection problem then the removal issue would be very random and disruptive. There has to be something in windows triggering that controller on a regular basis. Really biting the cookie here.

Possibly a format is in order. If not then mobo return. But a faulty sata controller wouldn't give a regular on the hour disconnect.