This is it, the one last piece of the puzzle has clicked into place.

After countless hours of forum scouring and DLL'ing I now have Skyrim running on my Linux install.

The last bastion of my everdwindling Windows partition has puffed it out, I don't need Windows now to run you Dragonborn.

Credit to this guy: http://ivofajardo.deviantart.com/art/Humoristic-Windows-8-BSOD-313253238 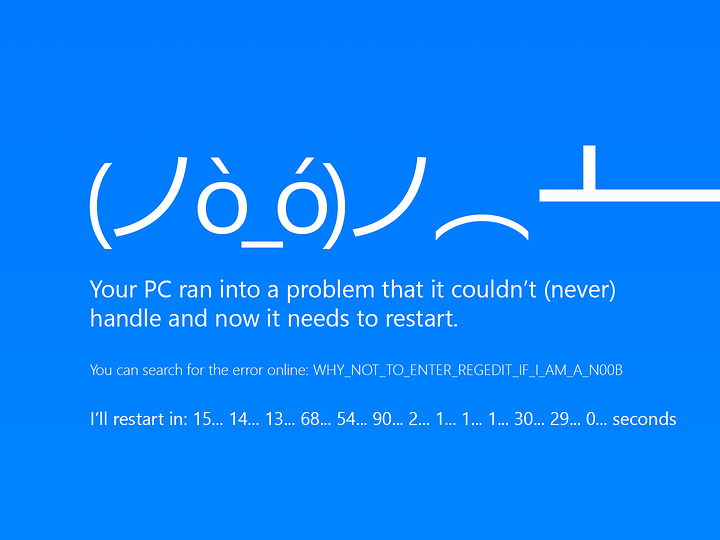 Good on ya mate! Are you using Wine? Which distro? Which drivers? oh so many questions

Running Wine through Ubuntu 12.04, can't think of all the drivers offhand but I'm also running the official hi res texture packs as well which was funny because the game would not even get past the Bethesda splashscreen without blackscreening.

Word around teh interwebz there are guys running all their mods as well, so I might have a tinker around with that over the next couple of weeks but at the moment I'm just excited that I can actually run the game looking pretty decent and not much of a performance hit (I didn't really notice any stutter or slowdown).

You know, this is awesome news. I was just thinking today how dreadful Skyrim is, it was so dreadful I couldn't finish the main storyline, and how great it can become with the right mods.

And if you need mod recommendations... I wholeheartedly recommend Requiem. It's a total overhaul and makes the game a real, old-school RPG (think Gothic meets Morrowind, with a touch of AD&D rules).

@ Ksajal Wine 1.4 and the Catalyst drivers through Synaptic so I'm tipping they're the latest versions as well.

After all the forums and the dramas people were going through it was relatively painless, most of the drama was inevitably PBKAC, mainly just .Net and a couple of dll and some directx funnybusiness so YMMV.

If I may offer a suggestion, have you considered creating an install script for playonlinux? So other can benefit from your solution?

@ Ksajal. I'll do my best but I have not written script before, but I'll give it a redhot crack, it just might take a while and because others have helped me I'll do my best to help others

I also have a good experience with Skyrim in wine, i've used a lot of mods (and SKSE) but couldn't use ENB or BOSS...

Silly me decides to upgrade Ubuntu to 14.04 and it borks half my installed programs including Open View so now I'm rocking a full Debian install, yet to try to install Steam yet

You could give this video a try for installing skyrim on linux.

all my tries to get play on linux and wine have not worked, the only thing I can think of is it hates my gtx 560.
The video does give a lot of details that may help.

Back to hell to you ancient thread!