Have I been doing file compression wrong?

I feel kind of dumb I never noticed this sooner, but I just realized when I vary the thread count used to compress files, their compression ratio wildly varies.

I have a series of 130GB mostly sparse matrix files that will compress down to 34.2GB if I use 5 threads to compress and down to 16.5GB is I use 3 threads on a solid block, 1.5GB dictionary sized lzma2 compression algorithm.

have you all noticed similar behavior?

If you can afford to rerun the test at other thread counts, that would be useful information, on the off chance that only 5 threads triggers this bug. It would also give a better sense of trend here; for example, if reduced threads really do increase compression, is a setting of 2 or 1 thread even better?

In computer science and information theory, a Huffman code is a particular type of optimal prefix code that is commonly used for lossless data compression. The process of finding or using such a code proceeds by means of Huffman coding, an algorithm developed by David A. Huffman while he was a Sc.D. student at MIT, and published in the 1952 paper "A Method for the Construction of Minimum-Redundancy Codes". The output from Huffman's algorithm can be viewed as a variable-length code table for enco... 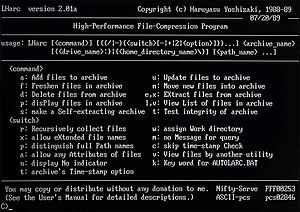 LHA or LZH is a freeware compression utility and associated file format. It was created in 1988 by Haruyasu Yoshizaki (吉崎栄泰, Yoshizaki Haruyasu), a doctor and originally named LHarc. A complete rewrite of LHarc, tentatively named LHx, was eventually released as LH. It was then renamed to LHA to avoid conflicting with the then-new MS-DOS 5.0 LH ("load high") command. The original LHA and its Windows port, LHA32, are no longer in development because Yoshizaki is busy at work. Although no longer mu...

i know its just wiki… but not everyone knows what LHZ/LHA archivers are. (so posted for refrence)

Its the Windows 7zip client via the gui. Attached are the compression settings I was using: 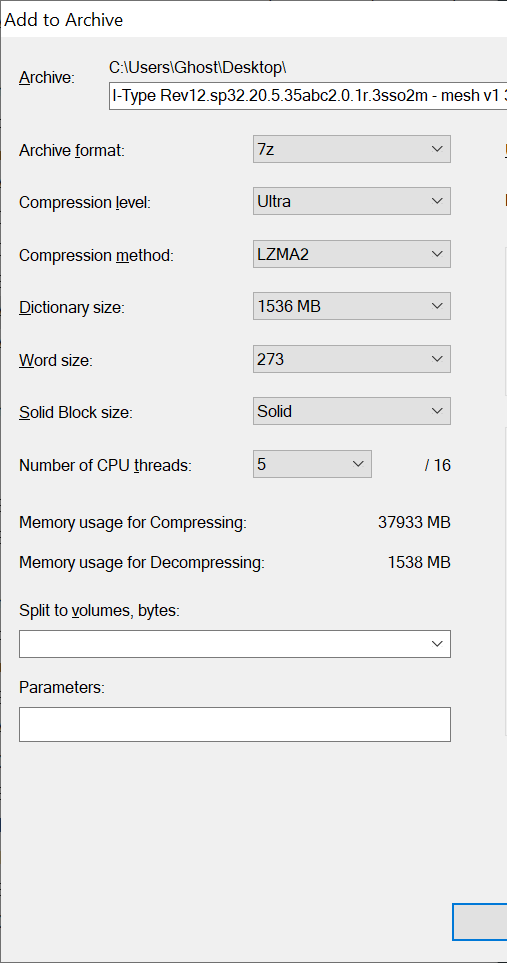 If you can afford to rerun the test at other thread counts, that would be useful information, on the off chance that only 5 threads triggers this bug. It would also give a better sense of trend here; for example, if reduced threads really do increase compression, is a setting of 2 or 1 thread even better?

I do not have a Windows install to play with at the moment, so I will be mainly speculating here.

What currently piques my interest is the memory usage statistic. ~38000 MiB (37 GiB) is a substantial amount of RAM; is there a chance that multiple threads is leaving each thread more RAM-constrained than before? How much RAM do you have? How much is used by the 7zip process or processes during compression?

If your processes are being starved for RAM, I imagine under a certain thread limit the compressed result will stay constant, but above that, the resulting file will continue to increase in size as the thread count increases.

Please be aware that with LZMA as well, I have no expert knowledge, I am merely speculating off of general knowledge; if I made a compression program, silently changing the amount of compression in response to RAM constraints would not be an acceptable feature.

You should be able to get a similar ratio to not parallelizing, by parallelizing larger blocks (e.g. 128MB or 1G chunks).

The gui to 7zip is pretty cool, it’ll give you fairly accurate estimates of memory used to compress and decompress as one plays with the compression settings.

The Ram usage to compress is mostly a function of the dictionary size and thread count. That ~38GB to compress with 5 threads is accurate, it really takes that much memory to compress with that large of a dictionary. I only have 64GB of ram on the machine I was compressing with and if I run out of ram during compression the process quits.
I was changing compression settings in response to how much free ram I had at a given time… which is why I compressed with a reduced thread count and noticed this seemingly strange behavior.

This makes logical sense to me, I figured this must be why ram usage goes up linearly with the number of threads used to compress… but then the results (end compression ratio) between different thread counts ended up being different which is what surprised me.

Okay so using the described compression settings while varying the thread count I get:

After doing this I thought to actually try compression on smaller files so I would get results in a more reasonable amount of time and lo and behold thread count isn’t affecting the final compression size when I try to compress a copy of libreoffice… I guess there is something particular to this type of dataset going on.

Most compression algorithms perform multithreaded compression by splitting the file into chunks, and compressing the individual chunks. This usually means they have different dictionaries, and your compression ratio will suffer to a degree. For large files the ratio reduction is usually insignificant.

This is the only documentation for 7z that I can find referencing this behaviour -m (Set compression Method) switch. It might explain what you’re seeing above.

I’d also suggest you give zstd a go, it’s a more modern compression program with some interesting changes in how it handles things. Though in practise I find xz / lzma always beats it at max settings. Zstd is usually faster for a given output size.

You’ll find that application-specific encoding / compression will almost always beat general compression algorithms. If you’re talking about a sparse mathematical matrix, a file listing coordinates and values will probably be the smallest encoding you can get. If your program can’t output this, you might need to write your own. If you mean some other kind of matrix then could you give us more details?

Other techniques might be run length encoding for columns and/or rows if there are lots of zeros.

This is the only documentation for 7z that I can find referencing this behaviour -m (Set compression Method) switch. It might explain what you’re seeing above.

This explains it!!! THANKYOU

Yes, these are largish sparse mathematical matrices, but there are multiple evolutions of the same geometric matrix in the file, which really lend to being compressed since the zeros between the different evolutions of the geometric matrices almost always align. These files will only ever be uncompressed and looked at if I need to go back into them to extract more subtle convergence data, so I won’t be accessing them readily which is why I wanted to compress them as much as possible since I have many hundreds of these files.

This explains it!!! THANKYOU

Details please! Does thread count >3 actually change the compression mode? From what to what?

Details please! Does thread count >3 actually change the compression mode? From what to what?

The issue is specific to the LZMA2 compression method (possibly others?) and the manual mentions the superior behavior happening in 1-2 threads (even though 3 threads seems to be the cut off for me, I think this is the same mechanism). From my limited understanding on the way the compression works: It’s not that the mode is changing between thread counts, its that the way the data is chunked into work packages for the CPU to process changes between thread counts.
​ ​ ​​
​ ​ ​​

LZMA2 uses: 1 thread for each chunk in x1 and x3 modes; and 2 threads for each chunk in x5, x7 and x9 modes. If LZMA2 is set to use only such number of threads required for one chunk, it doesn’t split stream to chunks. So you can get different compression ratio for different number of threads. You can get the best compression ratio, when you use 1 or 2 threads.