So is the HAF staker to way to go for a mini NAS? I believe it holds at least 6 hard drives, and it can be thrown on top of the nice full tower they released with it. I do wonder if they have plans to release a more NAS dedicated piece for the stacker series.

in general anyone know if the stacker cases are worth it? it seems like a good idea for space saving.

I'd like to see a stacker that's just for hard disks, like 12 or more. Otherwise there's plenty of 6 bay mini itx cases you could use.

You've had an interesting idea. I just might do that.

I was thinking more like adding in hot swap bays, and maybe including a low watt power supply they can buy in bulk for less offering a nice package.

Is there any like cheap ITX set ups with more than 4 sata ports? Because I was more thinking of an AM1 system, they have some 4 port boards and the CPUs are dirt cheap and low power.

Not cheap, the only one's I know of with more than 4 or 6 ports are the asrock avoton boards. But you could always get a RAID controller.

I'd like the stacker if you could get one that's just disks, I know you can put three racks in and have nine disks but it would be awesome to have four racks, maybe four disks high and then put than onto of the full atx haf case, that way you could add another stacker and have just a ton of disks running off of one box.

I have a Define XL (The original one which had 10 disk bays) and I recently ran out of room and was considering the stacker, but went with a silverstone ds380 build instead.

at that price I'd imagine it's more that they give you more SATA ports.

Dedicated NAS type unit for the HAF stacker - posted in Product Suggestions: Ya could you guys like come out with a dedicated NAS solution for the itx portion of the stacker series?   I was thinking something like 8 hot swap bays, maybe a nice solid w...

Hi, owner of a HAF stacker here. It's nice for a NAS but it's better from an expandability standpoint.

Take this for example: 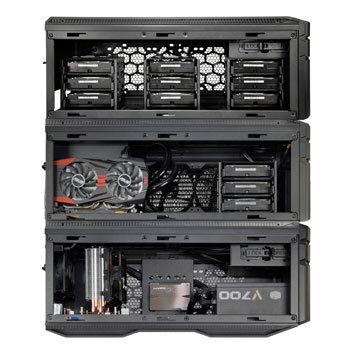 You put a mini itx motherboard in the back of the middle 915 and put a second 915 on top and put an extra drive cage in it (I used the second cage out of my 935 for airflow reasons). You can run SATA cables through the bottom of the top 915.That's 15 drives. If you add a third 915 under the master one then that's 24 drives. 2 915s is about $140 and 3 915s is $210. Since I already have a HAF stacker, this is the route I would go. But idk about the price/drive space vs other cases because I haven't researched this much. But yeah it's certainly more than just viable.

You can put 3 cages In it

Wouldn't that be without a power supply/ITX motherboard in it though?

Yes. without modding anyway. there's a lot of unused space for modding drive cages in

Aren't there cable routing holes in between the drive cages? Although I imagine they could have designed it a little differently to include at least 1 more cage.

I took some pics for you: 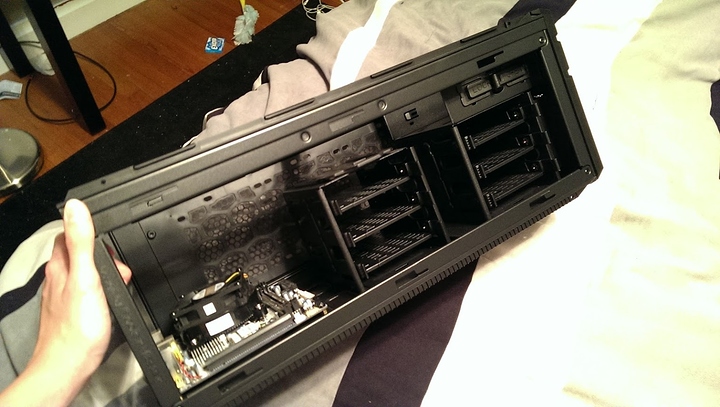 A NAS of this size would be expensive as fuck too

Also, Kyle did a build in 2 915s not too long ago if you want to see what the building experience is like: