I slightly hijacked another thread so I created my own thread.

I recently installed a second ASUS Strix 970 in my build and I feel like my GPU/CPU temperatures are higher then they should be. I currently have only thing included NZXT fans installed. 3 in the front for intake and 1 in the rear for exhaust. The 3 openings at the top are empty.

Everyone always talks about positive air pressure so it would make sense IMO to use the top 3 as intakes as well but the top is unfiltered. They would give 6 intakes and 1 exhaust. If they were used for exhaust it would total 4 exhaust giving me negative case pressure.

I originally wanted to get the LTT Noctua fans to match the orange and black on the case already. Obviously other then the CPU cooler fans bone if the others are visible anyway so I'm open to any and all suggestions.

Positive pressure is overrated, the only benefit to it is less/no dust with a sealed completely filtered case. With water cooling components you are going to want negative pressure to get the heat outside of the case. This still holds true with semi-water cooled PCs and air cooled PCs. Your main concern is getting the heat that rises through the bottom of the case, because of the GPU cards, out. Using the top fans for intakes is counter-productive to the way physics work. You will want 1,2, or 3 intake fans on the front of the case maybe a 3rd or 4th if your case has the ability to mount fans to the side panel and front fan mounting situation. The rear and top fan mounts should all be used as exhaust.

Yea obviously hot air rises. The H440 doesn't have any side fans.

Any fan suggestions? The consensus is the NZXT fans aren't so hot. So I have the possibility of installing 6 total fans.

Different fans would most likely help although I cannot personally suggest any specific brand of fan in particular, because a lot of the fans out on the market give the same airflow at a rated speed, it all depends on how quiet you want the PC to be.

Well the H440 is designed to be a quiet case, lol. I don't want a jet engine in my office.

Are all fans with a decent sound to performance ratio. 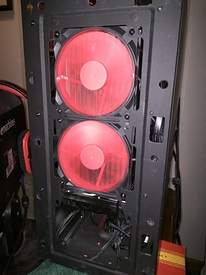 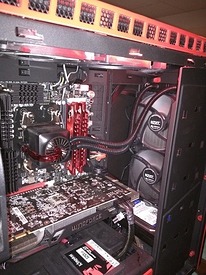 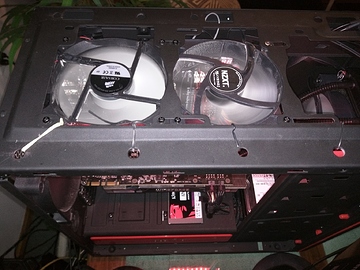 Been running like that for about a year and I haven't dusted. (Except the filter)

I tested using the lower fan on the front, and it didn't do anything for my temps. I also found that a great deal of heat was coming from the vrms, so the top fans are exhaust. Check your bios for your fan controls. Asus motherboards often have an option to select if your using pwm fans vs DC.

I was going to suggest running in slots 2 & 6 for more air, but slot 6 is PCIe 2.0 x4_3 (aka not compatible)
With the motherboard you have I would just suggest doing water cooling. Too bad, the Maximus looks great. The Z97-WS is way better, but that gold color is crap.

BTW, I would suggest getting a new window. Ordering mine soon.

Thanks @PoisonGryphon! Great info. I have my extra hard drive in the same spot.

It never dawned on me that the lower fan doesn't do anything but pump air into the basement with the power supply. Maybe I'll grab just one extra fan and put the lower front fan and new one at the top.