[GUIDE] OwnCloud with RaspberryPi 3 and FreeNAS

OwnCloud with RaspberryPi 3 and FreeNAS

This guide is intended for the installation of OwnCloud on a RaspberryPi 3 with a FreeNAS server as the storage backend.

I am aware this is rather backward as FreeNAS has an OwnCloud plug-in you can install but I wanted to see if it was possible.

The RaspberryPi 3 can be configured using my guide here.

The object is to have the RaspberryPi act as a web front end for the backend storage. Their are guides on doing this with external USB drives but a FreeNAS server with ZFS and RAID struck me as a more sensible storage solution.

The storage must be totally transparent to the user (me). I don't want to have to rely on the "external" storage module that comes with OwnCloud as these all end up with seperate folders inside your view of OwnCloud. If this was the case and I forgot to upload something to the right folder I could exhaust the 16GG MicroSD card on the RaspberryPi very fast.

As stated elsewhere in the guide my FreeNAS box is not in its "final form" yet. But once it is and I have an offsite backup in place I will replace Dropbox and Google drive with this solution.

This is part of my ongoing project to take control of my data and information from the technology giants.

In this scenario the server is headless and is accessed via SSH. At this point I have run through my own RaspberryPi 3 setup guide and amended the IP tables to allow access over ports, 80, 443 and 3306. I then turn off the Pi, remove the MicroSD card and make a back with the following command where /dev/sdf is the mount location for the card on your PC.

First install all the required packages via the command below. You will be asked for the root password for the installation of MySQL at some point.

Now create an SSL certificate. We can get a "real" one later.

Answer the prompts and then run the commands below to se the correct permissions.

Now open it up with

And paste in the next below. Be sure to change the server IPs to the one for your server (mine is 192.168.0.7) and amend the certificate paths and names if they are different.

Now edit the php.ini file and change the upload sizes to whatever you like. Use "Ctrl-W" to search the file.

and change the listening port as below.

Now set your swap space value in the below file

The purpose of these changes is to allow you to connect to your MySQL instance from MySQL Workbench running on your PC.

Edit the following file and amend the bind address as shown then exit.

Login as root MySQL user and allow connection from the IP of your client workstation.

mysql> GRANT ALL PRIVILEGES ON . TO [email protected]'ipyouwantconnectfrom' IDENTIFIED BY 'mysqlrootpassword' WITH GRANT OPTION;

WARNING: There should be an asterix in the above command either side of the . between ON and TO but Markdown keeps making them invisible.

Now check you can connect to MySQL from SQL workbench on port 3306 using the user "root" and the password you chose eariler. 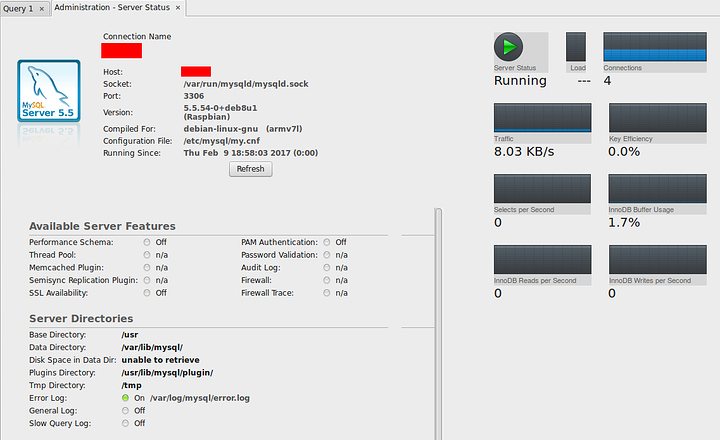 So on the Pi once again run the following commands. To be honest I am not sure if the first command is needed but it is something I ran while troubleshooting so I thought I better put it in.

What is needed are the following commands.

On this volume I have a single NFS share called FreeNAS

Now create your mount point with

These to commands make sure its is conntected after a reboot

and then edit the fstab file with

and add the following line

Please bear in mind that the Pi has a hosts entry for the FreeNAS server just called freenas. This is why there is a name at the beginning of the line rather than an IP address.

This line will mount the FreeNAS storage on the mount point FreeNAS.

Now reboot the Pi with

And log back in then move down into the mount point.

You should see at least a directory called "jails"

You can also check if the storage has mounted with

And you see 2.1TB of storage on the mount point. My FreeNAS server is not in its "final form" yet. I have six shitty 500GB non NAS type hard disks which I got out the technology recycling bin at work before they were crushed. Cost = £0

Now the next point is critical. All the storage processes on OwnCloud run under the user www-data. This user MUST be the owner of the folder where you will store OwnCloud data.

Now make the directory with

Now we want to install OwnCloud itself. Run the following commands to create the directory, download the tar, unpack it, move it to the directory and then remove the download archive.

Move back to you home folder

Now edit the .htaccess file and change the below values

We should now be able to connect to the OwnCloud installation from a we browser and run through the remainder of the install wizard. 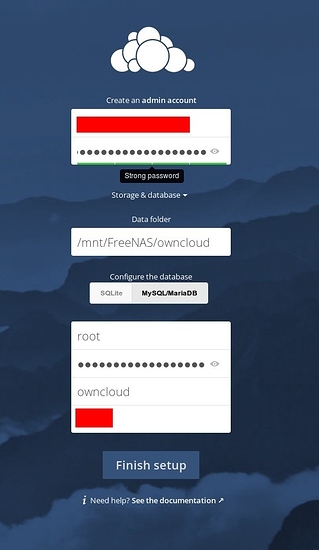 Be sure to change the localhost value for the database server to the hostname or IP of the Raspberry Pi. The database name is "owncloud" which you created eariler.

If all goes well you will be logged in after a short delay.

You can also install a desktop sync client for Windows, Mac or Linux by following the instructions here. There are also mobile clients available in the relevant stores for iOS, Android and apparently Blackberry cough

So after login I was confronted with some warning messages.

First lets sort the memcache warning. SSH back into your Pi and run the following commands.

Now we need to edit

And add the following line at the bottom of the file but inside the last bracket.

Be careful with the warning regarding Strict-Transport-Security. It may have to wait until we have a real certificate as it will attempt to stop you adding exceptions for self signed certificates.

However I added at line 26 above location = /robots.txt {
with a self signed certificate and all still appears to work plus the warning disappeared.

The warning about php can be resolved by editing

And uncommenting the following lines so they look like the below.

Exit and save the file then reboot.

The integrity check warning indicated I had invalid hashes for two files.

We manually changed these two files eariler. So I reverted the files to their default values and rebooted but this appeared to break OwnCloud. I got an error about the .ocdata file in /mnt/FreeNAS/owncloud. I then reverted back to the changed values of 1024M rebooted again and I could access OwnCloud plus the error had disappered...

FYI - The error about .ocdata comes back after a reboot if you try and login to quickly. Give the system two minutes and it reverts to normal.

For the basic OwnCloud setup I followed this guide but the Raspberry Pi setup, MySQL setup, storage setup, and server troubleshooting are all my own.