What is this machine? 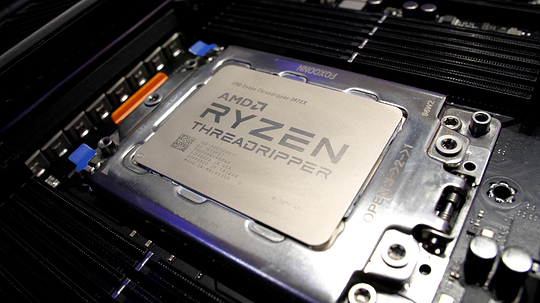 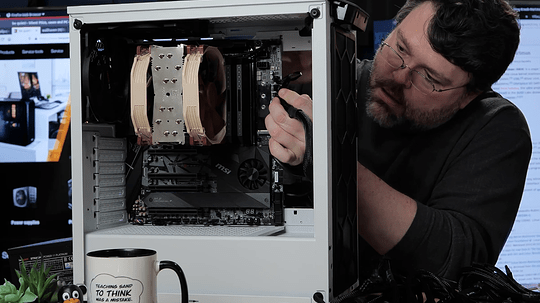 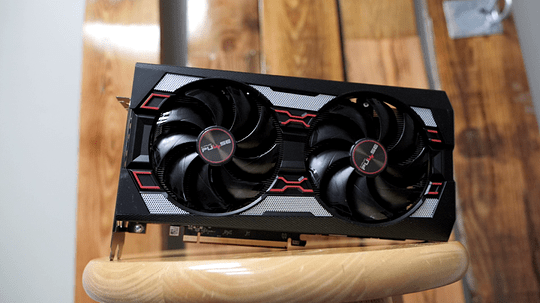 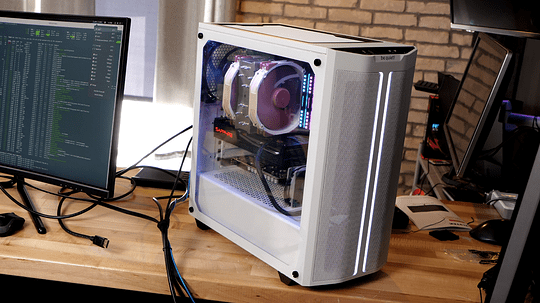 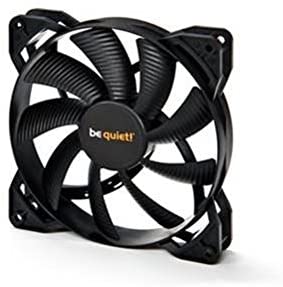 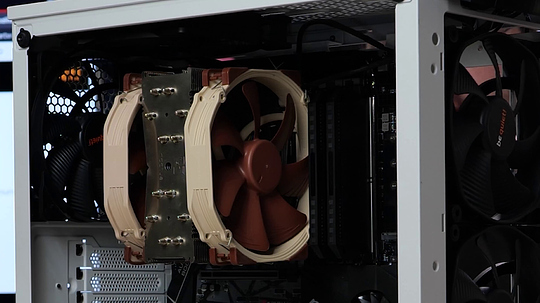 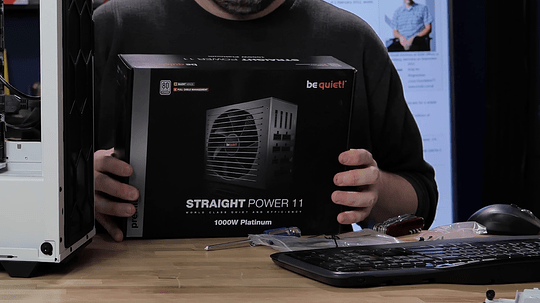 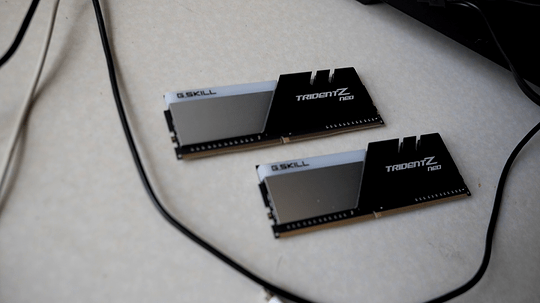 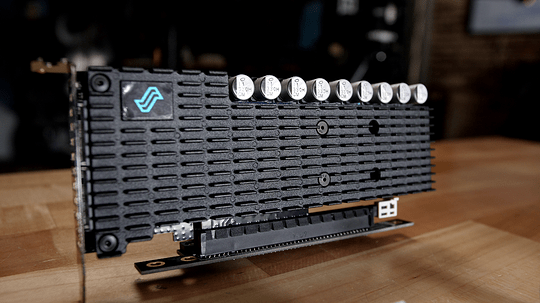 These steps are “extra” steps you can do early in the install process to setup Linux MD for raid, LVM and (optionally) LUKS v2 Encryption). 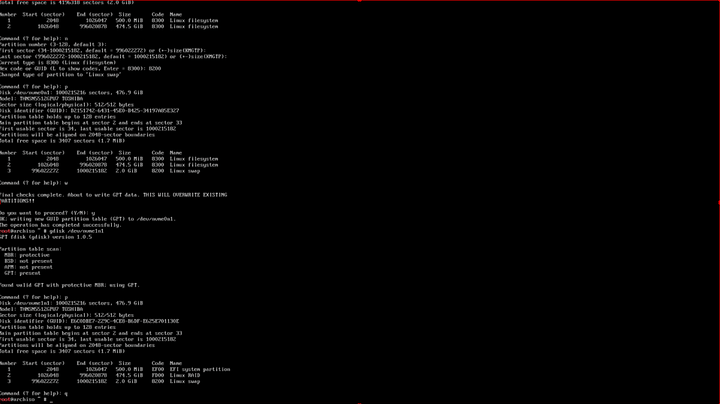 I am choosing to change the partition types to Linux Raid here in this setup step to help mdadm auto-detect and auto-assemble the md array.

I have also chosen to have my EFI partition on one NVMe device and my boot partition on another device. They are both 500m. This is an arbitrary (and somewhat larger than necessary) value.

I have also created a 2gb swap partition. This setup assume we do NOT need suspend/resume functionality.

If you DO want suspend-to-disk/resume functionality, I recommend the even-more-complicated setup of a LUKS v1 encrypted /boot partition plus a Luks v2 / root file system. But this setup isn’t covered in this how-to. Perhaps in a future how to!?

In the video, I created the partition layout manually on the first two disks because it is slightly different. If you’d rather you could create 4 partitions – EFI, Boot, root fs, swap – so that each disk is identical.

Here’s a handy shortcut for copying partition layouts from disk to disk:

You can verify by running gdisk and using p to print the parition info of the nvme devices, and verify they all have different GUID (as they should).

It’s pretty easy to setup swap at the pre-install phase. If we want to “upgrade” to encrypted swap (a must if you’re encrypting your root file system!) later.

for the partition layout given above where partition 3 is the Linux Swap type on all 4 NVMe devices, you would do:

Then you can turn swap on

(the bracket weirdness is just shell expansion because this command will take more than one argument. You can type out /dev/nvmeblahblah 4 times for each nvme if you aren’t ready for that yet)

will confirm swap is operating now: 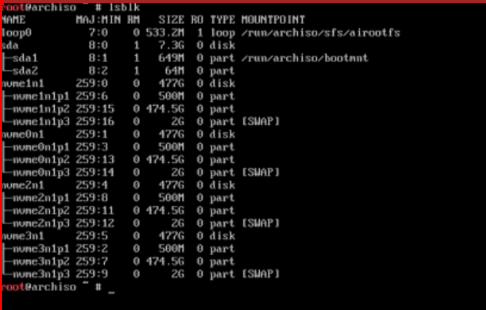 The arch wiki has some more info about encrypted swap, and the suspend-to-disk option:

I mostly wanted to put this here because the Arch Wiki, in at least one place, talks about creating a 4-way raid 1 (???) partition on the md device and using that as swap… but this is extra unnecessary overhead since the swap subsystem on Linux will stripe across devices anyway. If you lose an nvme disk, though, it could crash the system. For desktops this doesn’t matter. For servers I would either make a small swap file on the file system (yes, lots of overhead, but on a server I’d mostly rather out-of-memory than get really deep into swap) OR otherwise not use a nand flash device for swap in a server or serverish context.

This option is to use Linux Multi-Disk Admin (mdadm) to setup soft raid in Linux. This is an extremely well-tested and battle-hardened software raid solution that works great with NVMe devices like this.

It will tell you what md device it created. In our case it was /dev/md0. Sometimes it might be /dev/md127 or some number other than 0. Just be aware

Then you can cat /proc/mdstat to see if it created the array properly:

If it did, we can do the LVM thing on this large array device.

We have 4 NVMe devices with one big partition each.

If you intend to use LVM without Linux MD proper, then first it is important to make sure you selected the right partition type.
Instead of Linux Raid type, you want Linux LVM type (8e00 instead of fd00) for your partition type.

This is one place where the Arch Wiki isn’t as good of a reference as RedHat’s documentation: 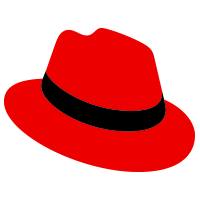 
^ This is a good supplemental read to understand what LVM offers today. If you research too much you might see 5+ year old threads that talk about LVM shortcomings vs mdadm but since 2019/2020 this is mostly not really a thing anymore.

*Note: notazpool is just my cheeky name for this logical volume. haha. And volgrp1 is another arbitrary name. *

Continuing on – What about encryption??

You can skip this step if you don’t want to encrypt your root partition. Skip down to ##No crypto for me please!

The Arch wiki has some good info:
https://wiki.archlinux.org/index.php/Dm-crypt/Encrypting_an_entire_system

You can elect where in the stack to insert encryption. Before LVM (no matter what way you’re using LVM – with or without Linux MD), After LVM, between Linux MD and LVM, etc. There are also “side effects” given that the /boot partition (where the initial ram disk should be) can only be LUKS v1 encrypted and generally cannot be a Linux MD array or another “complex” disk option.

For this guide, I am not going to cover encrypting the /boot partition because your encrypted /boot LUKSv1 partition will likely be setup to contain your LUKSv2 decryption key, if you go that route. Otherwise it’ll ask you for two decryption keys on boot – one for /boot and one for / – which is undesirable. Just be aware that this is an option that exists.

To continue on I’m assuming you’ve assembled your raw disks into one big pool. Either at /dev/volgrp1/notazpool OR /dev/md0 depending on if you went with LVM or Linux MD to handle your needs.

This should work whether you went with a LVM on Linux MD or just plain LVM, above:

It is important to configure the system so that it will boot again with this same config, which is a bit tricky and the Arch documentation seems to be incomplete/wrong.

I had a lot of trouble with this step, actually, because I initially opted to use system-d for the initial ramdisk. In /etc/mkinitcpio.conf I had a setup such as:

However when booting, this would result in systemd immediately trying to mount /dev/mapper/root without ever prompting for the luks password! I even tried enabling GRUB’s luks support (which, really is only for the v1 boot partition support, not what we’re doing here).

then just type exit and arch would boot normally.

What I ended up with in my mkinicpio.conf that does work:

And my /etc/default/grub configuration:

Useful commands to help you achieve this, maybe:

The rd.luks.name syntax is supposed to be the sd-encrypt syntax, however without the encrypt package, the cryptsetup binary is not packaged into the initial ramdisk. It does NOT hurt to have both and having both is handy for that maintenance shell, if you ever need it. Otherwise you have some systemd manipulation to do to try to get it to start the crypt service. Systemd may work better with /etc/crypttab for the encrypted boot scenario where you really just unlock /boot with the passphrase, which then contains keys for unlocking one or more other partitions.

NOTE: It would be a good idea to setup encrypted swap in crypttab! There is even a facility for this where, at boot, it uses a random password. Effectively swap is scrambled on every reboot AND it is somewhat lower overhead vs being part of the LVM volumes, which is super nice. Also note that this setup gives a way a bit of info in that you can see how much space is used within LVM. You want to read over the arch wiki that talks about discard and trim. I think you probably want trim/discard, for performance, but that lets an adversary see how much data you’ve actually used on your SSD. For truly high security I would probably do something completely different with this setup. A tangent for another day…

I was kinda surprised the Arch documentation was lacking here, and that sd-encrypt was, apparently, hot garbage. I checked another (older) machine I was doing LUKS experiments on and I do think there has been some kind of regression with Arch + Systemd on the initial ram disk, when using luks inside of LVM because on that other machine w/older packages it worked fine.

No crypto for me please!

We just need to format the logical volume you created earlier, if it is not to be encrypted, and mount it at /mnt for the Arch installer:

It is safe to proceed with the rest of the arch install from here. HOWEVER, be sure that before you reboot you verify that your mkinitcpio.cfg file contains the modules you’ll need for the LVM, Luks (optional) and Raid stuff to work:

See ## Configure the system on the Arch Linux on LVM link above, and the LUKS link to add the modules.

For example mine is similar to:

Need to make sure Trim is setup on the SSDs the way you want, or eventually it’ll slow down (/home partition is not trimmed by default, I guess?)

running sudo fstrim / is maybe a good idea from time to time. There is a service you can enable that will do it periodically.

Using Crypto? Make sure your SSD properly supports trim (see Arch docs) then you can append

as well as updating lvm.conf to allow discards:

(it has a section comment about this, read it!)

I also installed cpufreq and freon, since I was using the Gnome desktop environment for this build.

Each of those components has been hardened and has been well-battle-tested over the ages. It is modular.

ZFS, on the other hand, features similar components but also provides even more features (albeit with somewhat more overhead). The ZFS answer for snapshots, encryption and volume management is mostly very clean as compared with the above patchwork, but is perhaps somewhat less flexible in one or two use-cases such as expanding the volume after-the-fact (vs what LVM is capable of).

Also, we’ll get to you. I want to do this same sort of writeup, but a “ZFS on root” sort of version of this.

How are thermals with that little (smaller than U12 or U14 models) TR4 air cooler?

Oops that was copy paste fail. See the pic. It’s the u14s anything else is not enough

Just signed up. Love this video as well as the one on the 256 Kit.

Any update on the cold boot issue?

From everything I’ve read and experienced you want to buy just one kit. They are qualified to work together. I bought some trident z 3200mhz for z390 and had problems running them at the rated speed because I bought two kits of dual channel memory.

Thanks for the detailed build. I replicated it almost exactly, except for the RAID part. Instead using a PCIe 4.0 NVMe drive (Corsair Force MP600). In the BIOS I setup UEFI only to boot and installed Windows 10 first. Works fine, drive is recognized.

When I install Linux only (Manjaro) it works also, but after switching off the computer it does not boot anymore from the Drive. It is recognized in the BIOS. It seems that the drive is corrupt. When I use a bootable USB drive I see with gparted that the UUID cannot be found (drive does not contain any partitions anymore).

Who knows where to look how to fix this? Thanks in advance for any pointers.