quitting his day job at Intel

Wow he quit? He must have a whole bunch of retirement saved.

Wow he quit? He must have a whole bunch of retirement saved.

I’m sure he was well compensated for the work he was doing at Intel. It sounded rather involved.

But! To answer your question: Yes, he is a full time Solus dev, living off of Patreon I believe.

I reviewed Solus when the “WEHHHH MY LINUX BETTER DEN URZ” bullshit was on the forum and driving me fucking nuts, then again when it sounded like it had actually become an OS worth any salt. Its OK. I’m a void Linux and Ubuntu user though. Potentially Suse and Slackware soon / again too.

When was the last time you’ve used Solus? I feel like he pushes a lot, and things change periodically. It’s definitely the first rolling distro I’ve been comfortable with in a while. Makes me consider going back to… btw… I use… No, no… Not yet.

openSUSE was definitely one of the better systems on my Inspiron 3000. I fell in love with KDE on that OS. Never used Slackware. Heard mixed things. Worth a try in <insert current year>?

Solus seemed alright when I tried it but…

When was the last time you’ve used Solus?

Another Gander at Solus OS: V3 This Time! Blog

Alright, so I am re-reviewing Solus. I said I would do an update post from my first Solus post, so I thought now is a better time as any with all the tiny adds to the kernel lately. Add to that that the small things added to Solus recently and talked about on Jupiter Broadcasting shows I’ve been relatively excited to be honest. I am writing this on my test machine while I dig through Solus. First off I am impressed with Solus already. The software center is grand IMO, and the options to change to dvorak were not hard to find. Good touch typing practice!! On with the review. First off, I like the pre-packed software. I forgot how much I like rhythmbox and not enough OS’s come with any IRC client installed. As I said earlier, I do like the Software Center a lot. I like how its formatted; like a shiny Synaptic Package manager. Only thing is theres no apps in it past what the devs probably use day to day but missing some stuff like Vivaldi, Kdenlive, and other apps that are a must have for me at least. So, requests will be made on that end. Positive there though, the devs are MUCH more open to suggestions now compared to the last time I used Solus. Baby steps, but at least their attitudes are better now and in turn, mine is as well. Though the bonus of watching it develop over time helps with the user side angle for me. Probably adds bias though so I’ll be careful here with what I tackle. I know Budgie is based off gnome, so I don’t know if the options menu’s are just carried over from that, but a nice consolidated menu would be neat to have rather than digging through the start menu. With that, if I could add XFCE that would be super chill in all honesty, seeing as thats how I normally set my stuff up. Back on package management, I am completely ignoring the terminal with this OS. Until Eopkg is replaced, I still think that terminal package management is completely pointless. It could be replaced with the BSD manager PKG, I don’t care, FU to Eop. …

openSUSE was definitely one of the better systems on my Inspiron 3000. I fell in love with KDE on that OS.

I’m over KDE and Gnome both. Both are trash and until KDE has the settings menu XFCE has and Gnome isn’t a total pile of shit I will use literally anything else.

Its linux. Use it or don’t.

I am the lord of wine. What issues are you having?

This happens pretty often, especially here. People extol some distro or other, praising how amazing it is. I feel like I could like it, and maybe spin up a VM to test it. I get tempted to actually install it on my laptop.

But then I realize how comfortable I am with Fedora. I have had this install of Fedora running for just under two years at this point, upgrading along the way. And it’s been on two different laptops. It just works, and it’s just so stable. It does everything I need it to do. I’m just about to the point of updating from 26 to 27. I usually stay about a version behind. If anyone knows how to turn off the “Software Upgrade Available” messages that would be appreciated.

But that doesn’t stop me from experimenting. I tossed Solus on an older MacBook Pro. Didn’t install wifi drivers, and I haven’t touched it since. I installed Slackware in a VM to play around with. I am considering trying Void out, as it sounds interesting. I’ve got an old Sandy Bridge i3 Lenovo Edge desktop sitting here I can test stuff on. May be fun to experiment on bare metal without risking anything.

But nothing will replace Fedora on my laptop, desktop, or server. Maybe CentOS on the server if they adopt DNF.

This happens pretty often, especially here. People extol some distro or other, praising how amazing it is. I feel like I could like it, and maybe spin up a VM to test it. I get tempted to actually install it on my laptop.

this happens to me a lot, but I quickly realise that outside of the main 4 or so distros, I would rather have a loofa enema than try doing it on a actual machine.

For me personally my OS is what I interact with. I get that people CAN sit on an install for 2 years, like you have, but I really don’t understand how I could.

Prior to Void I was in-between POP_OS and Ubuntu 17.10. One would break and I would go to the other. Been like that since the 17.10 release dropped. Before that I was on arch. I left arch because every 18 updates a kernel would explode and force me to reset and for YEARS I have been looking for a proper staged-rolling OS solution. Void fits that bill perfectly. If I forget to update for a wekk, 2 weeks, a month… It really does not give a shit. It’ll just be like “Oh you’re a bit behind mate. Here, lets take all this shit you’re runnin, sandbox it real quick and lift it up, plop the updates underneath, and you can reboot whenever you feel like (just make sure you do).”

Now… The update and reboot thing gets a little old if you do it often… But you don’t need to do it often. Like at all if you wanted. You could stack your updates on top of each other and live boot the newer kernels if you wanted to and never have to reset at all.

Runit makes things arbitrarily easy. Its almost sickening. “Oh you want this to run at boot? Symlink it and get back to your game or whatever” Its like the Just Ain’t Care of inits. I love it. Odd to that that the OS is the BSD of linux and no matter what it stays interesting. I don’t want to hop anymore I’m finally happy with something.

And that pile of shit called gnome is fuckin gone.

until KDE has the settings menu XFCE has 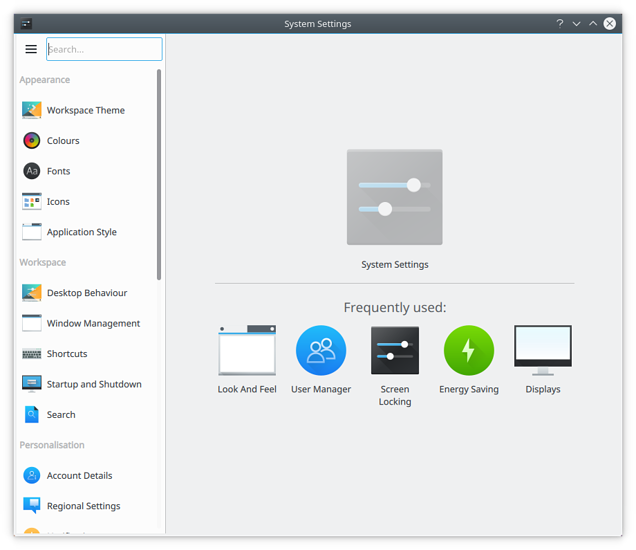 here’s a video set at the exact moment to not waste your time.

People extol some distro or other, praising how amazing it is. I feel like I could like it, and maybe spin up a VM to test it. I get tempted to actually install it on my laptop.

But then I realize how comfortable I am with Fedora.

I was in your shoes about a year ago, until I was introduced to Debian Stretch. I had just hashed it out with the Arch Linux community, and I was DONE. I had Fedora on three computers. I had tried Jessie, and whatever was before that. But the nVidia installation process was poorly documented and not very good.

However, in Stretch a lot of that improved. So, I had Fedora on one workstation, Debian Stretch on another, and a floater machine to try various new things or just keep FreeBSD on it.

I follow Jupiter Broadcasting, and they spoke highly about Solus. I couldn’t get it installed on my desktop, so I didn’t bother. Eventually I got it on my laptop, and it was alright. A decent experience.

I think it was built for a suped up workstation though, and it is awesome.

I recommend giving it a go. I understand if you’re wary of rolling release, and I once though I’d never leave Fedora (still have it, just not on my desktops). But, I went from kernel 4.12 to 4.15 without a hitch on the most recent Solus update. My only other experience with rolling (Arch) told me that my system was going to tank, / partition was gone, and my backlight was going to be dead.

similar situation. been a mint fan boy for years tried a few others but i always seemed to land back on mint.

Installed manjaro last year and havent left. everything works and updates with 0 issues.

Late to the party, I’ve been OOO for a while.

Solus is great, but there are a few things that I found to be unsatisfactory. I’m not able to get my Intensity Pro working on their stock kernel with DKMS and there are a few issues with kdenlive. I’m patiently awaiting their KDE ISO to try it out again.

You’re definitely welcome to PM me if you have any questions. That goes for everyone on the forum, part of why I’m here is to be a resource for those who have questions or want to learn.

Not being facetious, but isn’t that an issue on all systems? I’ve never used it, but I always hear bad things across all channels.

Not being facetious, but isn’t that an issue on all systems? I’ve never used it, but I always hear bad things across all channels.

I’ve had more success with kdenlive on Ubuntu, but yes, kdenlive is a high-maintenance bitch.

Did they ever end up getting the multi-monitor support fixed in Solus Budgie? I remember that and not being able to get Starcraft II working being what made me switch away.

Did they ever end up getting the multi-monitor support fixed in Solus Budgie?

How long ago did you have a problem with it? I’ve been using it on multi-monitor systems since early 2017 with no problems.

Well, multimonitor ‘works’, but the problem I had with it was that the taskbar was always over something. This was a problem when it was on top because it would overlap the menu bar as well as minimize/maximize/close. On the bottom it would cover up other random things like “OK or Cancel” buttons at the bottom of the screen. There were a few other oddities that I ran across in the UI that just showed the multi-monitor support wasn’t as polished as most other DE’s. This was a few months ago, so fairly recently. Using it on my laptop though everything worked flawlessly when both monitors were in landscape.

the problem I had with it was that the taskbar was always over something.

Yeah, I definitely don’t have that problem. (in fact, I’ve never encountered that) I wonder if it was just a fluke from your install or a hardware-specific bug. Might be worth asking about it on /r/solusproject. Ikey and Josh are active on there, so they’ll be able to give you a more conclusive answer.