I’ve been slowly putting together a gateway 2000 computer with all of the original accessories. All I have left to acquire is the gateway branded mouse. Anyway, the person I got the Gateway tower from had removed the expansion cards years ago, so I’m effectively starting from scratch. Think of this like a barebones system. It comes with a CPU, ram and a PSU, but that’s about it. (I’m replacing the old HDD with a 4GB CF card)

I’ve got literal boxes and boxes of old graphics cards, CPUs, RAM, sound cards… you name it, I’ve probably got it. At least… as far as PCI goes. I’m short on ISA stuff.

Excluding Voodoo, what should I slap in this system? It currently has 64Mb PC-100 RAM and a Pentium 166. I plan on (if I can) upgrading to a Pentium 233 MMX. I’m interested in upgrading the memory but I -think- the motherboard only supports up to 64Mb of RAM, so I may be out of luck on that front.

I was thinking Riva TNT, Soundblaster Live, a USB card and an ethernet card. Any suggestions? Keep in mind I only have 4 PCI slots to work with. It had 3 ISA slots, but as I stated earlier, I’m a bit short on ISA stuff. It will have Windows 98se as the OS

(Also, if anyone has a Gateway 2000 mouse please let me know, I’m in the market if the price is right)

Well, I’ve decided on the Riva TNT for now, I’ll switch to a Rage128 if I need to later on. I’m also going to pseudo dual-boot. I plan on having Win98se on one CF card and Slackware on another. Maybe an early version of Debian…

I’ve changed plans a bit, I’m no longer going to just install Windows 98SE. I’ve got a CF adapter that fits in a PCI expansion slot, so I think I’m going to use that and that will let me switch operating systems with ease by just changing CF cards. I’m going to try Slackware 1.3, Debian 2.0, Radhat 5.2 and a few others like Corel 1.0. I thought about trying the first Ubuntu release, but the motherboard only supports up to 64 meg of RAM, and I’m 99% sure Ubuntu 4.10 will not run on that. All examples of 4.10 running that I’ve seen puts it right around 110-120 megs at idle on the desktop.

I’m still missing the mouse, but here is a sort of mockup of what the final look will be. I haven’t refurbished anything yet, so everything will be a LOT cleaner once I’m done. I’ve used a microsoft intelimouse as a temporary mouse, because the Gateway one I’m looking for is literally just an Intelimouse with a Gateway logo on it. 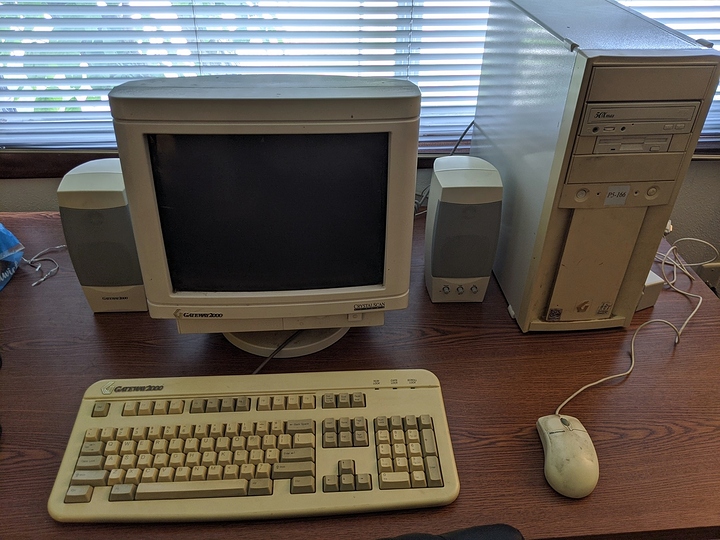 I accidentally stumbled across a second Gateway 2000 monitor, but it is much newer. It still has the Gateway 2000 branding, but the style is much more “late 90’s” and doesn’t really match. However, the maximum resolution that is factory supported on the old one is 1024 x 768 at 60Hz, but the new one supports either 1280 x 1024 at 60Hz or 1024 x 768 at 85Hz. It’s really tempting to switch to the newer monitor since it almost matches… plus it has a much larger screen… It’s tough. The older monitor came with a 386-era Gateway, while the newer one came with a PIII era Gateway, while the Gateway I have is square in-between with a Pentium 166, so no matter which one I use it’s going to be wrong.