I'm not going to lie, I just need a pc for me to occasionally play steam games on and then for my wife to use chrome when she wants to stream her movies online. It must be a small form factor and have as SSD for boot up. I was thinking about using Steam OS. My TV is just a standard 1080p set-up. I will have a CAT6 cable running to this device so no WIFI is needed. What do you have for me :) 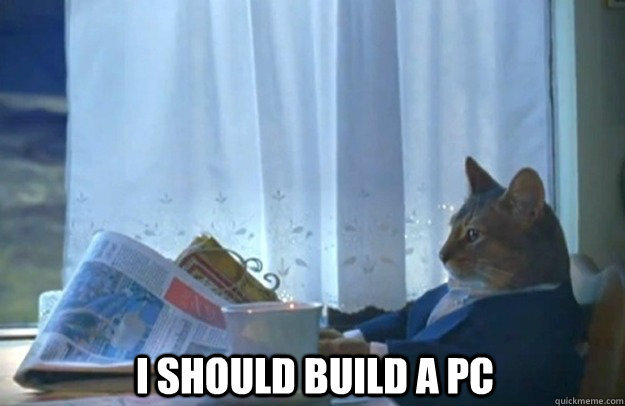 That will do you pretty well. Good for couch gaming and whatnot. For your hardrives set /home to the 1tb and give it like 6-8 gb swap.

looks good to me.

itx might be an option, depending on how small it should be.

Something that could be mounted on the potential vesa of your tv would be ideal i guess.

To me if you're building a box it should be good. I would build a TV PC to be a back up PC for if a main one died.

A10+2400mhz RAM should be solid, mostly it lets you get a 480gb SSD and a really tiny case, it'll also be relatively low power

You said you were going to be using this for gaming and streaming movies so I though HTPC
http://pcpartpicker.com/p/X4Qmt6

here is my take

Okay, the first thing that comes to mind when you say your wife wants to watch movies is... You my good Sir. need a quiet pc. not just because of your wife but, because no one wants to hear the thunder of fans while watching black beauty. It really kills the mood. So I have a dream picked out for you. http://pcpartpicker.com/p/RP4HHx

now o word to the wise the case i have is not the easiest to build in. if you haven't build a computer before i would recommend going with the Silverstone PS09B MicroATX Mid Tower Case. That said the case i have will blind with a audio/video Receiver. also you got a fan-less power supply. if your not a quite Nazi you have options http://pcpartpicker.com/p/xYk2dC just dont be a fun Nazi and pun the fun in camps... best of luck.

I would probably not use Steam OS just yet. What I've heard is that it is based on a somewhat dated Linux distro and I do not think that stuff has been backported that far. But hey, it's Linux and therefore free so give it a try if you want to.

I have the FX 8320E and a Gigabyte 970 mainboard as my daily driver (some Radeon HD6870 or something as GPU) works fine under Linux out of the box. There is a command for the proprietary driver to directly control the GPU fans speed for each fan of the GPU via command line. So you could handle the fan speed without any additional software. I have not yet taught my GPU to hum the German national anthem. Yet.

The 860K's probably going to be the way to go if you're wanting to game on the thing too, it's pretty much the least you can get away with.
If an SSD's a must, at least make it 120GB so you can stick some basic programs on it too.
If it's being used as a HTPC, you might be saving movies to it so I included a 1TB HDD.
The case has soundproofing - so should keep pretty quiet.
The CPU cooler's a noctua NH-D9L, so also should be pretty quiet.
Included an R9 380 for your gaming needs.
PSU's OK. Semi modular which should help considering the case's main downfall being the lack of cable management options.
RAM's the cheapest 8GB kit I could find that was decently timed
Motherboard should suffice, you're not OCing and it's plenty of SATA 3 ports...

It's $50 over, albeit. Can cut out the HDD if you feel you don't need it and that'd put it under budget. Maybe tone down the GPU instead, or cup the CPU cooler. Whichever you value the least.

It's essentially a $430 gaming PC with an ODD, SSD and fancy CPU cooler.

I wouldn't called Debian 8 "dated". That is just the FUD going around bashing SteamOS because Valve chose to use a Stable Debian platform codebase instead of the Unstable "bleeding" edge that is Ubuntu. Plus Ubuntu releases a new version every 6 months whereas Debian has rigorous checks and stages of development before a release to ensure the packages are mature enough to not cause OS instability and software crashes like I am sure most Ubuntu users are familiar with the "something happened" message.

Okay. Then my information was old. Some earlier version had a quite old base or something.

Anyway. I'm curious whether they can stay completely stable with all the new drivers games require and other stuff. But that is offtopic here.

I coughed this one up.. https://pcpartpicker.com/user/Lamaa/saved/#view=tXb9TW

That seems quite nice. I'd grab a semi modular PSU though, at least, that's a small case... and perhaps see if you can grab a slightly better GPU too. There's also cheaper SSDs.

There's no ODD, though, too. Could get a USB one though I suppose. That'd be way more useful.

Okay I fixed it. http://pcpartpicker.com/p/JkkFVn