I have wondered why this is I have never been able to find a ITX board for am3+ is it a power delivery/heat issue?

Power delivery would be one of the issues yes.
Wenn Buldozer Vishera came to the market mini itx wasnt realy a thing.
Nowdays am3+ is so dated, that it would not realy make much sense to develop a decent mini itx board for it.

Its to bad I still like alot of the AM3+ stuff for the money. Hopefully When / If AMD releases something of significance in the CPU space these chips fall in to a $50-$75'ish price range and the market could be flooded with a great value chip that could replace a lot of the other dated solutions floating around still

I realize the AM3 + stuff is dated too but I think its way better than a lot of the other stuff still offered.

Can you try playing at a higher resolution, with VSR?

Either way, I would monitor your frequencies while stress testing, or playing the game, to see if they are staying where they should.

been looking for that where do i go to turn this on ?

what is your fsb speed?
do you have two memory sticks or 1 (fallout actually benefits from the extra dual channel memory bandwidth)

i just have 1 stick of 8gb and im not sure what fsb is ? noob moment here sorry

Open the Radeon Settings, then there should be a tab called "Display." Click that tab, then enable Virtual Super Resolution.

With that enabled, you should be able to run a game, then, in the in-game visual options, be able to selection resolutions "greater than" the monitor's native resolution.

ok guys i did some tests i'm not sure what to think i'm to new to this as far as i can see my cpu never throttled i could be wrong when OCCT finished it created a folder full of pics iv uploaded them to my google drive can you guys tell me if you see anything wrong link here: https://goo.gl/xpD2xp

also here is a screenshot i took 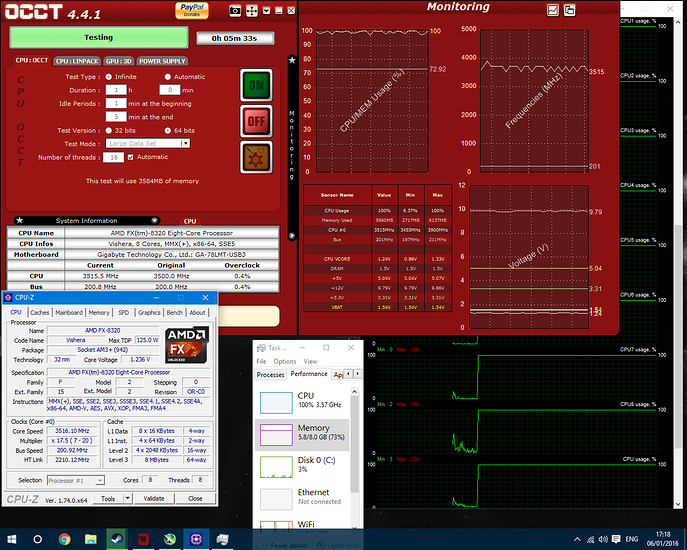 posted results of OCCT any advice ?

posted results of OCCT any advice ???

Do you have the temperature results from your testing? It looks like your CPU isn't able to maintain it's turbo core frequency, possibly due to thermal or power restrictions. The constant variance in CPU clock can't be good for performance.

I also have an FX-8320 and, because I had to take down my custom water cooling, I was recently running it at stock clocks with an R9 280X GPU and performance in Fallout 4 with high settings at 1080p was very good. So my own experience is leading me to believe something is really robbing you of CPU performance.

From the Screenshots your 12V Rail is sitting at 10V ?
I think that might be a bad read? might want to use a Multimeter and double check.
What your PSU?

FIXED IT GUYS nothing to do with my systems hardware would you believe me that all i had to do it test it with a different screen ........i borrowed my sister's 22inch 1080p tv just because something was telling me to test it .......and result :) ran fallout 4 on high at 60fps and all other games stopped having issues and as soon as i went back to my original monitor issues came back