a couple of days ago i started ocing my fx-6300 which seemed pretty easy and i was 5hour prime stable @ 4.5 GHz and 1.352-1.360v. Yesterday i got a bsod while watching youtube video. I wasn't in mood to start solving anything so i presumed that its caused bu unstable oc, and since i was far from dangerous voltages, i just went one step higher. I was a bit surprised that cpu-z still was showing the same voltage. I added more, and more, until i had 1.35 set in bios, but cpu-z and other tools were showing same 1.352-1.36 (difference between bios setting and actual readings was bigger before). However, after having HWmonitor running for a while i noticed that voltage does go higher when under load. At the moment, running prime95, its 1.4v, jumping to 1.416 every few secs. The weirdest part is, that in the middle of prime test frequency went down to 1.4Ghz and voltage to 0.896 (can be seen in screenshot)

So is this behavior normal, or may i have missed some bios setting or smth? Voltage seems jumping way too much imo. 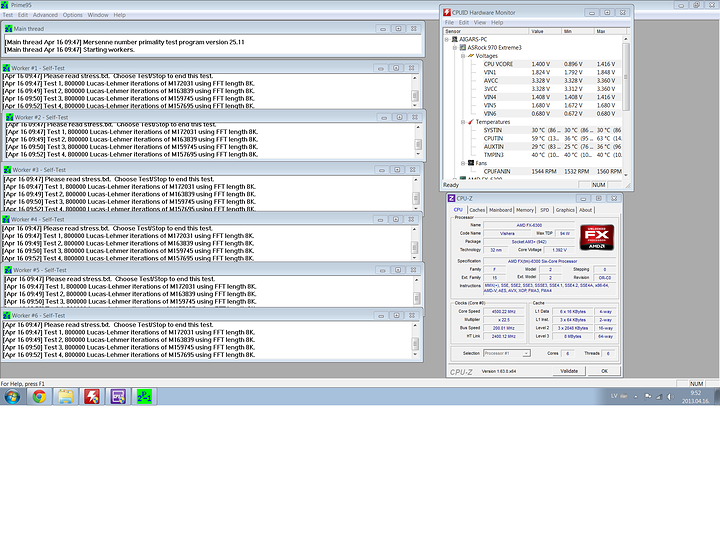 I guess that BSOD at youtube wasn't related to cpu overclock, because i have other video related problems atm, like freezes and lags playing any video with any player. I will check drivers codecs and whatnot, but the question remains the same - is this voltage behavior normal/acceptable? Basically vcore is 0.05v higher than i set it in bios, and it jumps up and down as it likes. My girlfriend's system, which is basically the same (except  HD7770, corsair CX500 psu, intel 330 ssd and no OC) and the voltage does not jump like that, and is only 0.01 v away from bios setting.

Yes you have to turn off power saving mode on the cpu to get a constant 4.5ghz and 1.4v etc.

Yeah, turn off Cool'n'Quiet and all that jazz. That will get it more stable.

Its was the first thing i turned off before ocing..

Update: i tried resetting bios to default settings and it helped with video problems. Now i'm thinking.. If prime says that cpu is working fine at that overclock, but at the same time i get some video problems, could that be because of Northbgidge? Should i OC it or add some voltage?

Yep did you OC your gpu at all?

Ok so yea just play around with you NB voltage. Lowering it could also help. I know it helped when i OCd my cpu.

It is probably vboost. I had it in my UD5 when i was overclocking my 1090t and 8150. The UD5 was VERY bad, it had almost a .1v vboost, which limits overclocks because you have a nice high OC and then the voltage boosts, well sometimes to can create to much heat, so you have to down clock

I looked into this problem and it has to do with the power regulation on the motherboard and there are no bioos options to change it. It is a hardware problem. On the UD5 there was a hard mod that you could to to turn off the vboost, but i never tried it. (it is why people recommend the UD3 (which does not have a vboost problem) instead of the UD5)