I am running freenas 9.10.1 and I am experiencing very slow speeds. It is ready inconsistent. Server minimum protocol is SMB2 and max is SMB3_11 if that means anything. Sometimes I can get 100MBPS or close enough im sure its not my HDD's they are good quality and new. 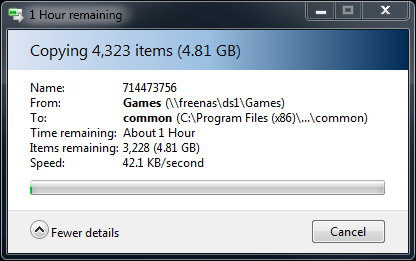 Looks like you're transferring a lot of small files, small files will always be slow so it's pretty normal. How are the speeds with large files?

Still slow, I have also ran a test on other computers and they all are going slow.

What are the server specs?

And what speed are you getting with larger files? and what size are the files?

Well I just did a test and for some reason even with t he same file at the start im magically getting 90MBPS and now its dropping down to 30. With the one file atm im getting 20 ( its dropping down again). This is what I mean by inconsistent.

That'll be the cache giving you the high speeds. How big are these files? Also what raid level are you using?

These files are about 5 GB. and I only have one HDD so no raid.

I'm not really sure what the problem could be, a single 5gb file should transfer much faster than that

Well I am new to this sort of stuff and I want to learn maybe I misunderstood is ZFS a raid level?

I mean is it RAIDZ1 or Z2 or something like that, but if it's just a single disk then it's not any kind of RAID. ZFS on a single disk shouldn't slow the read speed down, certainly not that much anyway. I haven't used freenas much so I'm not really sure what to check.

Hmm well what do you recommend me to do? know anyone who knows a lot about freenas who could help me out?

Not really, I'm sure someone will show up.

Not really sure what to check

Well thanks for the help so far.

Do you have another PC/Laptop to check network speed with ?
Have you tired just using a cross over lead ?
Have you checked the network leads ?
Have you tired different network leads cat5e/cat6/cat7 ?
Try booting a live disc or Live USB linux distro off USB stick/cd (eg debian)
and see if you get same speeds
Replace network driver, try NEVER to use mobo drivers on disc
or built in windows ms drivers, grab some from realtek.com.tw/intel.com/etc

Im updating drivers atm but I have already tried it on other computers and with other leads.

Let's take Samba out of it for a moment, fire up FTP and test transfer that way. I feel like if you get similar performance there, then likely your problem is the single disk. How's your ARC hit ratio under the Reports section?

I'm getting similar performance there but now if I use samba I'm getting 90 MB/s..... 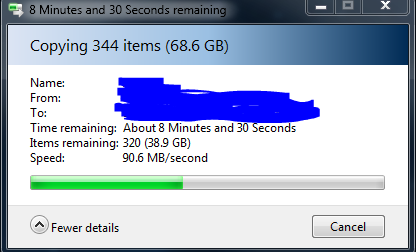