Okay so randomly going to a yard sale I found this Dell Optiplex 755 for $10.

No HDD (for who knows what reason)

Some ATI card I that I still can not identify. Here is a picture of the ATI card and has what looks to be a DVI connector but does no have the usual DVI interface we are used to seeing. 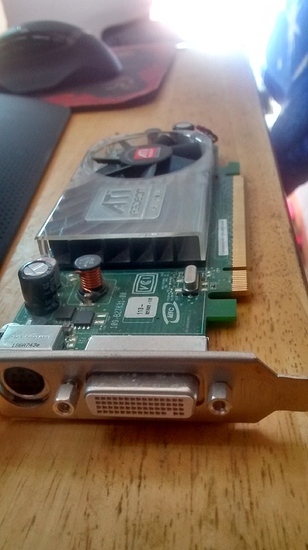 Well what could I do this machine? I ran Mint on it for the hell of it to see if it was still working and no problems, but could not see if the video card is functioning since I don't have proper DVI cable to fit.

oh nice, that sounds like fun, I have been wanting to mess with a hackintosh but have not gotten around to getting parts. Thank you for the suggestion.

You could use it as a retro game machine

add a second nic and load pfsense for a killer firewall, router, gateway.

These old machines are great - just add new hdd (wd blue) or ssd. Run linux. You can pick up ddr2 stick for f*all or in a bin somewhere if need be.

That's an old dual monitor connection.  *googles exact name*  DMS-59.  It uses an adapter that splits off into two connections.  They used them a bit a few years back to keep from having to place two full inputs on the backplate of the video card.  It was a space saver.  I don't remember ever seeing them outside of an office setting though.  Don't think  they were terribly popular in home use...  or at least I never saw any on a home computer.

Yeah it is like SVOD out or something. And like he said, only used in office for people to have dual monitors not to game.

Hope to do some more testing with this little PC when the adapter arrives. I only got into computer back in 2013 so I am very intrigued by older hardware regardless if it runs less efficient.

I also have an extra Core 2 Duo E6550 if anyone wants it. If not I will turn it into a key chain.

another note. i had an old 755 and the cooler was quite loud. i ordered a rosewill off of newegg for like 14 bucks. it was as quiet as a mouse. but when the caps blew on that intel made board, i took the fan and mounted it as an egress fan in a case. it fit perfectly.

How do you turn it into a keychain? I have an old Pentium.

That would be such a waste. You can have a decent HTPC or gaming rig if you OC that.

I took it out of an old pc at a electronics recycling place. It is really old and probably does not work. It is not even dual core.

Well if you have no other use for it go ahead. But it was something a couple of friends did a couple years back where they shaved the PCB to be flush with the TIM and then used a drill bit to create a small hole through it.

Should be a decent little setup, though and ignifigant overclocking is likely out of the question due to the motherboard Dell likely put in there, and what I'm sure is a fairly low powered PSU...  But dump some more ram in her, add a HDD and it should work well for a HTPC/retro or indie gaming setup, a file/media/web server or just a spare low end gaming PC for when friends come over or whatever.

I had an old C2D setup that I gave to my mom years back.  It's running Ubuntu like a champ as her daily driver to this day.  So those outdated setups still have purpose.