Anyone know what the world’s first 3D operating system is/was?

probably an OS you can run 3d programs with

because to me W10 is 2d but its runs 3d programs

First OS with 3D graphics was amigaOS or Geos, first OS with 3d depth may have been IBM warp, amigaOS, or windows, though windows seems kinda late. And the first OS with a 3D environment like a desktop cube is probably a linux of some sort.

on microcomputers, maybe. They did 3D on mainframes for a long time before that.

I don’t count mainframes. Its not accessible to the average user.

The only criteria we had was OS, not where it runs.

True. CP\M might be in the lineup in there somewhere too.

To get back on topic, the only 3D “user” UI that comes to mind is:

File System Navigator (fsn; pronounced "fusion") is an experimental application to view a file system in 3D, made by SGI for IRIX systems. Even though it was never developed to a fully functional file manager, it gained some fame after appearing in the movie Jurassic Park in 1993. In a scene in the film, the character Lex Murphy, played by Ariana Richards, finds a computer displaying the interface. She exclaims "It's a UNIX system! I know this!" and proceeds to restart the building's access c... 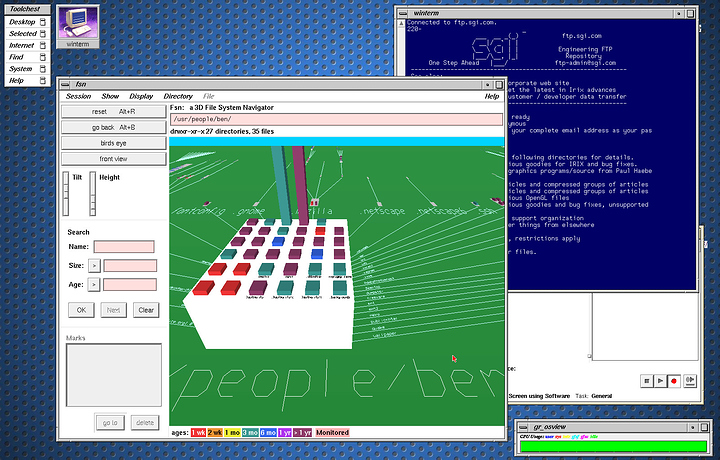 It’s the one they used in Jurassic Park.

It’s a UNIX system, I know it!

The universe didn’t support a third or fourth dimension until Linus added support for them in 1993.

Seriously though, the first graphical user interface to intentionally impliment depth as an aspect of the interface’s design was Project Looking Glass (not to be confused with the unrelated Looking Glass project popularized here on the forums.)

Arguably, others support 3D effects prior to Project Looking Glass. Apple claimed PLG infringed on the intellectual property of NextStep, and it could be said that Windows 3.1 made use of depth because windows could be overlapped. Others have mentioned 3D effects in much older systems.

We can’t really answer until OP defines what they mean by 3D OS. Coz that is not a widely used or accepted term.

This was a neat one.

Bumptop after 2 years in Beta has finally been released to the general public,for the moment it is only available for PC's running Windows XP, Vista or

There were a few alternative 3d UIs for windows and linux. But yeah not entirely sure what the question really means.