Finally routed my cables on my R4

so after having this computer since Feb and just slapping it together to use it I re routed everything today and made it look decent. I tried to make the back look as neat as possible but some cables are just weird lengths and dont like to bend right for me. any other tips for doing anything better next time i do this? or did I do an okay job for just winging it?

And on a side note. Thanks a ton Logan for showing me this case, Fractal kicks ass and this is the best case I have ever had the chance to see or use. its so quiet and extremely heavy duty. 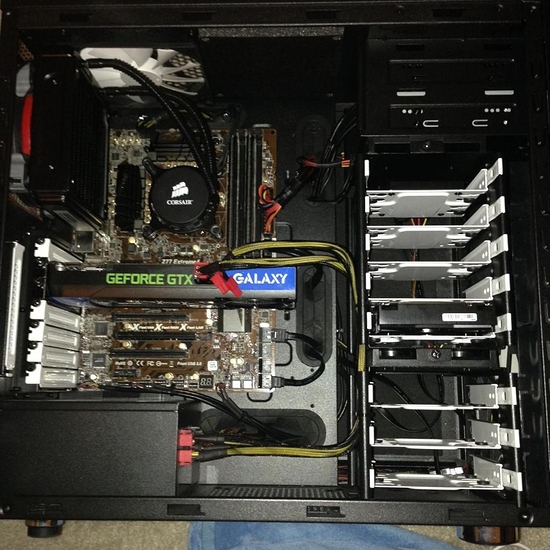 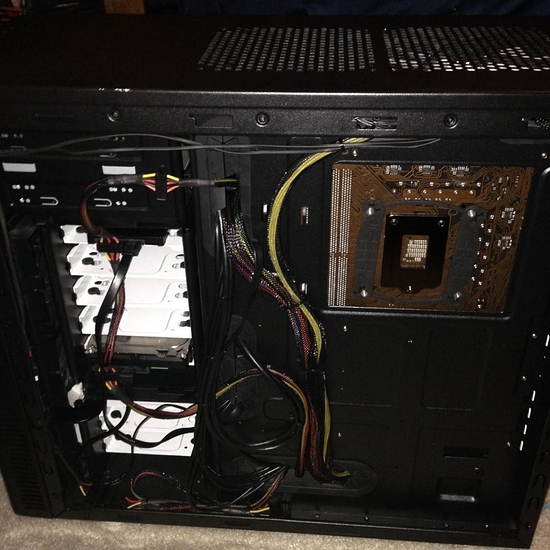 what motherboard is that

okay thanks, didnt even think about that

and yes is it a ASrock extreme4. i love it, does everything i need

Too bad its that ugly ass brown color.

cant do anything about that part lol, luckily my case doesnt have any windows on it.

The cables for the graphics card look really, really bad. I don't know why you didn't route them through the grommets. Same goes for those big ugly cables going from your power supply to directly behind the hard drive trays.

the ones for the graphics card are to short to run through the grommets, that was the first way i tried. maybe i can but some longer ones.

im assuming you mean the sata cables, i dont like how they are either but not sure how to route them unless i get some longer ones. those things arent very flexible at all either.

Though with the R4 if you wanted you could buy a windowed side panel, because they sell them for about $20. =P It's sch a great case. I love mine, I can't even hear the inside.

SATA looks fine to me. I'm just talking about those giant yellow cables, but they might just be the graphics card cables like I already said. I don't understand how they're too short to fit through the grommets. Your path behind the hard drive tray, up the side of the case, and then straight over to the video card seems like a much longer path than just putting them through the grommet next to the power supply and having them emerge from the grommet next to the video card.

What kind of power supply is that btw?

its because the plug on the power supply is high up from the board so when i go down through the grommet and back up the other grommet its about 2 inches short. the yellow cables are the graphics card cables like you said.

and its a rosewill HIVE 650

You know I learned you could put an entire 280mm Radiator in the front and still keep the bottom hard drive bay. All you have to do is move it back to where the first two holes for 140mm would have gone and it gives you just the right amount of space, though if you do that you cannot have a 140mm fan on the bottom but could still fit the 120mm.

If you want I could post some pictures of my rig to compare, since htey are both in R4s, though mine is an AMD rig. I personally think you need a good job though.

This looks great, I have an R4 with the side window on an AMD build and I think your cabling looks pretty good. I also have a Hive 750 and the cables they come with are just really stiff and with the size of this case I often find they're too short as well. If you do get the window panel it does cover the hard drive bays so you won't see them as much. I agree on removing the top drive cage it really does help airflow and I prefer to populate both front fan slots if you have enough fans. Is the top an exhaust? I found that I got more positive pressure if I put mine in the bottom slot which helps prevent dust from entering the case through cracks and the bottom slot is filtered so that helps as well.