Congratulations everyone. I learned a lot, but what I really learned is just how much I will need to step up my game next time.

I have some old hardware to give away, …

Oh, that’s fine, you can do a lot with something like a Nehalem i7 still… I’m just glad someone liked my project.

Thanks so much for including me in the finalists.
I’ve already had a great time participating in this devember, and this just fills me with warm and fuzzy emotions.

If you’re a finalist, what sort of prize would you like?

I’ve been thinking for a while of building a mid-tier/value linux gaming PC, but the prices of GPUs in particular have been really discouraging.
I would appreciate any kind of mid-tier hardware that I could use in such build.
If a hardware prize turns out to be out of my reach, I could also use some linode credits.

Not a finalist but still included in the post which is awesome. Lots of great projects!

Devember motivated me to not only write my software for myself but actually document it properly and provide packages so everyone can use it. I’ll make sure to participate again next year!

I’m happy my hard work has been noticed and given a nice honorable mention. Thank you judges and all participants.

There are so many good projects and it’s hard to read them all.

I scraped links I could find from projects. Sometimes projects are easier to learn about by playing around with. Mine definitely is.

Welp, was not expecting to be a finalist, or noticed, so queue anxiety attack of success!

It was fun participating with everyone and trying something new and writing about my design decisions and the why behind them.

uuuuh prizes I’m interested in? (ordered from most practical to most insane)
*an ok wired mechanical keyboard with backlight
*an ok 1080p monitor
*a graphics card that’s better then my current GTX 650ti w/ 1 GB VRAM would be nice, but not too modern/powerful, as I don’t think my decade old motherboard and CPU comprehends modern tech (it won’t POST if the hardware is too new)
*uh… a half hour talk with a CPU designing information computer scientist-researcher-ologist to ask some questions about CPUs and computer science theories question mark?

Honestly, a prize is nice, but if not possible, a virtual high-five is just as good =P

*uh… a half hour talk with a CPU designing information computer scientist-researcher-ologist to ask some questions about CPUs and computer science theories question mark?

I haven’t put the finishing touches or cleaned it yet so mind the mess, this will sure to melt the face of a certain cat 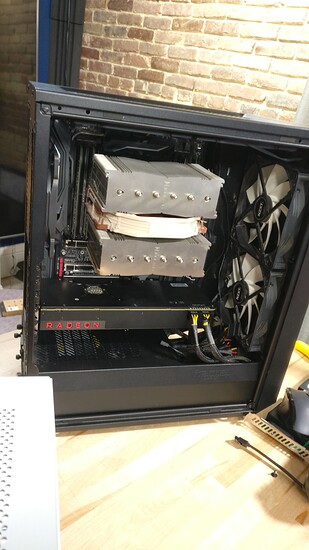 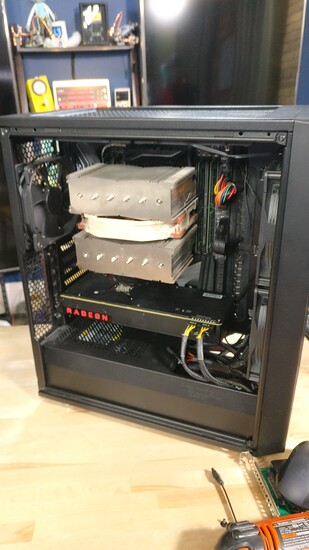 Thank you @sprouts87 and @Techisattva

what prizes did everyone end up getting?

only a few have let me know what they would have SO PLEASE DO THAT!

I also messaged everyone for shipping addresses. The big prizes were sent last week we should hear from them soon with pics I hope

how about a thecus J1900 celeron based NAS? It has hdmi out and can be used as a PC, some 3.5" bays and is 1 gigabit. It wont set the world on fire, but it is decent. It currently runs windows but windows 2012r2 so I’ll probably wipe that and install truenas instead before sending

…Oh, I’ve just been here waiting for a prize pool to go up like last year.

I feel bad just asking ‘Hey, can I have X’ without knowing what you’re looking to get rid of, but if that’s what you want.

Can you sort the motherboards you’re willing to get rid of by number of PCIe lanes available? I’m game for whatever’s left over at the top of that.

My SuperMicro X8DT3-LN4F NAS blew a socket out and so my network storage is propped up with an ex-IKEA cash register right now, so literally anything would be an upgrade at this point.

…Oh, I’ve just been here waiting for a prize pool to go up like last year.

I feel bad just asking ‘Hey, can I have X’ without knowing what you’re looking to get rid of,

2nd this, was a little lost on what was going on with prizes.

Probably the most useful / practical would be Linode credits.

Not sure what is available for hardware …or what would even be compatible with my ancient machines.

This is what we have so far. Not pictured is an older thecus Nas that I think is spoken for 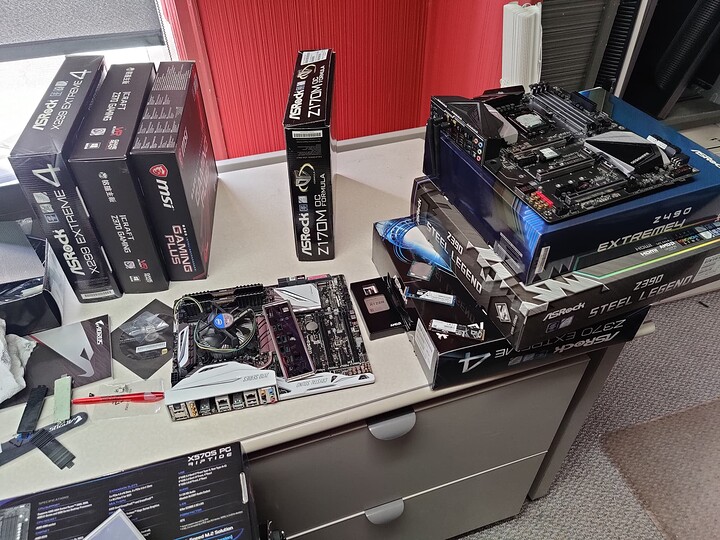 If that was directed at me, don’t worry too much about it unless you have something specific in mind (if not directed at me, carry on) - any of those boards with a display output would be fine to stick a NIC and the RAID card in and call it a day. If no server board turns up and nobody’s claimed it, that Z370 Extreme4 would do the job nicely and will be my choice, but I’ll wait to hear back first.

@wendell Does that mean that some of us finalists are no longer finalists then? I’ve been checking daily but have no messages.

This would be awesome. Time to prepare for some videos on Cloudstack for dummies

Thanks again @wendell and the crew for Devember this year. 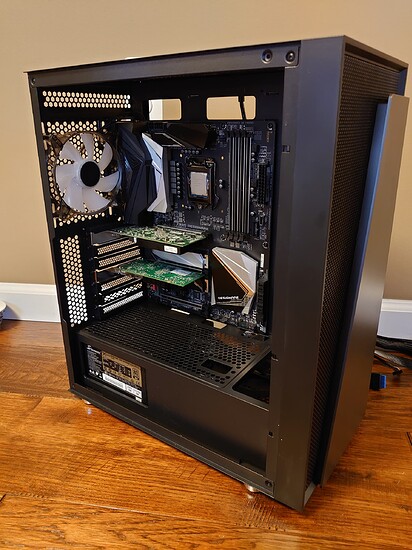 Was originally going to stick whatever I got in the 2U SuperServer chassis, but this thing is just too nice to stick in the rack in the basement. Guess nobody claimed the Z390 Designare, wanted to leave it for someone who needed a new PC but it’s going to make an awesome little workstation. Will have to hunt down a cooler, some RAM, and maybe something to complement the the pants-shitting power of the R5-340X.

Got your M.2 standoff and heatsink reunited with the motherboard, ya really went to town on that thing

Have been learning how to set up and deal with MediaWiki lately, which I’ve decided on for documentation of the project going forward. Really like what I’ve got so far, should make for an interesting post over on the ‘Knowledge Repository’ thread once I actually get everything ironed out.

I’d like to get everything hosted again on this little Core2 Duo cash register I’ve got, but am currently trying to find a way to automate keeping my domain pointed to my residential IP address whenever it changes since it’s obviously not static.

@NorthernWing if you can spare it, 5 bucks a month for basic Linode server would keep the domain pointed, and not need to be affected by IP address changes. You would be talking to that server instead of an DNS server. As a bonus you can use it for various other tasks (like testing if you are still connected to the internet, etc), or as a “bounce server” (reverse proxy), and VPN (thats all pretty lite for a single core 1Gb vmachine).

(looking forward to your update btw)

It has arrived! and i have done some configuration of the NAS but I think it will be reset once I start my adventure to create a budget AWS at home.

Hi Forum. This thread will document my journey in creating a DIY/Budget AWS at home using Apache Cloudstack, XCP-ng, and my prize from the December contest. [image] (Disks not included) This first post is to get me started thinking about the project and I will be sharing my design ideas and other concepts that the community can follow and pl…