I have just encounter this weird issue where Fedora refuses to boot up. I'm able to successfully install Fedora however, as soon as I log into my user, the system would just simply freeze up. I'm observed no error code prior to this happening. How do I fix this issue? Thanks in advance.

How long did you leave it to freeze up? Is it the default gnome DE? what graphics is your system using? did you try logging into the alternative gnome environment? (i think its gnome failsafe or gnome classic.)

At login press Ctrl+Alt+F2 this will take you to a console tty.

You can check Xorg for graphic driver errors

Also while your at it update the system, theres a good few updates from the released install disk to whats out now.

I just wiped my Linux SSD drive, so I'll need a bit of time before I can post more. I did leave the system like 15 minutes and it just shows nothing other than the gray desktop with my mouse cursor stuck on it. I'm using the default Gnome desktop like environment but it does not allow me to change other environments at the login screen.

I have managed to check the boot log and compiled screenshot of the errors. 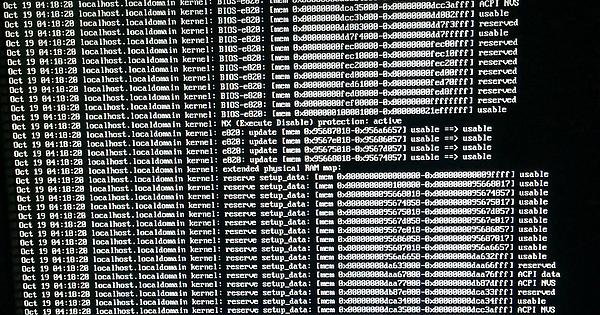 I will proceed to test graphic driver errors later. Oh and a little note here is that I ran Ubuntu Gnome prior installing Fedora and it works fine, it's just that I want to try things out.

EDIT: I have attempted to run cat /var/log/Xorg.0.log | grep EE but it shows directory not found. Currently installing the updates. It appears that the GUI will crash the system for some reason.

This is quite curious. Can you please do

and get me that file please? If you need assistance doing that just say and I'll write out some instructions. What this is is all the messages the kernel gives while booting, so if there's something strange happening while booting I'll be able to find it (fingers crossed?). I'd get you to grep for certain things but I have no clue what'd do this, it's quite strange

Alright, I'll do so as soon as possible. Currently out away from my Linux machine.

Strangely, it doesn't show anything! Welp, I guess I'm changing to CentOS.

Looks like a kernel error or an FS erorr. As for BGRT. It is nothing serious.

BGRT - The Boot Graphics Resource Table (BGRT) is an optional table that
provides a mechanism to indicate that an image was drawn on the screen
during boot, and some information about the image.

The table is written when the image is drawn on the screen. This should
be done after it is expected that any firmware components that may write
to the screen are done doing so and it is known that the image is the
only thing on the screen. If the boot path is interrupted (e.g. by a key
press), the valid bit within the status field should be changed to 0 to
indicate to the OS that the current image is invalidated.

This table is only supported on UEFI systems.

By chance are you using BTRFS?

By chance are you using BTRFS?

I don't think I chose BTRFS...

Oh and do help me out a bit on this topic
https://forum.teksyndicate.com/t/good-laptop-backpack-for-usd-200/89761?u=razorlr1

I thought that Device-dev-disk error in the 7th picture was something but it turns out to be nothing.

That is why I was asking if you used BTRFS, because some guys using Arch Linux where experiencing the same thing but with BTRFS. But it does not matter what file system you use because the error seems to pop up for all of them.

So this is obviously a kernel error.

By the way you are using ext4.