Fastest Mobile GPU as of yet, Mali-T658 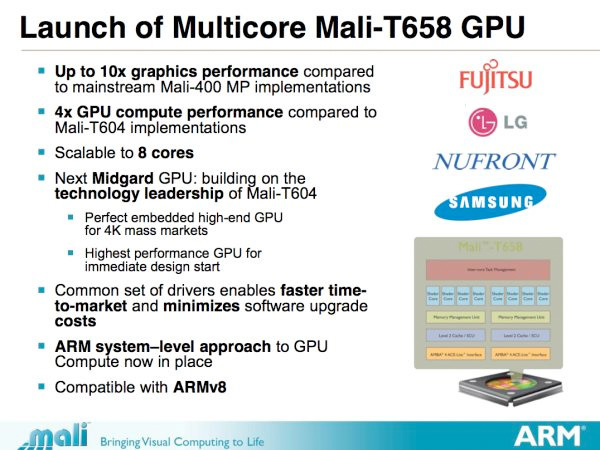 With mobile GPUs advancing this fast, at some point they will probably start to overlap some of the lower end desktop GPUs and become profitable to market as an alternative to AMD Nvidia and VIA S3, since the GPU would not be processor architecture dependant it could work with X86 desktop CPUs.

I dont understand, why we dont just take like... dunno 8 of these and make 1 cpu. They are very small, and really fast nowadays.

Also, if this makes into androids I will buy it, break it and make some of the sloppest coding ever. Just cause I can.

as for CPUs, because it wouldnt be X86 or X86_64 and would be incapable of running windows programs, and only AMD, Intel, VIA have a liscense to x86, but Elbrus and Loongsan also make X86 cpus by running code in real time emulation

but as for the T658 GPU, thats not a bad idea as it could be done, its already core per core 50% more powerful than a nvidia ARM GPU core which is nearly identical in architecture to the nvidia mobile laptop GPUs, and without power restrictions present in a tablet or phone you could make a 64 or 128 core mali cpu for desktops or laptops that would be pretty good