I have an Unraid server that I’ve been running for some time. Generally speaking, it works pretty well. It streams Plex without any hiccups, and generally behaves itself when dealing with smaller files like word docs, pdfs, and images.

I recently, however, tried to migrate larger files (1-3gb mkvs) to a thumb drive for vacation viewing (no internet access at destination), and struggled to copy anything faster than 5mb/s. Things got worse when I tried to copy several at the same time. I tried troubleshooting and different modalities of copy (direct to USB via Commander, Krusader, and Windows via rootshare to USB) and everything choked and was essentially unusable. The USB drive was USB 3.0 and on the correct ports, so that doesn’t seem to be the issue. I have tried to get answers over at the Unraid forums but they’ve been hit or miss. My server is hardwired at 1gbs, so I don’t think that’s the issue either. I am aware Unraid has been known to have slow reads, but that seems pretty excessive.

Any help is greatly appreciated. I’m not sure what information would be helpful here, but am happy to provide any screenshots or diagnostics that might be of value. I’d really like Unraid to handle these transfers faster.

The USB drive was USB 3.0 and on the correct ports, so that doesn’t seem to be the issue.

This is actually likely the issue. (Most) USB’s do not operate at their advertised speeds consecutively, only burst-y.

There is an internal cache of a few gigabytes inside most USB drives, once that gets full then you are flushing to disk at its actual write throughput.

Data is written first to the cache, and then committed to the flash storage.

For example, if you stop the transfer, then start it back up again does the speed start out fast and then slow to a crawl?

Speeds were essentially consistent at 5mb/s.

Just to clarify, mb/s as in megabits and not MB/s as in MegaBytes

mb/s, yes. Sorry. I may have a USB to SATA adapter I could try.

Do the reads to non-USB thumb drive are at 5MB/s too? If not → blame USB drive

I’ll give that a shot. Would a USB myPassport drive be a fair testing agent?

I’ll give that a shot. Would a USB myPassport drive be a fair testing agent?

Test anything non-USB (PC to PC or whatever)

I don’t know what a “mypassport” drive is. Some U2F/FIDO?

I’m sure I’ve missed something, but did you try copying to a client running Windows/Linux, then copy from there?

WD MyPassport is an external drive.

Honestly they can test something with the USB interface, but, something other than a regular flash drive. Like an external SSD, would suffice. If his variant of MyPassport is an actual SSD then it would be a much better test to rule out if its just an issue with their aforementioned flashdrive.

It was my understanding that that’s essentially what happens when you copy from rootdrive.

Here’s a little testing I have done thus far with a 1.4gb test file:

This seems to indicate the culprit was in fact the USB stick, which was brand new. Per the manufacturer, “Please be informed that the Data Transfer Rate of the TEAMGROUP C186 128GB is up to 100MB/s”. I’m running a test on it now to see if it’s bad.

Anything else I should look at?

To be fair, it could also just be a bad unit.

Unlikely. USB sticks are generally of the worst quality. I spent too much time of my life telling people not to fall for advertised speeds. I had some hopes after USB 2.0 drives slowly went out of the market, but most manufacturers just changed the USB standard to advertise 100MB/s while the chips remain basically the same.

To be fair, it could also just be a bad unit.

I am not familiar with TeamGroup outside of their RAM.

Anything else I should look at?

That way you should be able to figure out how big your cache size is on the flash drive.

If you see awful performance on something as small as a 100 MiB file then yeah that flash drive is either defective or is a bad product. 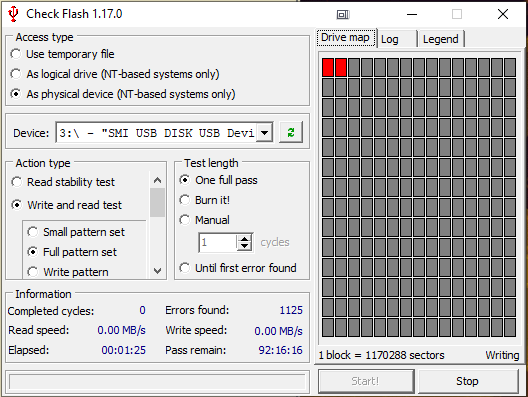 Nice one, glad you found the issue