I recently purchased a EWS1200-28TFP switch and two EWS357AP access points. I connected the WAPs to the switch and it powered both WAPs fine and the WiFi was working fine as well. The following morning I woke up and noticed the WiFi network was no longer active and I checked both WAPs and they were both powered off.

I did not change any settings in the switch but cannot get the WAPs to turn on again via PoE. When connecting a DC 12V power adapter to the WAP it powers on and connects to the network and works just fine but without it, it won’t turn on.

I tried resetting both the switch and WAP(s) to factory settings but still they aren’t being powered by the switch. The switch PoE settings are defaults and no matter what port the WAP is plugged into, the switch just lists the port as “Searching”. 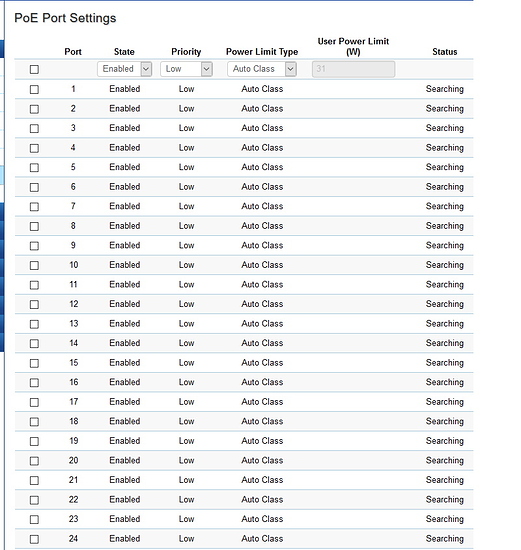 Any ideas on why that might be / how to fix it?

I should note, these are Engenius products (both swtich and WAPs)

anything in the switch event log? I had this when I went over budget but then unplugging the rogue device fixed it up.

The budget @wendell means is power budget: if the APs need more power then the PoE switch can provide, it’ll shut them down. Look in the settings of the switch if you can adjust the amount of power each port can deliver. Another thing is TTL, time to live. If a device isn’t used, it could be powered down to save energy. Consider setting the priority for the APs to medium or high.

Thanks I tried setting the ports to the WAPs were plugged in to High but still no dice. It’s not a power budget issue either as the switch has 410 watts budget and the two WAPs are the only PoE devices connected (similary the PoE buget page shows a budget setting field 0-410 (set to 410) and power consumed: 0.

The switch event log is gone now since I tried a factory reset. But when I looked into the logs before it just showed it coming online when I plugged it in day 1 and then in the middle of the night it had another entry that just listed “offline”. no errors or anything, just it going offline and never coming back on.

I’ll check into if I can find TTL settings for PoE stuff in the switch and report back if that makes it turn on. The trusted device thing seems unlikely since when both the switch and WAP were reset to factory settings I would expect it to just power the WAP again like it did the first time I plugged it in.

Could not find any port TTL or PoE TTL settings anywhere in the switch.
I disabled all PoE ports except for the ones I was testing with, setting them to:

Status keeps sitting at “Searching” and the WAP doesn’t turn on. Also the 31W per port limit is plenty as the WAPs specify DC 12v 1.5 Amps i.e. 18 watts max consumption.

Odd. Check wiring is still OK, are you sure the settings in the WAPs are (still) set for PoE power? If that doesn’t yield a solution, consider RMA for the entire set as they’re still under warranty.

Yeah I think that’s where I’m at now… There aren’t any settings in the WAP to be used over PoE or not, so it’s just really odd that the switch isn’t powering anything. Checked the wiring too, even cut some new cables to test, no dice

So I got the replacement switch, set it up, plugged the WAPs in and they turned right on. Woo!

Thinking I had success I moved the switch into position and plugged everything else into it. Aaaan the WAPs turned right off again. So one by one ethernet cable I unplugged things from the switch and suddenly they come back online. The cable in question ran upstairs into my office where it terminates into a keystone and from there I connect my desktop with a regular patch cable.

I decided to test every part of that chain:

So basically, somehow… I don’t know how, but the ethernet jack in my Asus x470 Prime Pro kills PoE functionality on my switch when it is connected. I plugged in a USB3-Ethernet adapter and connected my PC that way, no problem, the WAPs stay on.

The reason I didn’t discover that earlier was simply that I used the desktop to test the configurations of the switch, so it was the one thing never disconnected from the switch.

This is not the first issue I’ve had with this motherboard. The USB is flaky too and gets random disconnects every so often. I basically have to “re-setup” my Rift S every few weeks because even though it’s connected, the Oculus app says it isn’t. fun stuff.

But yeah this is the epic conclusion of my PoE woes. This feels like debugging your code for hours and realizing a missing semi-colon is the culprit. It just feels dumb

I wanted to say thanks for all the tips and help!

No I just gotta figure out how to configure the two WAPs to act as a mesh, my phone keeps bouncing from one to the next every so often and it’s a bit annoying

Glad you got it sorted, even if the culprit wasn’t the switch/AP set.

haha yeah, but a connected device’s ethernet port… not even a PoE device… very strange