I’m going to @wendell on this one because I know he is a fan of exhaust radiators,

The case is fully populated with cooler master silencio fans which are all pwm.
3x front, 1x rear, 4x in roof push pull radiator.
I’m using the masterliquid 240 (not the lite one)
and I use cryonaught compound.

I have no really bad issues but recently i’ve been folding overnight on both my rigs and i’m noticing the build listed has a lot of top panel heat soak, I don’t think the air is escaping as well as some cases but it all seems to be flowing as it should. I can feel the cold air being pulled in at the front. I can feel the hot air at the rear and through the roof vents.

The air coming from the p300 build is warm after 8 hours folding
whereas the evolve m build has hot air over the same period.

I’m just wondering if this is just how this case is or if I can make some gains by moving the rad to the front. Seems a pointless effort if i’m only going to have to get a better flowing case anyway, which is why i’m asking.

I’ve heard about modded front panels and laser cut ones etc but i’m not messing around with all that, plus I think the fault is with exhaust not intake. 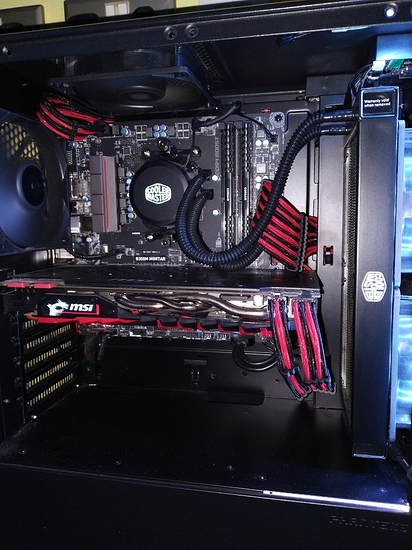 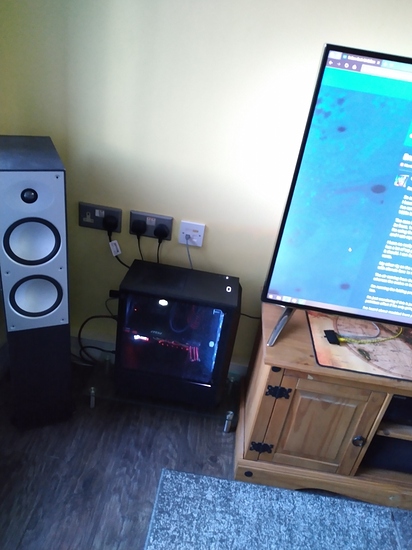 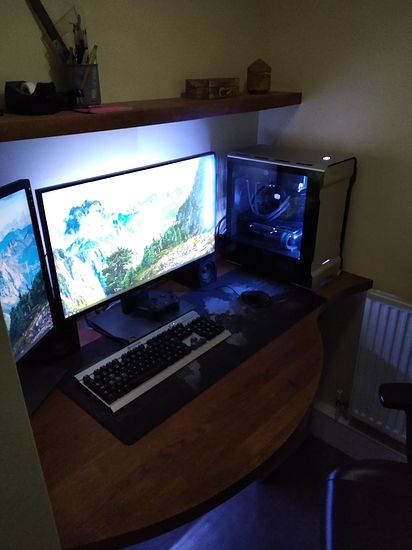 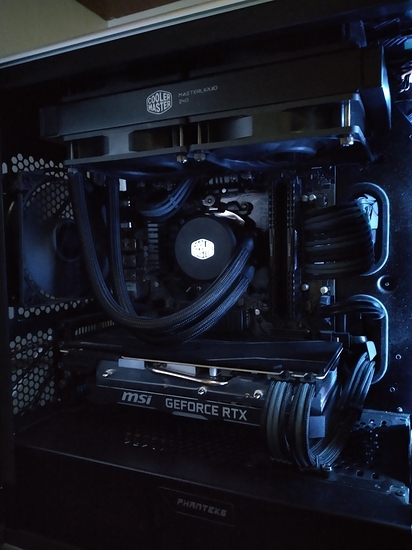 So yeah. The silver grey one is getting warm. Possibly because its sucking the hot air from the gpu through the rad?
The red black build runs cool and well

no as listed every fan I own is a cooler master silencio 4 pin pwm fan. On both rigs.
Theyre static pressure fans and ive never had an issue.
Plus because I have same fans in each case surely it kinda rules it out

I have 3x intake up the front. i’m not sure where youre coming from with that so its 3x in 3x out on the system

literally cant see those fans in any photo

skimmed posts looked at photos, how restrictive is the front panel on that case?

I don’t think its bad to be honest.
I believe the issue to be more top panel exhaust.
My biggest question is would I solve the problem by moving the rad to the front.

To be clear the system is not overheating I just think its not running optimally in terms of coolant temps.

Try flipping that one fan, just to sate my guess. You have push pull up top (going to move a good amount of air) and 3 restrictive intakes and 1 easy flow rear fan.

While fan numbers are kind of even, the flow is not.

I started looking into reconfiguring etc. ive had the top panel off and sealed up the excess mounting spaces etc as I thought I might have an air loop in the case.
It made no difference.
So before I start tearing into my workstation 2 or 3 times to test different configs I thought it better to ask on here where I know a lot of smart guys and pcmr wizards hang out.
Bear in mind this isn’t just a pleasure machine so if I end up with downtime because of some stupid issue from messing about it will be an issue.

That’s why I suggest trying to remove some paneling before starting unscrewing and remounting fans…
Try and remove the front metal plate. Not the entire panel, just the metal plate to give it more breathability. Then remove the top plating to open the air path of the exhaust. If I am not mistaken you don’t even have to turn your PC off to remove them.
I could be wrong, since you have pretty good fan power over there, so maybe they overpower the restrictions, but knowing what happens when I remove the dust filter from my front panel, your front metal plate is, I’m guessing, at least a little bit restrictive.

yes psycho you are right I can pop the front off and theres a single screw for the top and it slides locks to come off.

However. stripping 2 panels off the case to me means im not using the case. If I cant calm it down a bit as a complete unit then its not really a solution.

Ok, let’s take that from a different angle…

It doesn’t fix anything, yes, but it will show you where the issue is.
If pulling the front panel drops the thermals massively it means your case is struggling for fresh air. At that point you can turn your rear exhaust into rear intake. Get some fresh air in. If it doesn’t make any serious difference then the intake is not a problem.

stripping 2 panels off the case to me means im not using the case.

The goal is not to mod the case, but to find the problem. Does the intake fans struggle or do they overcome the restrictions? Is the roof preventing hit air to escape, or are the rad fans pushing it well enough. It’s about finding the problem area, preferably without ever turning the PC off…

I honestly don’t think for a second that the issue is intake.
The issue is heat soak in the top of the case. the top panel gets quite warm as the air directly hits it and it only has rear and small vent holes.

As it happens I do have a small update on this.
I have all my fans set to read cpu temps in pwm mode.
I have calmed down my fan rpm in the middle of the curve as I actually never get into top speed. so the temps im at I was running 70% duty.
this has actually not made any difference to the cpu temps but it seems to be better in terms of overall case flow.
I have also moved the rear fan to the top of its slots to try move any stagnant hot air in the vrm area.
Maybe I was a little hot on the fan rpm for the available flow on this case?
ill keep monitoring and updating