I got a free Dell OptiPlex 7040 SFF system. It’s got a pretty good 6th gen Core i5 CPU and I’d like to use it as a pfSense router, but it only has one ethernet port.

So far I have found this: 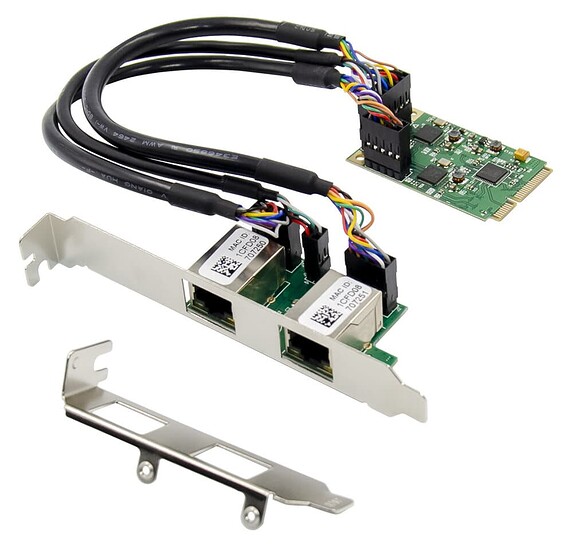 I’d prefer 4 ports but can live with 2. Problem is how to mount it… There is no expansion bay in the OptiPlex’s case and nothing obvious to screw it to. Maybe I could 3D print an enclosure but the cable dangling out the back isn’t great. Maybe I could adhesive it to the case somehow.

Then there’s this sort of thing: 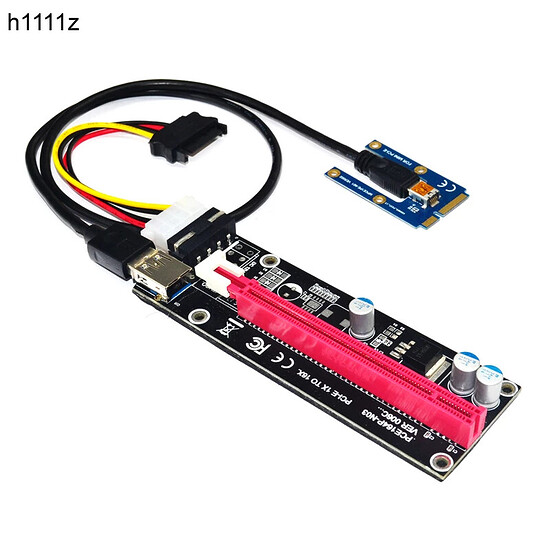 Will it work without the power cable (unit has no internal power cables)? I could maybe 3D print an enclosure, couldn’t find any for sale except massive ones for GPUs. A quad gigabit NIC is only PCI-E x4, not x16.

Edit: I just realized that the cheap ones like this are only PCI-E x1. The USB Mini connector only has 2 data lines.

Found some useful info here: Adding a second NIC to a 5th Gen Intel NUC (Or other PCIe Cards) | virten.net

Apparently M.2 only supplies 3.3V, and many PCI-E cards need 12V. Chances are a quad gigabit NIC needs 12V, so an external PSU is required.

Plan C, get a single port gigabit card and bodge it somehow, and then use a switch with VLAN support. 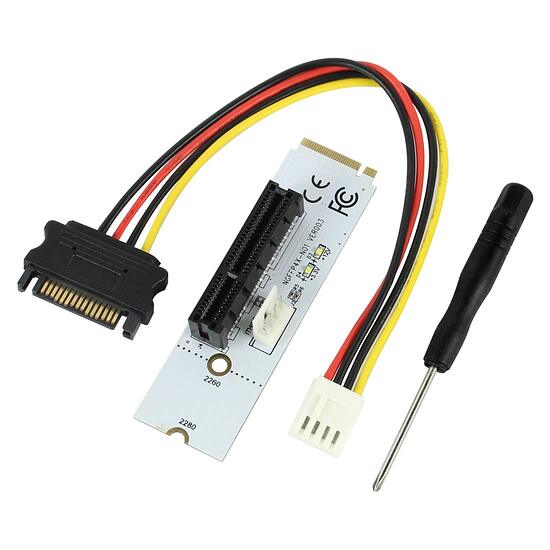 that is x4. the one you posted is x1 lanes, typically used for mining. either way you will need to power them, somehow.

are you trying to use the m.2 storage slot, or the m.2 wifi slot? If the wifi slot note that its A+E keyed so not all adapters work in it. 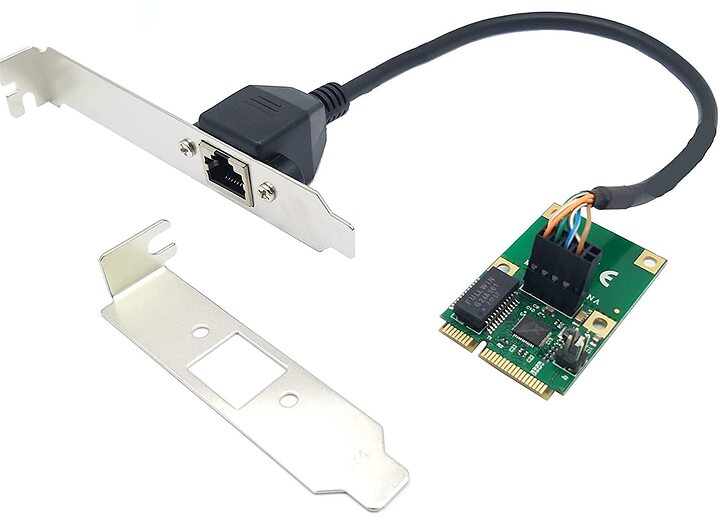 I have this one.

infinitevalence, are you happy with it? What did you mount it in?

It seems like an odd device. If you have an expansion slot you probably have a PCI-E slot right next to it… 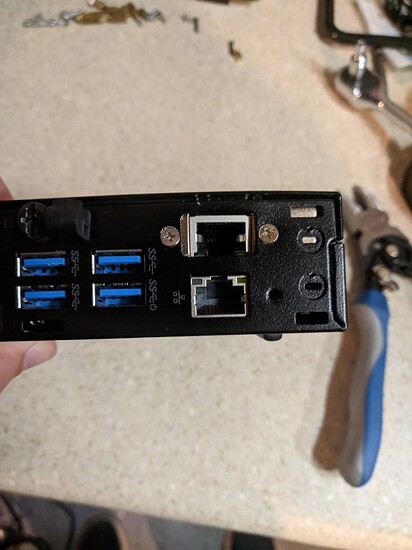 Its going into my 1L Dell 3080 as a router. ATM though I have a realtec version of the same formfactor installed and since its in PROD at home I have not updated it until I can do so without disrupting the whole families network.

Currently running PFSense which is working fine with the Realtec, but thinking about swapping over to OpenSense which is why I wanted the Intel chip.

That’s interesting, my Dell is quite similar and has a cut-out for VGA. I was wondering if I could bodge it into there somehow, but wasn’t sure that the RJ45 socket would be usable.

You can I did

FWIW I’m running a USB 3.0 nic as my wan interface - using Debian, not a typical router distro, it works fine.

I think PCIe would have lower latency, but this is on my wan link - USB overhead is negligible.

You can I did

How did you get the screws in there? Mine doesn’t have holes for the VGA connector retaining bolts, it has cut-outs. So I was thinking of cutting down the bracket that comes with the RJ45 assembly and drilling holes for bolts in it, and then using washers on the other side.

FWIW I’m running a USB 3.0 nic as my wan interface - using Debian, not a typical router distro, it works fine.

I think PCIe would have lower latency, but this is on my wan link - USB overhead is negligible.

Interesting. My internet connection is 1000/1000 and from what I’ve read there are issues with pfSense and USB dongles, but it could be worth a try. Maybe I could use it for secondary connections like an IoT only network, or a wireless dongle.

Again people say don’t use pfSense for WiFi, but it’s cheap and easy… Other option is a used AP off eBay.

Only thing I noticed with the USB3 adapter was, on my N3150 (about 5year old pentium/atom low power 2GHz CPU) I wasn’t able to get iperf3 --bidi without setting smp_affinity with traffic shaping for my onboard pcie nic and and without setting cpu_scaling to performance.

Basically both my onboard realtek and usb3 controllers only have a single interrupt queue.

But I only have 1000/50 and I didn’t have to make the settings permanent… if you run into issues, you may want to have a look at interrupt masks.

more or less thats exactly what I did. I cut down the included bracket, drilled some holes in it and use the VGA standoff holes as the mounts.

I had to cut away the top of the case because the shielding on the connector was hitting it which I was lazy and did with snips. I should have pulled the whole thing apart and done it with my rotary tool to get a cleaner cut.

But im the only one who sees it or knows, so yeah… lazy moment.

I managed to get a gigabit card in there. I recycled an old router into a managed switch and wi-fi AP, so I can use VLANs. 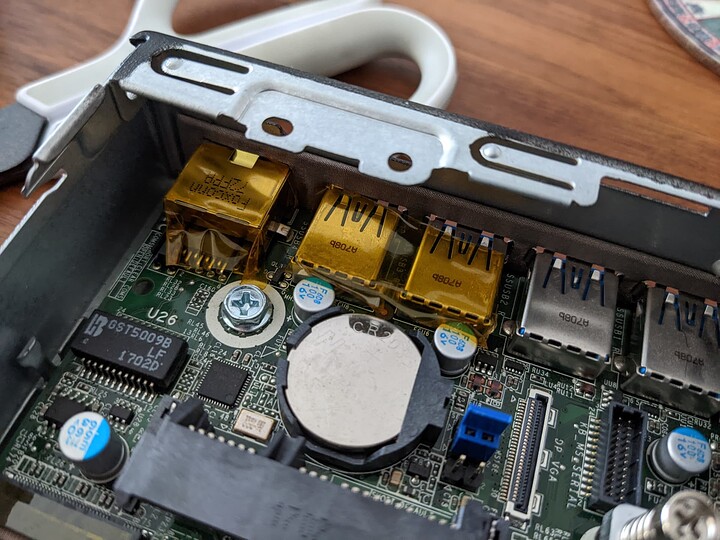 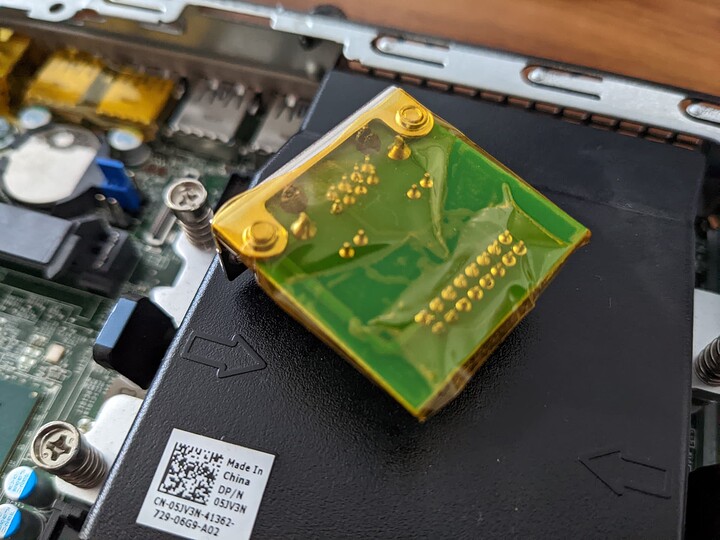 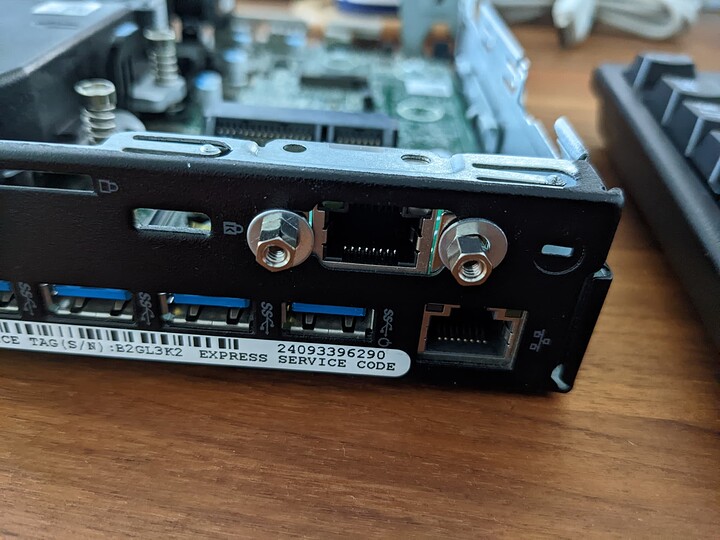 Not quite factory fit but it works! 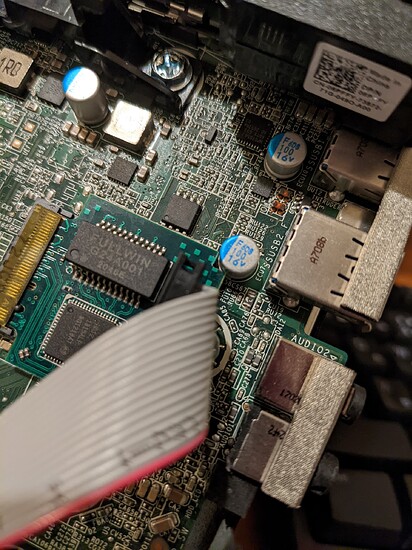 Had to take a small chunk out of the corner of the card because Dell put a capacitor in the way.

is that a M.2 A+E key intel adapter? where did you find it? Every time I try to order one they either send me a mini PCI, or if its M.2 A+E they send Realtec.

Yes I think it is A+E key. That socket is an A.

Side note, the screws supplied with the Dell are complete rubbish and too large for every card, including the original one that was in there. I ended up using a #6-32 UNC screw (the larger type used in computer cases) that is only partly inserted.