I had Windows 8.1 and 10 dual booting. Decided to delete 10 and stick Ubuntu on instead. So I got Ubuntu installed but I've destroyed my Windows boot system partition in the process (format destroyed). 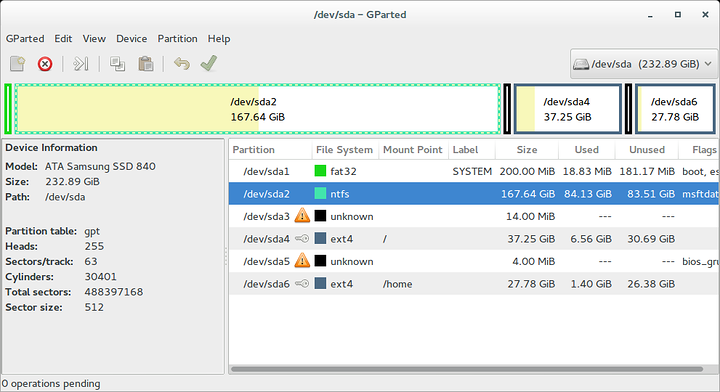 sda1 was where the Windows system was located.
sda2 is my Windows OS.
sda3 was a swap file. Not sure what happened to that.
sda4 is root - Linux OS.
sda5 was the grub partition.
sda6 is the Linux home drive.

I believe I've somehow converted the disk from a MBR partition table to GPT (don't ask how :P, involved trying to install OpenSuse which failed).

Since then I've formated sda1 and tried to rebuild the BCD partition for windows using this guide.

While it ran successfully (it was the first thing that didn't fail), I've still had no luck in booting to Windows.

I am constantly getting error 0xc000000e. Cannot find file /Boot/BCD.

Anyone have an idea of how to fix this?

It was saying no installation found and device is locked. Basically none of the system repair tools worked. I will go back and try it now that I have recreated the BCD file. Although it still says its missing when I try to boot.

If you're getting no boot-able device, check your bios. I've had that happen a few times and needed to muck with settings to have both play nice.

I unfortunately had the same problem. The boot repair disc will not fix your issue. You will have to flash an image back onto the drive or reinstall windows fresh. I tried going in through CMD on the disk and running the /bootrec commands and rebuilding the BCD from scratch and it was still borked. I just fresh installed and use UEFI/BIOS to choose what disk i boot into.

I think you are right. Might as well just go through it. Do it properly from the start this time.

I know the OP found their way, but this is for anyone that has encountered the same issue.

This is a remedy for "Drive where windows is installed is locked" when you're attempting to repair your non-bootable Windows.

Assuming your Windows partition is still there...Try this!

There is no reason to re-image your drive as this is exactly like losing your boot partition in Linux. You recreate your folder, mount point, and direct your fstab. Windows operates (at a high level) the same way! So essentially, you're accessing the old boot partition, creating folders, and mapping your Windows OS to that folder to be able to boot. I used this method to recover Windows 10.

@thewalnut
Tried this but it was one of the methods that didn't work.