Just for fun, I set up a Stripe (RAID0) with my x8 WD Red 14TB drives, each drive does about 210MB/s. Now am i going mad, or should I be getting far better speeds? 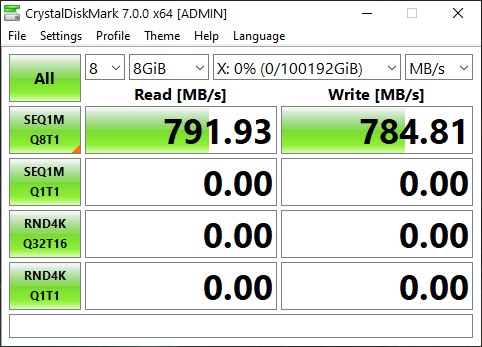 Why does it have a BSD label and you’re posting a screenshot of a windows tool?

(Yes, 8 drives should be faster, but I wouldn’t be hesitant to blame windows or crystal disk mark in your screenshot above, … that’s about 10ms per write, it’s as if it’s syncing sequential writes and I’m not sure it’s going the drive enough data to let it buffer in the drive which would give the drive a chance to reorganize).

I am testing the Striped pool over a 10GB network via a Windows share.

Any idea how i can test the pool speed directly on FreeNas?

Ah, I thought it was locally, it looks like you’re hitting the 10G network limit, that’s like 8Gbps/s.

You can try iperf3 to test your network independently from disks. (Do you happen to be using jumbo frames?)

Or you can try ssh-ing into your bsd box and doing a simple time dd if=/dev/urandom of=/data/some/dir/filename.tmp bs=1M count=8129 … this will do 8 thousand 1M writes of random data into that .tmp file and will tell you how long it took.