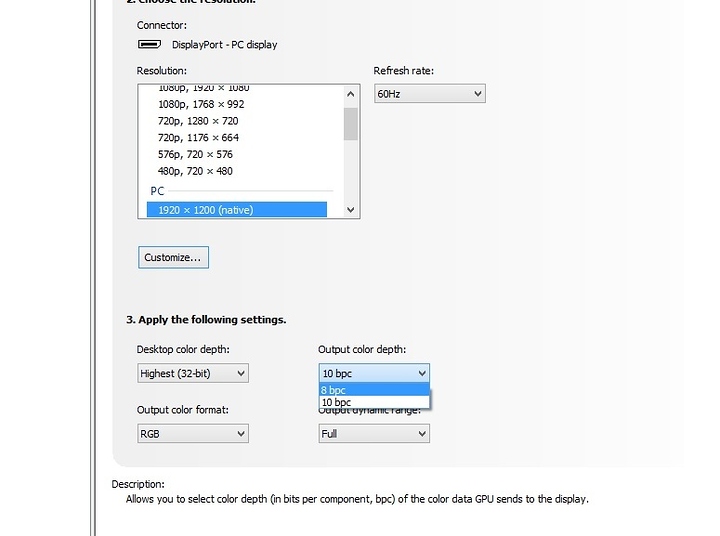 it should support (actually since 7970's they all supported 10bit, but there was no applications that would work except Photoshop maybe, so 10bit was locked down. -- unless nv blocked 10bit unless you use quadro)

I didn't know cards were limited. If you're screen supports 10bit I thought the formula was screen resolution * bits per component * 3 * V frequency must be less than max bandwidth (1.3 display port being the highest desktop bandwidth currently). That formula dictates the limits of how many colors can be sent. The drivers control whether the selection is available based on your other choices if the limits were exceeded for the configuration. This can be confirmed in the driver view by changing to DVI which can't drive the same levels.

4K @ 120hz with 10bit color exceeds DP 1.3 maximum bandwidth. They are looking to add compression to remedy this (already in mobile eDP 1.4). Otherwise the only choice is Chroma Subsampling which chumps lines and saturated colors.

Third tab of this sheet.

I have 10 Bit movies and anime.
so not sure if it will need special Video player (used VLC )
but I did compare the video playing it in 8bit settings and 10 bit settings (nvidia control panel settings )
and I saw a difference .