Does anyone know how to fix a memory leak issue?

I bought the Garmin Vivofit 2 on eBay for $29 manufacture refurbished, $129 retail for a new one. Great buy works great but there just one problem. The Garmin Connect mobile app for iOS apparently has a massive memory leak issue. Works the first time then if you try to open it again it requests too much memory and the system crashes it. There have been no updates to fix this, it's a well documented problem in the Garmin support forum and they don't seem to care. I can't code, don't know how to, otherwise I'd fix it myself. Can't load the crash log, goes way over the character limit, I'll email it if you can and wish to help me with this. Thank you!

Have you tried the 'purge' command? It won't fix the app but might force it to release RAM it no longer needs.

No, can you guide me through it? Already have MobileTerminal installed.

Doh! I misread your original post and missed that you are on iOS not OSX. I don't think there is a purge command in iOS unfortunately. In OSX it's simply 'sudo purge' and the cache gets flushed.

I imagine that you will need to use an app for the same in iOS or this might work: http://www.idownloadblog.com/2015/12/15/how-to-purge-iphone-memory-without-rebooting/

It's not a proper fix for your app though, just a workaround that might help a bit.

If it is a true memory leak they will have to fix it because it is in the code and there isn't much you can do about it.

It's was reported in the forums a year ago and the problems still there, no updates since then.

I forgot to note that I'm running a jailbroken iOS 8.4

Yeah, you will get little to no help on the issue then. It is most likely one of two things and neither of them is a good answer for you. 1) There is a genuine issue with the app and if after a year it was not fixed, the company has abandoned the product. 2) The issue was not actually with the app but instead how iOS handed the code which may have been resolved in further iOS updates. If you can upgrade a jailbroken iPhone I'd suggest that, but it sounds like you might not be able to. I'm not 100% sure how jailbroken iOS devices work.

Yes, Garmin has completely abandoned the app. The only difference between stock iOS and jailbroken iOS is that after the jailbreak you have root access to everything. You can even mess with the code from every app. Thats why I'm asking is anyone knows how to read a crash log and implement a fix. 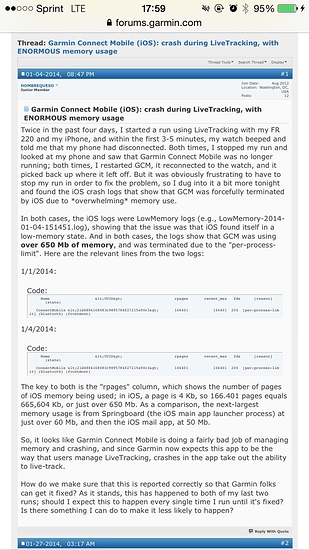