Do I have my head up my ass, electric boogaloo

I’ve increasingly becoming obsessed with finding the problems with crypto currencies. All because I’m a salty bitch about GPU pricing. Even with that said though, it’s become pretty clear that even if bitcoin does work out it’s technical problems to actually be usable for purchases in a global sense it will do it without the original vision of the currency not beholden to any state, bank, or company.

The biggest problem is the lack of any failsafe for centralization. Both in ownership and mining power.

The biggest issue is that of mining power. You can go to blockchain.info to see a general breakdown of mining power distributed. It isn’t perfect, but best I can tell it’s the best indicator of distrobution of power right now. For decentralization it’s not very good. Comprimising 3 pools is all it would take to control 51% of the mining power. It’s still better than it was in 2017 with China shutting down mining operations. But it seems those large players are coming back in different regions according to https://www.bloomberg.com/news/articles/2018-01-05/bitcoin-miners-are-shifting-outside-china-amid-state-clampdown

I couldn’t find a lot of info on the connections between pools, but with the information in the article above there are two entities, BTC.top, and ViaBTC that are directly connected, meaning that split is superficial making them 20% of the mining power. Most likely meaning even more of these pools are connected in some way. BTC.com can already do selfish mining. Making it easier to hold proof of work hostage, or destruction of the coin itself if it gets too crazy.

Then there’s the distrobution of coins. if bitinfocharts.com is to be believed we can already see that 2 wallets own 2% of all BTC and 0.01% of wallets own about 40% of the coin. Is there anything wrong with that? If you’re of the capitalistic bent, no, there isn’t. If you really care about the coin itself I think you might notice that it creates the ability for people to manipulate the pricing of BTC.

Then the biggest problem I always hear people brushing off is the issue of transaction limits. This will tie closely with the previous issue. With the current block size and block time 7 transactions can be made per second, but that is extremely small compared to what would be needed for the United States alone (Sorry to all the countries I don’t live in.) With the 2016 Payments study from the federal reserve showing 96 billion transactions (around 3000 transactions a second) from credit card, debit, and prepaid debit cards alone.

This means bitcoin would have to increase it’s number of transactions 434 times it’s current rate. If we tried to decrease the block time to one minute we can get 70 transactions, and if we increased the block size to a wopping 44MB would be able to cover that, but in terms of worldwide usage (the proper step to creating a less malicious currency on the road to better solutions) it would need to be much much larger. I’m unsure if it’s possible to make blocks of the same size with more transactions. If anyone wants to let me know if that would be possible post it.

“But as a fix we hust make the block size bigger, nbd right?” So long as that doesn’t sacrifice security it might be, but it ties back into the first problem. All miners need the full blockchain ledger. Back in the day this wasn’t a problem, and currently isn’t. The blockchain sits at 189.45GB. Not to much an investment for miners to get an SSD for that size. In a years time though miners will have to pay for even larger SSDs (raid their SSDs with others of the same size.) For anyone already mining it might not be to big a deal, but for anyone wanting to join in it makes it that much more expensive. This will become a problem at some point no matter what in two ways.

If you increase block size, or decrease block time, you exponentially increase the amount of data needed to be stored by the miner. Just for the stat I listed above in 2015 for the US, not any other transactions, the blockchain would be 22.785TB. That’s not even all the transactions in the US for that year. This obviously makes mining impossible for the normal person. Effectively destroying the decentralization of the network. So you can pick one of two things, either make bitcoin usable in daily life, or have the possiblity of decentralization.

Then there’s power. Mining bitcoin (and alt coins) has become an arms race since you can make money from it, obviously. Getting stronger and stronger machines to just mine bitcoin. This spikes the difficulty, spiking the demand for stronger hardware, increasing the energy costs, without doing any extra work. Just doing the same thing that would have been done with a fraction of the power. and when you have thousands of machines that can and will use 1450watts of it’s 1500watt PSU that power usage becomes extremely wasteful. Which brings me to ASICs, and that shit isn’t pretty.

So bitmain has a strangle hold on the market for bitcoin mining hardware. They make the antminer ASICs. They always sell out from mining companies buying them all so people can rent out the miners. But then segwit came, and the bitmain’s patented asicboost (makes mining faster) wasn’t compatible with it. So bitmain created Bitcoincash (BCH ,a fork of bitcoin) so that they could make use of their own hardware better. Creating an coin entirely based on profits.

Then there’s http://www.antbleed.com/ . Tells you exactly how trustworthy the company that, from what I hear, makes the hardware for easily over 51% of the mining power. It’s been rectified apparently, but more than likely they’ll just get craftier. Someone let me know if it’s even legal to run custom firmware on these. I’m really fucking done looking up more info. Everything is just about what is and isn’t profitable.

With all of this it’s pretty evident that it is becoming increasingly impossible for decentralization to continue unless; you can diversify the hardware, keep the system requirements down, and keep a reasonable spread of bitcoin through out all wallets.

So if bitcoin was intended to be some stupid fake internet points to make money from the get-go I don’t think I’d be upset as it’s doing a great job of that and isn’t feeding on the good intentions of some. Maybe it always was and Satoshi is a lying goblin, but there are still a shit ton of people out there telling me it’s the goddamn future that will save the planet. Where everyone is their own sovereign bank and only the community has say in what does and doesn’t happen. Except the community has spoken, and they said fuck you, pay me, I don’t actually give a shit about any of that let me turn electricity into money.

Except for the extreme users (hats off to you guys who actually pay for things with bitcoin and use it the way intended, sorry it’s going to blow up in your face) most people while spouting the shit above just use it like an extra part of a fincancial portfolio and do not give even the slightest thought to the original intention until you say something about how nasty the whole thing has become.

There’s my tree fiddy. I know lightning networks are a thing and it’s going to do so much for the scaling or something. I didn’t touch on exchanges at all. I think they’re also against the original intensions of the coin, but I don’t want to get into that mess.

TL;dr bitcoin and more than likely all other altcoins are trash and broken and nothing can fix them. take that all you reddit posters that keep flinging your monkey turds at me.

I’m still waiting for the 2.0 version of bitcoin where all the problems are fixed. I think a decentralized universal currency is the way to go, but the current implementation was a good first attempt.

I wholeheartedly agree. It’s a fantastic step in the right direction, in principle. The execution currently is not, and the current trends say it isn’t moving that way.

Ethereum on the surface seems to take care of these issues since it doesn’t need the entire chain, but I remain reserved since I don’t understand sharding and pruning and the like.

Lets just do a nuts and bolts style system via ratchet and clank.

I think a decentralized universal currency is the way to go

Jup, the current situation reminds me of the first social networks (friendster, anyone?) that were a good first attempt and proofed the concept could work at some point. As of right now, it is global effort to waste electricity.

I wonder if it’s possible to create a dual currency that uses 2 blockchains. One blockchain could focus on decentralization and value while a derivative blockchain is optimized for transactions. The first coin would act as the value standard for the second. Sort of like how traditional cash used to work with the gold standard. Paying for things with gold bars is cumbersome but it’s what allows easy cash transactions to take place.

You kind of see that happening informally with the coin exchanges. Mine some monero, exchange it for bitcoin or ethereum… to my knowledge, there isn’t a coin that uses 2 separate block chains like this though.

That said, I am not an expert by any means.

This could just be a particular type of wallet and support value store and transaction focused coins, for example BTC and ZCL.

To keep things safe IMO it could work using a combination of at least 2 hardware wallets, and software light wallets or something like bitcoin-core with TX indexing.

I think that’s essentially what lightning networks do, except better from what I read. You’ll have just one transaction put into the blockchain, but between the two parties you can make as many transactions as you want since it will only give the ending totals to miners to be verified.

yes but there’s some things not to like about Lightning, maybe the main thing is that everyone’s wanting to ‘solve scaling problems’ like there must be only one coin in the end. In the world of finance there are issues with supremacist attitudes and lack of depth in technical understanding which makes them act like monotheists. IMO anyway, learning lots day by day in this area

One coin is pretty much the way it would have to be. You could split up coins based by geography and state, but then you introduce a whole new measure of complexities like California coins being worth way more than south dakota coins, conversion rates, and a whole bunch of different ledgers. Ideally I think you would have the hardware split-up like that, but not the coins themselves.

Am I the only person here that has no crypt0-c01ns?
It’s still classed as an emerging technology and many things can change in the coming years if we survive.

Am I the only person here that has no crypt0-c01ns? 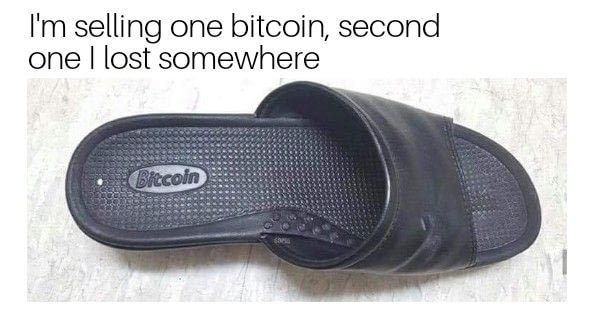 dont have any either