Is making a diy fully copper cpu cooler possible? all the cpu heatsinks, all the good ones that is meaning theyre not ugly, theyre not passive, theyre not too small etc, are aluminum. this is assuming i can weld stuff together and what not and have access to the right tools.

Linus and Luke from Linustechtips are doing exactly this in their scrapyard wars series.

Sure it's possible. All you really need is a flat block to make contact with the CPU and to act as a base, and some way of transferring the heat away. Be that heat pipes connected to fins, thicker fins connected directly to the base (or machined out of a larger block) or a water loop/radiator... they all work to varying degrees. Then you just need some way of connecting securely to to your motherboard. Whether or not it's worth the effort when you can buy a decent one for 30 bucks is up to you.

Some company beat you to the punch of a fully copper cpu cooler.

yeah but its kinda ugly dont you think? also out of stock and it has less heat pipes and less fins as well, plus i was looking for a low profile one.

well see my problem is how would i make the heat pipes and the fins?

I don't think it's terribly ugly. If you don't like that shade of light red, avoid copper.

The aforementioned and linked copper tower cooler would seem to support that, it's fins are aluminium. According to the page anyway.

isnt that just because aluminum has a lower heat capacity? so more heat is able to be stored in the copper which is why its harder to dissipate the heat.

well if that is true, then i guess maybe a copper plate in combination with an aluminum fin array.

Well, you could machine a single block type heat sink similar to this:

They used to use them on CPUs, now you mostly see them on northbridges and the like. A better idea would be to make a copper block to make contact with the CPU, and then machine the heat dissipators out of an aluminum block and attach the two.

As far as making a standard heat pipe/fin type heat sink, get some copper tubing (maybe, 6mm?), seal one end, fill 25-30% of it with water, heat the water to boiling and seal the other end quickly. (easier said than done I'm sure, google around for the best method, maybe an endcap filled with hot solder? also be sure to wear some thick gloves). As it cools, this will lower the pressure inside the tube, allowing the water to ex-gas (boil) at a lower temperature than the normal 100C. This will allow it to turn to gas at standard CPU temps, travel to the cool end of the pipe, convert back to liquid and transfer it's heat in the process. Do this 4 times, and attach the pipes to a copper block (which will make contact with the CPU).

After that, get some thin aluminum sheets, cut them to size and solder them to the copper pipes. Then, you just need a bracket for connecting the whole thing to your MB, and you're set. Probably wont work as well as a lot of professionally made heat sinks out there, but it should work none the less. At least in theory lol. Proceed at your own risk.

Is making a diy fully copper cpu cooler possible? all the cpu heatsinks, all the good ones that is meaning theyre not ugly, theyre not passive, theyre not too small etc, are aluminum. this is assuming i can weld stuff together and what not and have access to the right tools.

So you want to build a passive cooling solution, out of copper, for your CPU? It might be possible, but I don't think I would try it on an expensive CPU, when you are testing. Perhaps the unlocked Pentium, or an I3?

This is partly true! But it is more because copper is upwards of three times as dense as aluminum, so if you do not construct the heatsink properly, it will act more as a heat capacitor, without the proper wicking action. In terms of strict physical properties, copper is still slightly more emissive than aluminum.

Aluminum has two big advantages: it's cheaper, and it's lighter.

Back in "the day" when the the Thermalright Archon, and its derivatives, were the goto enthusiast cooling product, Thermalright put out the "TRUE Copper" product. ( Sweet baby jesus, just look at this thing.) It was a True Spirit-design heatsink made out of copper, and of a limited run. It was stupid-expensive, and stupid-heavy - almost 2kg. I think Xbitlabs did a review.

Yes you can make your own heat sink. Also you can made it by copper. Nothing to do extra, it will be the same like as the aluminium heat sink. But the copper will increase your cost. It is much costly than the aluminium and also bulky. It is always better if you go for the aluminium.

A better idea would be to make a copper block to make contact with the CPU, and then machine the heat dissipators out of an aluminum block and attach the two.

You'd take a small hit in heat conduction from the copper to the aluminum, but aluminum doesn't hold heat like copper does so the fact that it would cool faster would actually mean it would pull more heat away from the copper.

I would consider this the ultimate geothermal CPU cooler.
I have always wanted to try this, but haven't had the need to re-pour my foundation.

Yea the sad thing is Diamonds are really common now. The price to rarity doesn't match. You can think the Debeer's for monopolizing the diamond market and only releasing new diamonds every so often to keep the price high. Why doesn't another company just open up and make the price of diamonds low? Because Debeer's owns all the diamond minds in Africa. If you try to try to flood the market with diamonds you will be blacklisted by the Debeer's and no one will buy from you. Need to read this. 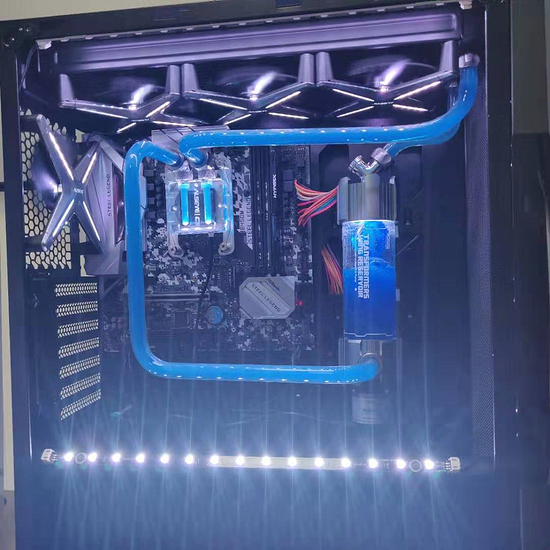