Diminishing Returns for cooling in Laptops

Hi, just a quick question here. Not sure if its a straight foward answer tho. So i have a yoga book 12, just got it. And its running a little hot. At first with an AIDA64 test it would hit 100c and throttle. I flashed the BIOS on it and it gave me fan control, but it still runs hotter than Id like it to. Tempertures are hitting around 85C on AIDA64. Now i know this is a worst case, but I was wondering if it was worth it to tear this machine down and apply new thermal pads/ paste. Would it be a big improvement? Is it worth it? the cooler is a single heatpipe connected to fins and a fan which blow out the back of the machine. The intake is on the bottom. I know there WILL be a temperture difference i just would like some insight or guess as to how much. Is it worth spending 35+ dollars on LM and Thermal Pads? Is LM even safe in a laptop that is used day to day and tossed around in a backpack.

depends. Thermal paste can vary. Probably worth a shot if its not too hard

So I bit the bullet and bought Thermal Grizly LM. I will post results just for documentation. By the way anyone know any decent but still cheap thermal paste for computer repair. I get the best I can get when it comes to my hardware. But when Im fixing other peoples sutff, I dont want to spend 10$ on thermal paste if i dont have to.

If you’re constantly running CPU intensive stuff on a yoga book… you’re kinda using the wrong hardware for the job.

By all means, give it a shot, but i’d consider it not worth the hassle to be honest.

No its only when i benchmark. But id like this to run cooler anyway.

Anyone ever encounter a problem where the fan connector just won’t budge? I don’t want to break anything. I’ve tried everything off the top of my head. 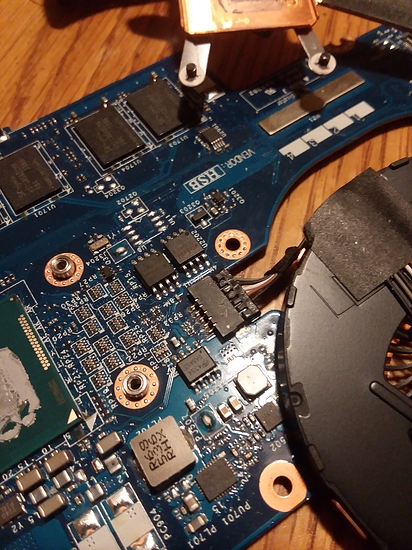 Well I mean linus put liquid metal on the i9 macbook and it became a good machine so anything is possible.

Lol I think I ACTUALLY fried it. I’m having the dreaded 2 bios beep error code with a black screen. I’m not sure where I went wrong

now it’s just a paperweight. At least it was free.

Okay so doesn’t look like I fried it. It seems to me that there was contact between the chipset and the CPU on the heatsink side. So basically the liquid metal was connecting the two and shorting them out.

Just make sure the heatsink isn’t aluminum otherwise the LM will eat through it.

Does this mean it’s been munchin through the heatpipe? 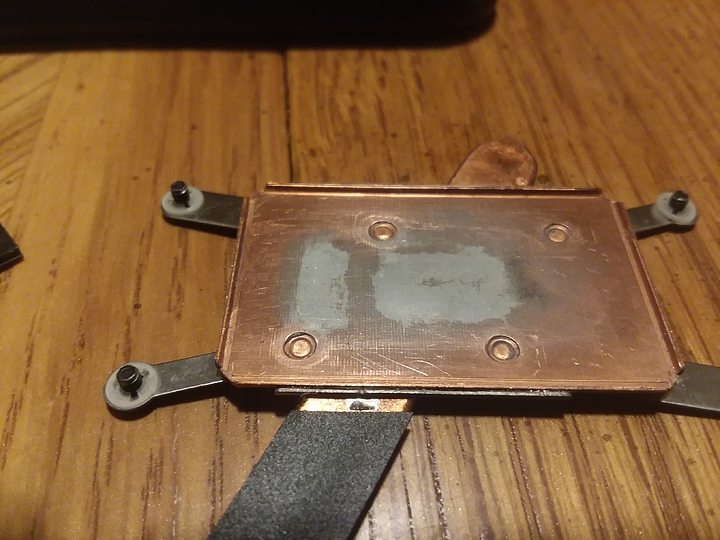 No, this very much looks like copper or a high copper alloy. Discoloration with LM on copper is normal as the Indium/Gallium diffuses into the surface layer. There is no negative effect over relevant timescales with LM and copper. Discoloration looks worse than I would expect for 5 days but it should not have a negative effect (it almost looks like there is still thermal paste on it. Did you clean it properly beforehand? Might be my bad monitor.). GamersNexus did some extensive tests with liquid metal and copper heatsinks and did not see any negative change over (I believe) a two year period.

yes looks like you didn’t clean it thoroughly enough, the machine marks on the copper seem to disappear beneath the grey looking part. In case you cleaned it properly, don’t worry about it, even if it bonded to the copper after some time, its probably only a very thin layer and you can apply thermal paste without penalties

Yes I cleaned it very well. Okay good to know. I was just worried because it REALLY stained the heat sink

laptops are notorious for build-up of dust grizzly bears on the fins of the cooler.
some iv’e removed reminded me of a felt pad!
when removing a cooler from a cpu carefully clean all the residue of the paste from both the cpu and the cooler heatsink, and apply a thin film of thermal paste to the cpu only!
excessive thermal paste will do more harm then good!

So how has this been working out for you?

Everything is working just fine. I have yet to run into issues. I would take it all apart and look at it but I don’t want to use more LM.