This actually started back in November, but I thought I’d share.

I’ve been working on a Dockerized Bup back-end with a friendly and simple web GUI to manage scheduled Bup backups. Specifically, I’m creating this to run on my unRAID server, and to manage archival/backups with it.

“Aren’t there many backup solutions available for unRAID? And what’s the point of dockerizing a simple command-line tool?” Good questions.

As to why I’m using Bup at all, it’s rather arbitrary: I like it, it interops with git, and it does pretty much everything I think a backup system should do. The problem is that Bup doesn’t have a release candidate for Ubuntu (I’m running Pop!), and about an hour into trying to install it from source I threw up my hands and decided to containerize the bloody thing so I’d never have to deal with it again.

I ended up using a stack containing some familiar, and some unfamiliar tools in order to make it a learning experience:

So far, I’ve built a containerized environment for Bup, where you can mount source + backup volumes to interact with. Configuration is done via a web interface, and scheduling is manged with cron syntax. 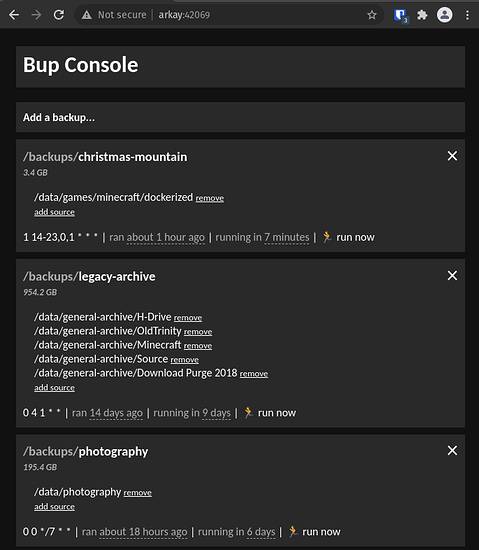 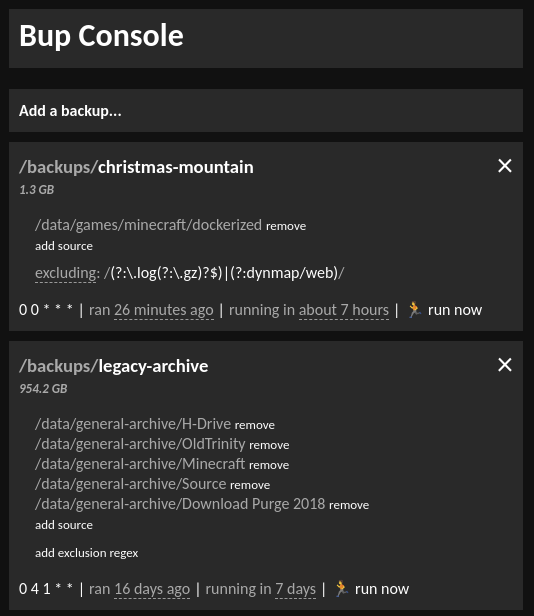 I like the polish on this project, that alone helps a project be successful, even if your the only one using it (because its nice to use). Cant say the same for mine, except the code and the blog entires

Its really nice to see this sort for project get exposed via #devember2021 as it integrates with something alot of people may already be using. Thanks for the headsup about Preact too, that might just be enough for me to finally look at it again

I like the polish on this project, that alone helps a project be successful, even if your the only one using it (because its nice to use).

Thanks! I try to make all my software a pleasure to use, it’s just that most of the time that’s more a matter of API design than UX.

Whenever I get the chance to work with end-user-facing functionality, I like to experiment a bit and try to make something nice.

In this case, I wanted to go with all-text (except the emojis), and so I tried to find other ways of giving the user cues - all of the interactable text elements are white instead of grey, and elements with tooltip context get a dashed underline.