So I just rebuilt my pc to support sli, and the new mobo I'm afraid has a dead pcie slot, both gpus work when I plug them into the first pcie slot but neither work in the second slot. The cards will power up but not show up in the hardware monitor or the bios, it's weird though because even when I don't plug in the gpu with the psu cables it will still power up just from the pcie slot alone, so is there anyway I can get it to work or should I just replace the motherboard (which I really don't want to do unless I have to)

Hmm... Sounds like it's either a PSU issue or a mobo. Have you tried just one GPU in the second slot. If yes, then it's the mobo and you'll need to replace it.

Have not tried it, will do when I get home from work and get back to you

Alright I just tried with the card in the second slot. Nothing shows up on screen but when I unplug the card from the power supply and just leave the csrd in the slot and boot up the fans still kick on so that's why I'm thinking the slot isn't dead.

No probably not... Though the GPU works in the first slot while connected to the PSU??? It could possibly be a BIOS issue. Update it and see if that helps anything. It could be your PSU though I doubt it. If the BIOS update doesn't work, I'd see if you can get your hands on another PSU and try swapping it out.

Can you please post you system specs on here??? Could also be a compatibility issue.

Ran into this issue on crossfire a while back and also thought i had a dead slot but it wasn't try clearing out the drivers and reinstalling.

This should show you how to flash you BIOS for your mobo.

a single card in the second pcie slot results with nothing showing up on monitor, both cards work fine in the first slot, haven't been able to test the sli bridge because mobo hasnt been detecting the second card, and i dont know how to configure that in the bios

You could go into the bios, then click on settings > advanced > pci subsystem.
Check the settings over there, and take the mobo manual by hand.

I go into the pci subsystem but dont really know what to do from there, and my manual doesnt have any info on it, it gives me a list of different options for pci latency times, and I don't really know where to go from there. (Sorry I'm pretty bad with this stuff) 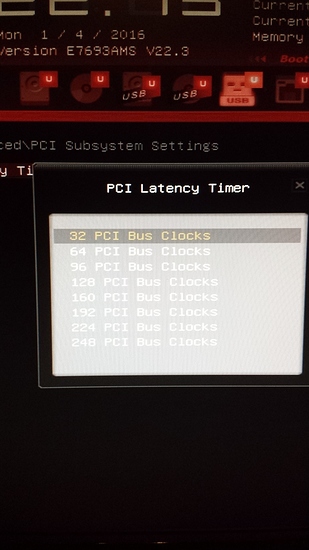 Basicly the pci-e slot settings in the pci subsystem should be set to auto.
Then it should work as far as i know.
You could also check your motherboards bios manual for additional information about pci-e configuration.

you also need to connect the sli bridge, and enable sli in the Nvidia control panel.

If you cannot get it to work, then there might be some issues with the pci-e slot.
Then you could contact the re-seller or Msi and send it in for a rma.
Msi seems to be pretty good with rma´s.

Alright thanks so much for all the help, if I can't get it tomorrow I'm probably just gonna send it back

Ok, it's unlikely that it's your PSU. Probably a mobo problem...and the bios updated didn't fix it either. Weird...have you tried contacting MSI support??? I'd recommend giving them try before you send it back.