Hi everyone, I’m looking for a collective wisdom as I’m having a really bad day here.

Back in April 2022, I’ve started to have a growing amount of issues with my btrfs reporting rising amount of .corruption_errs that eventually resulted in complete FS lockdown all the way to read-only mode and a jump in a thousands of .corruption_errs on a git pull. After investigation, memtest86 was reporting around 800-900 errors during the run. After sending this information to G.Skills I’ve got memory kit RMA’ed back in May and I’ve received a freshly produced (May 2022) memory kit back.

Everything was running smooth and snappy until 2 days ago. Around 5 PM local time on a Tuesday having a bunch of work window open, apps started to crash randomly (Complete Chrome and Firefox crashes, random tabs crashing, VS Code instances crashing etc). I’ve left the memtest86 running overnight and the results are… 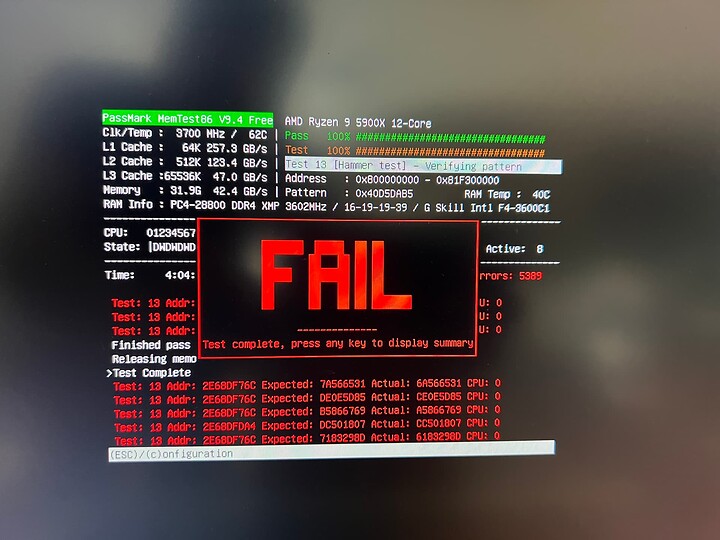 I already wrote to G.Skill again, but something tells me that corrupted memory is a just a symptom and not the root cause, however it’s so difficult to contact support and reach someone adequate to talk to, so in parallel, I’m looking for other ideas, what could be the problem.

Any one has any ideas? Is it possible I’m just unlucky with a second kit as well?

Have you been able to narrow it down to a single stick or slot? Tried disabling XMP?
I have had an x99 board that would not run with XMP above 3000 but only if there was a stick in channel D. It could be a board issue, it could just be bad luck with memory kits.

I have not tried disabling XMP this time, last time it made no difference. Also I’m having a only a single XMP profile, so nothing to play around there. I’ve tried to swap memory modules, at least crashes stopped in last few hours, I’ll leave a memtest overnight again in this configuration and I’ll try stock jdec settings tomorrow just to see if it makes the difference

Try running at JEDEC speeds, if it still fails I’d recommend you to get another stick of RAM just to verify that it CPU and/mobo isn’t at fault.

enter the relevant details and die type.
then click calc safe.
take a pic, go to bios/uefi and enter all the timings shown… you may even need to change ohm values.
but after you should get safe timings that are more stable than even jdec.
(at least that was the result for me with my long running 2700x ram error problem. (using inbuilt jdec’s)

I have almost same spec wife’s PC and I already tried her RAM last time, for a short test (about a week) it was working perfectly fine. She has same MB/RAM model, different (5800X) CPU. My memory in her setup also showed errors.

It does not run on Wine and I don’t have windows installed. I’ll try to create Windows2go drive and will try it out there.

So, yeah, basically same everything as the last time. Running without XMP (at 2133 MT/s) shows no improvement, 88 errors in first 7 minutes of memtest86.

I guess G.Skill will agree on another RMA, but what’s the point if it will all break in another few months…